The Crikey contest swings to the Coalition

There's little doubt about which side Crikey readers think has finished off the campaign better.

There’s little doubt about which side Crikey readers think has finished off the campaign better. The entries this week in our Election Tipping Contest have strongly favoured the Coalition in 16 of the 20 marginal electorates where they were asked to pick the winner.

The new votes have moved an extra two seats into the Tony Abbott win column since the beginning of the week to make that total 15. Only in Victoria and Tasmania have the late votes gone in Labor’s favour. 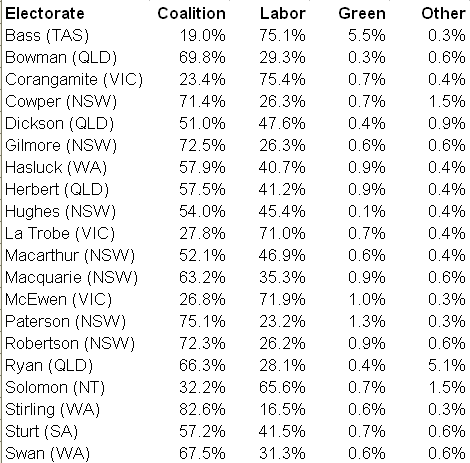 I will be intrigued to see if the trend towards the Coalition continues when entries close at 6pm Melbourne time tomorrow. I should be able to give an update on the Crikey election night blog quite soon after closing time .

In the meantime. if you are a Crikey subscriber get your entry in. It’s free and there’s a $5,000 first prize to be won along with other goodies.