Just because us political wonks and news junkies are enthralled in election madness, doesn't mean the rest of the nation is. Plus, FT counts its audience and other media news of the day.

There’s an election tomorrow? Just because us political wonks and news junkies are enthralled in election madness, doesn’t mean the rest of the nation is. A quick squiz at the top news stories on the major news websites around the country shows only some people are loving the election. 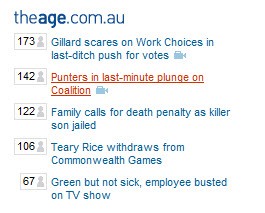 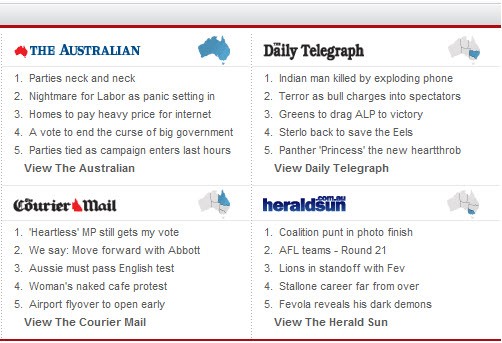 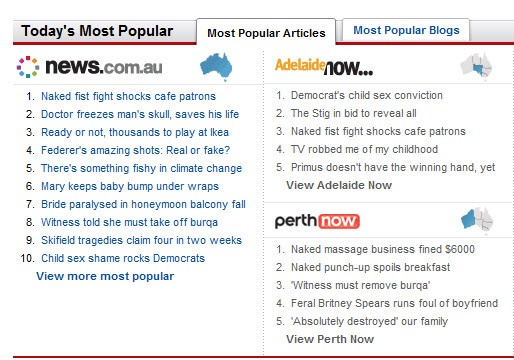 Remember Chatroulette? It works at least as marketing

“Among all of the weird characters you can encounter on popular random video chat service Chatroulette, pretty girls are a breath of fresh air, right? Well, it depends: for users who’ve stumbled upon the viral video campaign from Lionsgate, promoting their latest horror movie The Last Exorcism, what started as a pleasant chat ended very … unexpectedly.

We won’t spoil it for you — check out the video below (be advised, it contains strong words and unpleasant imagery) to see the best reactions of Chatroulette users.” — Mashable 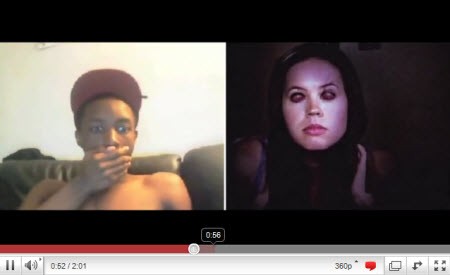 “With e-reader prices dropping like a stone and major tech players jumping into the book retail business, what room is left for publishers’ profits? The surprising answer: ads. They’re coming soon to a book near you.” — WSJ

“The Financial Times has launched a print and digital circulation measure that calculates the total number of people who access paid-for FT content each day. The paper believes the measure is the first of its kind produced by a media owner. Online statistics will be released every quarter in addition to ABC statistics on print circulation.” — The Guardian

“German magazine Sueddeutsche Zeitung (the title can be loosely translated as “This Is A Periodical For Those Who Own Cats Or Are Simply Delighted By Photos And Stories Concerning Their Activities, Particularly When They Are Still Kittens, Plus There Are Many Columns Offering Advice And Personal Anecdotes”) has created “the world’s first mobile augmented reality special magazine edition.” Look! You can finally get alt-text tags into print! Industry: SAVED.” — The Awl

“Intel and McAfee shocked the tech world this morning with the announcement that Intel is acquiring McAfee for 7.7 billion dollars. The initial reaction from analysts and industry experts is confusion — or maybe cautious scepticism — as the tech world tries to understand how a company synonymous with processors and computer chip technology will make use of a major security software and services organization.” — PC World

“Michael London’s Groundswell Productions has teamed with producer John Morris to acquire movie rights to the Ken Auletta book Googled: The End of the World As We Know It. They will use the book as the blueprint for a feature film that tells the story of Google founders Sergey Brin and Larry Page and the fast rise of the juggernaut web business that made them billionaires.” — Deadline