Greens lower house hope Adam Bandt has rejected Julia Gillard's claims that a vote for the Greens in Melbourne is effectively a vote for Tony Abbott, telling Crikey he would work hand in glove with the ALP if elected tomorrow.

Greens lower house hope Adam Bandt has rejected Julia Gillard’s claims that a vote for the Greens in Melbourne is effectively a vote for Tony Abbott, telling Crikey he would work hand in glove with the ALP if elected tomorrow.

In a last-ditch ALP campaign letter sent to voters in Melbourne yesterday accompanying a suite of policy announcements, the Prime Minister warned constituents thinking of flirting with Bandt that “voting for anybody but Labor puts us at risk of an Abbott government.”

“This election will be close. The result in seats like Melbourne will determine which of the major parties forms government,” Gillard wrote.

This morning Bandt held a special press conference at his Brunswick Street office to refute the claims and re-assure voters that he would stick with Gillard if he emerged as a kingmaker in a minority ALP government. He told Crikey that “my approach to the situation where my vote was to matter is a clear preference for a Gillard Government.”

The former industrial lawyer slammed yesterday’s letter as “the last shot that Labor has left in its barrel.”

“They been unable to put forward a positive vision for either the country or the electorate, so it’s unsurprising that they’re resorting to a fear campaign…a vote for the Greens is a vote to keep Tony Abbott out.”

But a Labor strategist hit back, saying that if the ALP ends up on 72 seats in a hung parliament, then Bandt’s presence would deny Gillard the keys to the Lodge.

“Adam can’t have it both ways, if he gives Julia a rolled-gold guarantee that he’s going to back Labor than there’s no point electing him because he will not have any voice. If he’s going to horse trade with independents then by definition he is calling that [solidarity] into question. His campaign is diminishing Labor’s chances of holding government.”

But Bandt said that different scenarios would be “hypothetical” and that he and the party didn’t want to get too far ahead of tomorrow’s count. He said this morning’s Galaxy Poll suggested that Labor would seize power in its own right, rendering the hung parliament hypothesis potentially meaningless.

The ALP’s suggestion appears to rely on the double hurdle that in the event of a hung parliament, if three (and possibly four) conservative-leaning independents decided to make an in-principle decision to back the party with either the majority of seats (or a majority of the two-party preferred vote), and also disregarded Bandt’s pledge to support the ALP, then Tony Abbott would emerge as Prime Minister.

While the three independents — Bob Katter in Kennedy, Rob Oakeshott in Lyne and Tony Windsor in New England — have agreed to caucus together, it is likely that one or more of them could cut a deal with Labor powerbrokers when Gillard is called upon to form a government, and another may be lured by the extra cash and perks of the Speaker’s Office.

Psephological experts contacted by Crikey said that the most interesting scenario would be if Bandt and the three independents were all elected and Labor and the Coalition emerged with 73 seats each. In that instance, one of the independents, possibly Oakeshott, would be courted as speaker and Katter and Windsor would be offered trade-offs by Labor to form a minority government in what would amount to a classic prisoner’s dilemma.

Independent speakers have previously proven popular at state level, most recently in New South Wales in the case of Richard Torbay. The prospect of Katter as speaker would certainly be amusing for Question Time watchers, while Windsor has specifically ruled out taking on the gig.

Alternatively, if Bandt was elected, Labor snared 74 seats and the Coalition 72,  Oakeshott or Katter as speaker would hand the Bandt-ALP coalition a potential 1 seat buffer. If that failed, with Bandt pledging loyalty, then Gillard would re-commence horse trading with all three independents.

Other experts said that a 74 seat result for the Coalition would almost certainly guarantee them government, whatever transpired in Melbourne, because Tony Abbott would only require one independent to side with him. However, a fly in the ointment could be the situation in Parkes, in which former Windsor staffer John Clements is rated a reasonable chance.

Meanwhile, back on the ground in Melbourne, Labor and the Greens continue to trade blows in the hours before the polls open, with a mysterious green paintball attack last night on Bowtell’s Australian Services Union headquarters in Carlton. 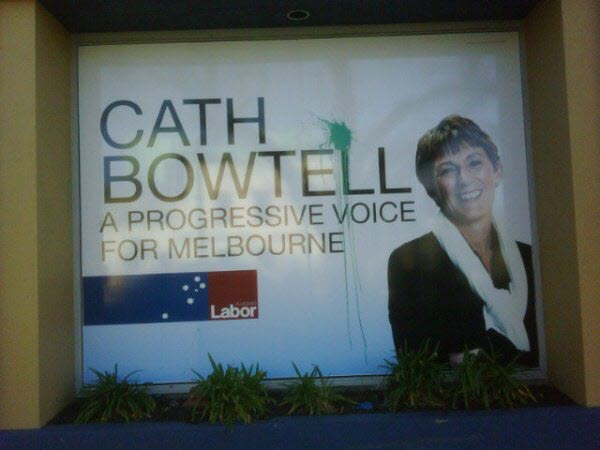 ALP staffers said they arrived at the office at 7am this morning to discover the splodge and could only speculate as who was responsible. However, a similar overnight assualt on Adam Bandt’s face at the ETU suggests either a renegade group of climate hardliners, or mischief makers from the media desperate to inject some controversy into a campaign that has so far avoided a descent into undergraduate mischief. 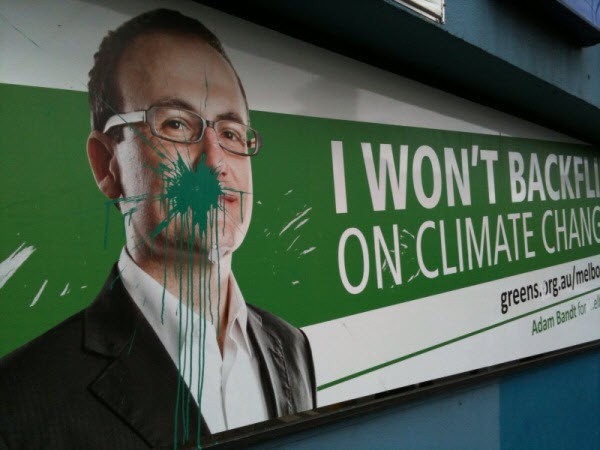 Spokespeople from both campaigns specifically ruled out any involvement in the attacks when contacted by Crikey this morning.

Battle for Melbourne: Greens buoyed by retirement of Lindsay Tanner

If you want to have same-sex marriage in Australia, you’ll have to change the government. As reported by Paul Kelly and Dennis Shanahan this morning:

“Ms Gillard told The Australian there was a substantive basis to her rejection of same-sex marriage. She now rules out any change in her opposition to same-sex marriage during the life of her government. She said she appreciated ‘our heritage as a Christian country’ and believed ‘the marriage act has a special status in our culture’.”

It is hard to know whether she is just a hypocrite, a homophobe, a coward, or all three. However, our atheist prime minister, despite thumbing her nose at the Church by living in sin, is more afraid of right-wing Christian voters than homosexual voters. There will be no same-sex marriage under a Gillard Government. Therefore, if you want to see gay marriage in Australia, you’ll need to vote for one of the minor parties which support it, and you’ll need to send Labor to the sin bin of Opposition where they might contemplate a change of leader and a change to their policy prior to winning their next stint in government.

Adam Bandt would be a terrific contribution to the Federal parliament. He would be the opposite of the “dead wood” that fills so many seats in Parliament. You know the big party politicians: the ones looking over their shoulder waiting to be told what to think and how to vote.

Adam is intelligent, hard working, has vision, and is committed to making Australia a better place for all Australians. That’s why I joined the party. Go Greens!

I second Jim Reiher’s comment. No matter whether the result is Labor, Coalition or a hung parliament, Adam Bandt will be a strong voice on many issues that the major parties choose to ignore.

Was this article written by the same guy who a couple of months back said a hung parliament (with Greens) in Victoria was not going to happen?

A state hanging seems more likely than a federal one.

To be honest, I don’t know why Labor has spent so much time, money and political capital attacking the Greens in Melbourne, especially when Tanner sniffed the wind and decided to get out early.

Another thing living in one of the other Victorian marginal seats (outer-suburban narrowly held by Liberal) I don’t know why the campaigning resources haven’t been spent on this seat which is very winnable for Labor, but the volume of political junk mail is 10 Lib and Lab 1.