Voters appear to be uninspired by political ads, except when the parties go positive, Roy Morgan has found.

The election advertising black out has kicked in, so now seems like a good time to check in with the TV audience to see how the ads played with viewers at home.

Only positive political ads elicited a positive reaction from viewers, new results from Roy Morgan’s Polligraph shows, and the Greens’ ads made virtually no impression at all.

Roy Morgan asked 200 viewers to respond to an array of election ads from the major parties, the Greens and non-party organisations. The only party ad that elicited a positive reaction other than from that party’s own supporters was Labor’s ad on its stimulus spending, which drew a strong response not merely from ALP voters but from Greens voters and “Other” voters. 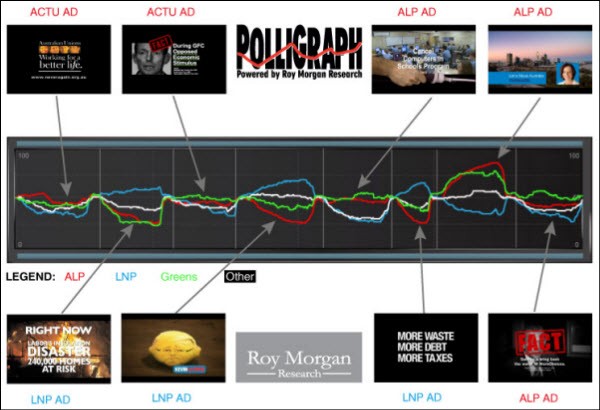 That ad also elicited a more positive reaction from men than from women. The only other ad to elicit comparable support from the Nationals’ ad, with its Mo-Jo-like jingle, which voters from every other party liked, and an ad from the Nurses’ Federation which was not demonstrably partisan but plainly backing Labor. 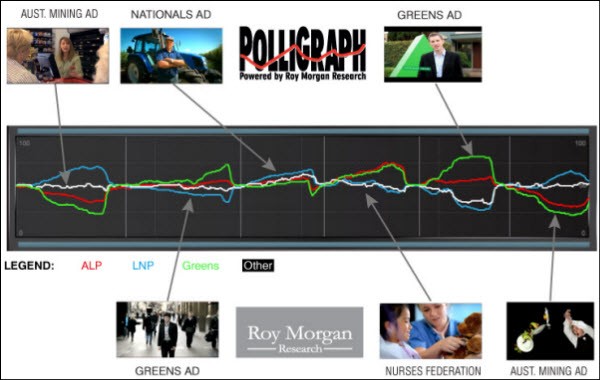 Both Greens’ ads, however — one based on people walking forward when others are walking backward, and a less subtle one urging people to vote Greens in the Senate — seemed to have left voters confused, with only Greens voters reacting positively to it and everyone else apparently mystified.

Roy Morgan also applied the Polligraph to the debate between Joe Hockey and Wayne Swan at the National Press Club last week, but voters clearly split along party lines while watching it. Hockey, who was thought to have narrowly won on style, did get a more positive reaction from “Other” voters. 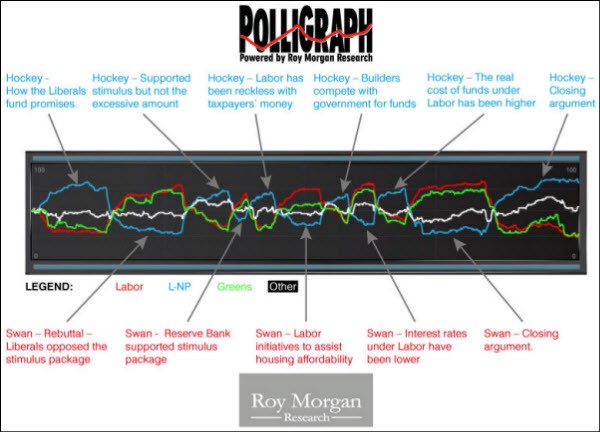 “The only other ad to elicit comparable support from the Nationals’ ad, with its Mo-Jo-like jingle, which voters from every other party liked” WTF???

Might want to rethink the visuals on that one…