Kyle and Jackie O, ornament to democracy. FM radio is hardly the place to seek political enlightenment, but this morning Sandilands and O forgot that an interview is about the guest, not about them. Between them, they spoke for 767 words, two-thirds of them Kyle. The Ranga-in-Chief managed just 742. Number of prime ministerial words […]

Kyle and Jackie O, ornament to democracy. FM radio is hardly the place to seek political enlightenment, but this morning Sandilands and O forgot that an interview is about the guest, not about them. Between them, they spoke for 767 words, two-thirds of them Kyle. The Ranga-in-Chief managed just 742. Number of prime ministerial words about policy? Just 85. Provided a sound bite about Mr Rabbit’s budget not adding up counts as a policy. Which it doesn’t. So zero, then. (Note: Word count may not be precise. Is “rat-hole” one word or two?)

Still, it’s better than Triple M Brisbane’s effort. Two days out from the election the hosts — who ALP campaign HQ’s transcript fails to name — ask the PM such devastatingly incisive questions as “Holden or Ford?” and “Lindsay Lohan or Britney Spears?” Ah, I love the smell of democracy in the morning … — Stilgherrian

I’ll knock out Snowden: Lingiari hopeful Deirdre Finter writes: I notice you are profiling independent candidates over the next few days and would like to point out that I’m running as an independent in Lingiari. However, I am the first serious risk to Warren Snowden in many years. I have just travelled throughout the Territory and there are many people who are angry with his silence over the intervention and the racist policies that have been allowed to continue since Labor took office. There is no real credible Liberal candidate any more — he’s gone to ground since revelations about breaching his domestic violence order.

At Centrebet, my odds have fallen from 43:1 to 29:1 over the past couple of days and, well, I’ve got a video, too, on YouTube. I’m getting a lot of positive feedback from right around the Territory because I seem to be the only one seriously campaigning.  The Labor party hasn’t spent anything on the local candidate because they’re very complacent about his chances.

The Worm in your own hands. No longer solely confined to commercial television studios, the power of the worm is now available on your very own iThingy. Simply tune in to your favourite televised debate and click the happy face for good or the sad face for bad (screenshot: MacTalk): 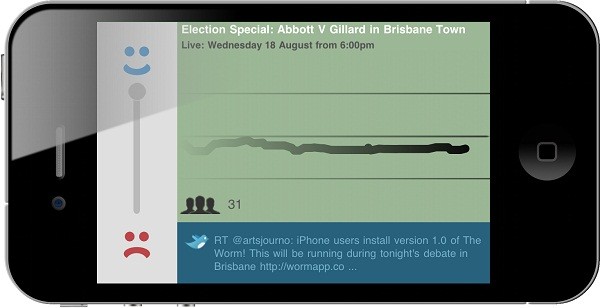 Wentworth via Twitter. This Malcolm Turnbull poster looks very, very green and does not mention the Liberal Party at all. — @honey_banana 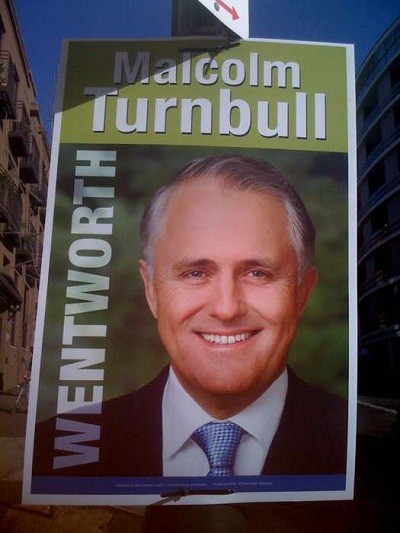 Advertising clash in TV land. One thing that has been really noticeable here in regional Victoria is the number of “client clashes” on TV at the moment. Southern Cross, Prime and WIN are all guilty of this.

The deal with TV ads is meant to be that you, the client, own your ad break. For example, a Holden ad will/should never appear in the same break as a Ford ad. But during this election Liberal and Labor ads often run in the same ad break, sometimes back-to-back.

Excuse the conspiracy theory, but this has happened far too often to be an unfortunate mistake by a scheduler. Presumably this has the OK from some level of management, which suggests contempt on some level by the management of these stations — a belief that they can take the party’s money and not give them the same treatment as other non-political clients. Or, of course, the parties are so awash with money that they accept there are a limited number of ad breaks. I believe the term is fat chance!

The normal practice when a client clash occurs (usually a very rare occurrence) is to run make-up ads or offer a refund. After today surely no party will be interested in make-up ads, so will Prime, WIN and Southern Cross be offering refunds? — a Crikey reader

Leaflet watch. Today I received an election brochure in the mail from a local politician, Brett Raguse, Federal Member for Forde. As we had just moved into the area I was keen to find out which political party Brett represented. However nowhere in the six pages was there any mention of his political affiliation.

There were photos of Brett with local workers, retirees, school mums, on construction sites, etc, but not one with a political leader such as Julia Gillard or Tony Abbott. Even the background colour of the brochure did not provide any hint. If it was blue, red or green I could have guessed what his political affiliation was, but no, it was a very neutral mustard yellow background. I finally resorted to reading the fine print on the back page to discover it was authorised by the ALP. Brett, what are you trying to hide? — a Crikey reader

Leaflet watch #2. As a disaffected ALP voter (voted Green since Tampa) this type of thing in my (Melbourne) letterbox makes me want to puke … — a Crikey reader 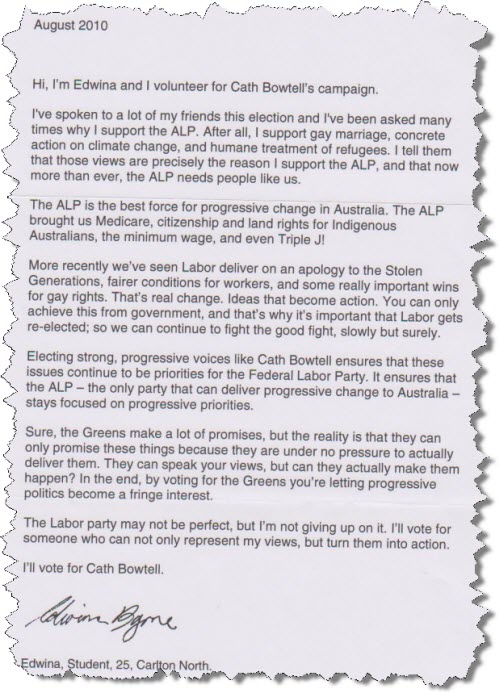 Leaflet watch #3. It seems LNP candidate for Ryan (Queensland) Jane Prentice is not above low blows when it comes to putting her case for election. — a Crikey reader

Leaflet watch #4. Here’s another attack ad sent in by a Crikey reader in the seat of Robertson in New South Wales: 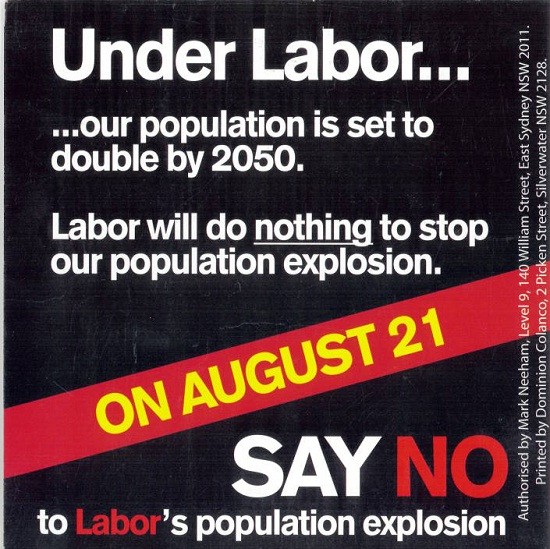 Wood gets fresh coat. Liberal MP for La Trobe Jason Wood has been “missing in action” regarding a range of public forums being held over past weeks in the electorate. The natives have been restless with many residents writing to the local papers asking why they can hear the ideas and policies from the Greens, Labor and even the S-x Party.

This week in the in the Belgrave Mail, the editor gave Wood a right of reply, seeing it was the last week of the campaign. The statement from Wood was that these events are fronts for groups with a political agenda and was not the correct forum for a debate. With no opportunity to publicly confront Wood they managed to “retouch” his prime billboard in Belgrave overnight — a Crikey reader 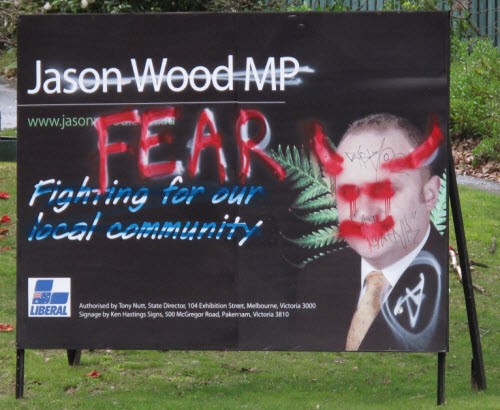 They think we’ll swallow anything
And they’re bloody right.
They tell us what we want to hear
They swear that black is white.

They lie and cheat and change their tune
And we sit there and cop it.
We bitch and moan and tweet “no more!”
But do nothing to stop it.

On Saturday, we’ll pick the one
Who promises the most.
On Sunday, we will bitch and moan
Over our eggs and toast.