Over the next three days Crikey will run a 'Well Hung' series, profiling the independents who could hold the balance of power in their hands. Today we spoke with Bob Katter, the "anti-green" with a heart of gold.

Are we really facing a hung parliament?

According to our expert number cruncher Possum Comitatus’ latest post:

On the issue of a hung Parliament, there are two possibilities — the ALP winning 73 or 74 seats and their being three independents, or the ALP winning 72-74 seats and their being three independents and a Green in the seat of Melbourne. Running a separate dual simulation for these results, the implied probabilities for both scenarios for a hung parliament become:

So a possibility of a hung parliament comes it at between around 16 and 22%, depending on the result in the seat of Melbourne (which, by the way, has been given to the Greens in the simulation).

Best keep our bases covered then. Over the next three days, Crikey will profile the independents who could hold the balance of power in their hands. So far, one of the key points on their shopping list seems to involve bananas. This could get interesting, people.

Today we bring you…

Where? Northern outback Queensland. According to the AEC website, Kennedy covers an area of approximately 562 160sq/km from the Gulf of Carpentaria and Mareeba in the north to Boulia in the south and from the Queensland border in the west to the Pacific Ocean in the east. The main towns include Atherton, Babinda, Camooweal, Charters Towers, Cloncurry, Georgetown, Gordonvale, Hughenden, Ingham, Innisfail, Mareeba, Mount Isa, Normanton and Tully. 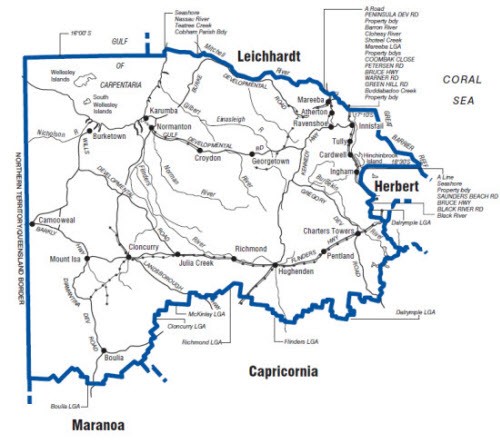 How long has Katter been in politics? Katter was elected to state parliament as a National in 1974 and to federal parliament in 1993, before parting company with his party in 2001. He was an investor in cattle and mining interests before entering politics. His father, Bob Katter Snr, initially won the seat for the Country Party in a narrow victory in 1966.

According to Poll Bludger’s electorate form guide, Bob Katter Jr, “…defeated Hulls at the 1993 election before cementing his position with a double-digit swing in 1996. Katter’s primary vote increased further after he parted company with the Nationals ahead of the 2001 election, and he recorded another strong performance in 2004 and held his ground in 2007. A count conducted for informational purposes after the latter election showed the Nationals would have defeated Labor with a 7.5% margin if Katter’s preferences were distributed.”

And for a bit of colour… Katter’s election ad has been a resounding success, you could even say it went viral….

But enough from us, let’s let the man speak for himself. Deputy Editor Jason Whittaker interviewed Katter this morning:

“You’re not even allowed to boil the billy,” Bob Katter exclaims on the phone from Yarrabah, a little south of Cairns. The maverick independent whose seat sprawls across 30% of Queensland says his constituents are angry they need a permit to light a fire and make a cupper. Property rights, he says, are a big issue.

That and health services — his “intense” meetings across the seat included a man who had to pull out his own teeth because he couldn’t find a dentist — and cost of living pressures. “That really surprised me,” he told Crikey, citing electricity bills as a big impost.

There’s been little talk of boat people, he says, and the “whinging” about city congestion has Katter “burning up with rage”. You could house 60 million people in North Queensland with its water supply, he scoffs (not that he’s advocating that).

Labor has delivered important infrastructure projects for his region, he says; “the Coalition was there for 11 years and they delivered nothing”. As for the national broadband network: “I’m not literate in those things but I’m advised it’s really excellent.”

But there’ll be more on the bargaining table than that if Katter has his say: stopping banana, beef and other primary produce imports; bringing back agricultural subsidies and tariffs; breaking up the supermarket duopoly. “They haven’t talked about rural Australia,” he said. “It’s just been completely invisible.”

“We don’t want adversarial governments. We want cooperative government that isn’t about picky little pre-election lollipops but is about bread, butter and beef on the table, prosperity, long-term prosperity and jobs. If I was piggy in the middle I will deliver the gong to whoever gives my area the right to survive.”

Katter says in the event of a hung parliament the independents will meet in Canberra, possibly for days: “We’re definitely going behind closed doors.”

He’ll even work with the Greens, should Melbourne candidate Adam Brandt get up. There’s common ground on food importation and the supermarket giants. Plus, the jobs the investment in renewable energy and biofuel production could bring.

“Even a hardened, anti-green like myself says over the next 50 or hundred years let’s pull on the reigns a bit, fellas,” the self-described “opposite of whatever a greenie is” said. Climate change, for the record, is still “rubbish”.

*Over the next three days, Crikey will be profiling the independents who could hold the balance of power if we find ourselves with a hung parliament.

Bob Brown and his slugs will KILL Australia. Their single issue theme is damaging.

They are a dangerous party, will kill off farming, fishing, mining all of which create jobs and ensure all Australian have a quality of life.

The people in mining, spend their money and this adds value across the economy.

Actually the Greens want to save farming and fishing and small business which employs 6 million people.

This outside the square.

The mining tax will cancel projects, that will mean less corporate tax and less employees (personal tax), and knock on through the economy.

The Greens want to stop fishing and tell farmers how to use their land (ie not stop pests, vermin, weeds etc).

You can have high employment and a strong economy that does not rely on degrading the planet. It is bad economics to destroy the things we rely on.

The Greens don’t want to stop fishing and farming – they advocate for doing it sustainably. Don’t you unnderstand the concept that if we outfish our waters, it will ruin the entire fishing industry?

They also don’t want to hurt miners- there will be more jobs available if we actually had proper investment in largescale renewable energy projects.

Yeah, heaven forbid someone stand up for sustainable fishing, eh? Never mind telling Marilyn to this (sic) outside the square, try looking outside your own little box.