Tony Abbott sneaks ahead in the coverage stakes

The coverage in the week leading into the last moments of the campaign has been so equitable that Tony Abbott has actually snuck fractionally ahead.

The coverage in the week leading into the last moments of the campaign has been so equitable that Tony Abbott has actually snuck fractionally ahead. A sign? Probably not, but nevertheless interesting that the broadcast media throughout the campaign have given Abbott a stronger run than press and the internet.

Stephen Conroy moves into the top ten as the Government continued its focus on the national broadband network, while the Opposition tried a few different spokespeople on the issue, starting with the official one Tony Smith, then quickly moving through Paul Fletcher to Malcolm Turnbull, the designated tech-heads.

Anthony Albanese leapt up the list on the only large infrastructure announcement of the campaign, the long-delayed Epping to Parramatta rail link and George Brandis also managed to get himself in a little trouble on the NBN. Its a tech thing George, not a lawyery thing. 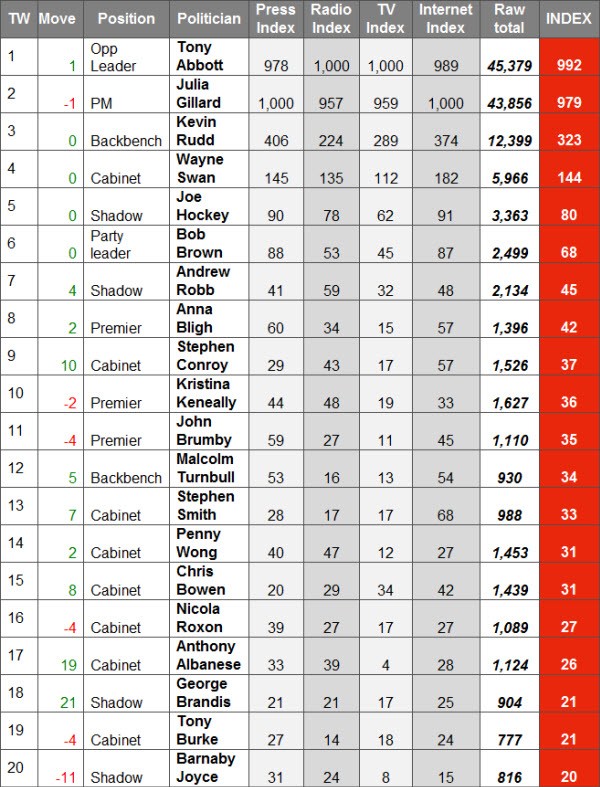 Its neck and neck in volume on talkback too, the favourability continuing to improve slightly for both leaders and even a little more policy focus!

At last some important news … how is everything going Katy? Love your new alternative stuff … and just in case you were wondering, yes 80% of those mentions were on telly.