Is Fosters’ new brew a fizzer?

Australia’s most expensive beer has been sent to the laboratory for testing after fears that the brew may be contaminated with undesirable qualities.

Australia’s most expensive beer has been sent to the laboratory for testing after fears that the luxury brew may contain unwanted qualities.

Crown Ambassador Reserve, released by Foster’s earlier this month to much fanfare and hype, costs $90 a bottle and is designed to be cellared for up to 10 years. With just 7000 bottles of the super-premium beer on the market and the Queen earmarked for bottle ‘0001’, it is part of a marketing strategy to increase interest in Foster’s premium Crown range. 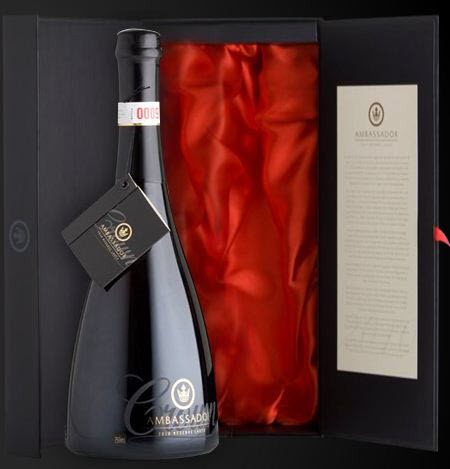 But John Cozens, head brewer at Carlton & United Breweries, has had to send the latest vintage to be tested by microbiologists after an esteemed reviewer wrote that he thought the beer contained brettanomyces — a wild yeast character that produces a sour taste and smell.

Willie Simpson, a noted beer writer, triggered the investigation a week ago when he wrote in Epicure that the beer contained an “unwanted presence” and that he would “send it straight back” had he ordered it at restaurant. 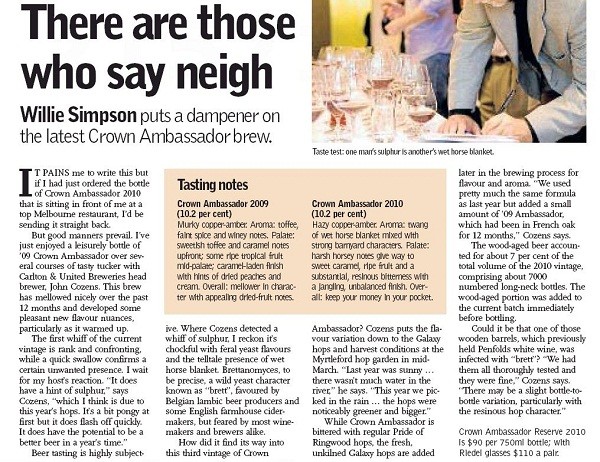 “I reckon it’s chockful with feral yeast flavours and the tell-tale presence of wet horse blanket,” he wrote. “Brettanomyces to be precise, favoured by Belgian lambic beer producers and some English farmhouse cidermakers, but feared by most winemakers and brewers alike.”

Simpson theorised that blending beer from the popular 2009 edition with the current vintage could have been the culprit.

In a response to Simpsons’ review, John Cozens said that his team was “immediately taking steps” to investigate the presence of brettanomyces in the beer.

Stuart Gregor, a spokesperson for Foster’s, told Crikey that results from the tests would be known sometime this week, as well as noting that all tests conducted to date had shown up no traces of the yeast character.

“There has been a suggestion from one beer writer (out of around 30 who received a sample bottle) that there might be a yeast character known as brettanomyces present in the beer,” Gregor told Crikey.

But James Smith, a beer writer at Crafty Pint who also contributes to Epicure, agreed with Simpson’s poor review, writing on his blog that brettanomyces “certainly appeared to be present” in the bottle he tried.

“We came from the approach thinking maybe Willie got a bad bottle,” Smith told Crikey. “But after tasting it we can see where he’s coming from. There is a familiar taste from the Belgian lambics or the sour beers (which intentionally include brettanomyces), which might not have been intended to be there.”

Despite any possible presence of unwanted qualities, Gregor told Crikey that the ale was selling “incredibly well” and that most reviews for the beer had been “enormously positive”.

“The beer has been incredibly well received by nearly all of Australia’s most experienced beer writers,” he told Crikey. “But we certainly recommend people cellar it for at least a year.”

But James Smith wasn’t sure whether ageing would make a difference if brettanomyces are found to be present in the beer.

“The beer will, no doubt, mellow and change over time,” he wrote on Crafty Pint. “But there’s something in there that shouldn’t be and that isn’t likely to disappear. Still, with a bottle tucked away until next year, it’ll get a second chance.”

Try an ale that will keep you awake

$90.00 A bottle eh? I suspect there’s a *tiny* bit of wankery that’s about to come crashing down around the ears of a few “marketing” geniuses at Fosters.
I think they should re-badge it and call it “Schadenfreude.” 🙂

And now we know why. Backpassage myces – a rogue yeast infection. A c**t of a thing to catch.

Now W. Simpson is an excellent judge and a great contributor the Australian beer scene, he has done a huge amount to raise the profile of beer in Australia, but I really find it difficult to agree that Brettanomyces (roughly translated “British Yeast”) would be the problem. Brett comes in a number of strains, the oddly named B.Anomolous, B. Claussenii, B.Bruxenellis and B.Lambicus spring to mind and is an important part of the character of some wines from the Rhone and the old fashioned Hunter Reds.
It was was first isolated from British “Stock” or “Old” Ale and tends to live in oak casks. It is an important, though by no means major component in Belgian Sour Reds and Browns, Lambics and even the revered Orval, where, by the way, I believe it works best as it it is an aroma component and a flavour component rather than an overpowering component. Certainly when left to extreme Brett will produce a sourness but in Lambics and other sours this is generally the result of other infections notably acetobacter and lactobacter. Pure Brett tends to my nose (and I have done pure Brett beers) produces more a fruity tingle than a sour tingle, Brett. Anomalous is remarkably pineapple like early on, B.Bruxenellis is said by by some to be sour cherry like.
Brett, in all its strains, will convert sugars that Sacchoromyces (standard beer yeast species) will not, thus resulting in a very dry and over time a very overcrabonated beer if it has been bottled early.
I have not tasted the Ambassador and its unlikely that I will, none the less I look foward to tests.