Call me old-fashioned but I'm continuing with my commitment to try and put all opinion polls out of my mind as I make my guess about what is happening in the electorates of Australia.

All this whiz-bang business of robo telephone calls soliciting voting intentions from 28,000 people, as reported by the Fairfax press this morning, has left me reeling.

I have not the faintest, foggiest clue as to whether the pollster involved is using a methodology that has a chance of producing an accurate result. I am confident that the Fairfax journalists who have breathlessly reported the findings have no idea either.

Call me old-fashioned but I’m continuing with my commitment to try and put all opinion polls out of my mind as I make my guess about what is happening in the electorates of Australia.

The only external guide I take the slightest notice of is the information from the Crikey Election Indicator that measures the opinions of all the participants in a market on the outcome. My leaning towards the market rather than the polls is because experience has shown it to be a slightly better guide as this analysis of the Iowa Electronic Markets run by the business school of the University of Iowa illustrates: 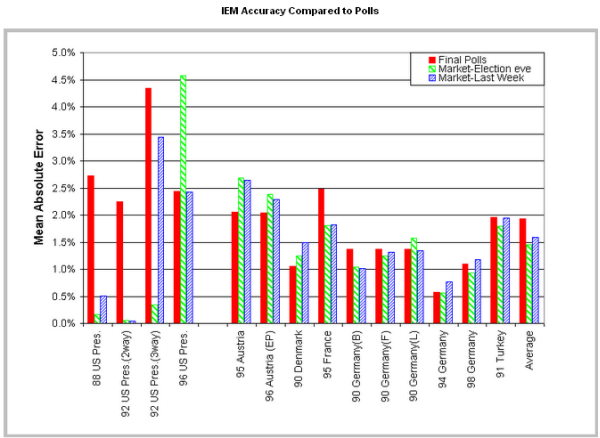 Most important to me is an analysis of the conditions of the country. I thought American political scientist John Sides put it rather well in a recent post to the The Monkey Cage website (a site with the wonderful H.L.Mencken quote as its inspiration — Democracy is the art of running the circus from the monkey cage):

First, elections writ large depend more on performance than on policy — that is, they depend more on how things are going (for which the incumbent party is on the hook) than on specific policies, bills, legislation, etc. Second, although Republicans have said no to a lot of policies and bills, whether you think that’s a problem depends on whether you think saying no was the right thing to do. And how do you know what’s the right thing? It’s largely by taking cues from the party you already identify with.

So it’s not that people formulate views on policy, evaluate the parties in terms of whether they have a plan or the right plan, and then vote for the “best” party. It’s that people don’t always know a lot about policy, and depend on their party’s leaders for the answer. …

This makes it difficult for Democrats to win by portraying the Republicans as having no ideas or having bad ideas. The people who will agree with that are the people already likely to vote Democratic.

Now I have noted the apprehension that Labor Party election strategists have about what is going to happen on Saturday. If they were confident there would not be a joint television appearance with Tony Abbott this evening. They would not be giving the Opposition sucker an even break.

What they now need their champion to be aware of as she takes the stage at the Brisbane Broncos club is the last paragraph of that Sides quote.

If any last-minute message is going to have an effect, it is not the negative one about the Coalition having no economic credentials but a positive one about something that Labor alone can bring to the country’s future.

More Bangkok for your polling buck