The view from Herbert… If ALP candidate Tony Mooney wins Herbert it will be a miracle — he is not  necessarily liked by the ALP  branches (many people are upset by the lack of  a pre-selection ballot after the previous disastrous Townsville Council election) and is having trouble manning the polling booths for the election. […]

The view from Herbert… If ALP candidate Tony Mooney wins Herbert it will be a miracle — he is not  necessarily liked by the ALP  branches (many people are upset by the lack of  a pre-selection ballot after the previous disastrous Townsville Council election) and is having trouble manning the polling booths for the election. For similar reasons the Greens won’t preference him (one of only three seats in Queensland not preferenced by the Greens; the other being next door in Dawson and the seat Blair). Many people have concerns about his past political practices, including  the way he has gone about fundraising in the past. His current campaign is also struggling to get financial support from previous backers when he was mayor.

There will be some strange voting with local Green Jenny Stirling on the Green Senate ticket, and expect a higher Green-to-Liberal preference vote for the Reps seat. Further, many people are upset by the removal of Rudd and this will translate into the LNP vote — the state government is also on the nose and smart politicking by the LNP is trying to link the PM being answerable to Premier Anna Bligh. Expect a green handout by ALP workers on election day (back to the future re: Tasmanian Dams election) asking  Green voters to give their  preference to Mooney (and also next door in Dawson for Brunker) but the ALP may not have the footsoldiers to hand out such documents. — a Crikey reader

A gladiatorial contest. The battle is heating up in far north Queensland for a seat in parliament. The Cairns Post had some fun in Photoshop yesterday, picturing maverick independent member for Kennedy Bob Katter (centre) — with a surely unbeatable 16% margin — presiding over the battle for neighbouring Leichhardt between Labor’s Jim Turnour and the LNP’s Warren Entsch. Is it the worst Photoshop work of this election? 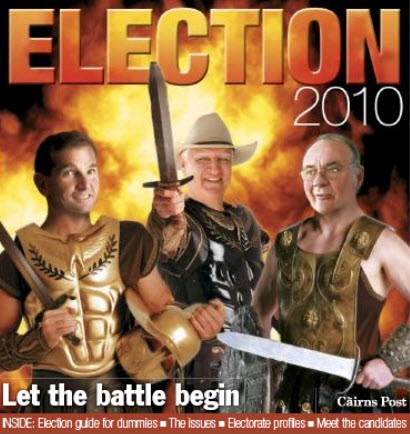 Bob, at least, is not counting his chickens. He’s been campaigning up down his vast electorate, he told Crikey this morning, and anything could happen. Not that we believe him — bet the house, we reckon. — Jason Whittaker

Spinning the routine. Yesterday it was announced that “Rohde and Schwarz Australia has been selected as the preferred supplier for the suite of radio equipment to equip Australia’s Hobart Class Air Warfare Destroyers (AWD).” It’s a routine purchasing decision, albeit one worth $30 million, in an $8 billion project. The spending was already part of the budget.

The AWD program began with the 2000 Defence White Paper. The preferred designers were chosen in 2005. Cabinet’s National Security Committee announced their final decision on the design and the number of ships in June 2007. All under the Howard government. But yesterday’s announcement came from ALP Campaign HQ, with added spin. “The Gillard Labor Government takes its commitment to Australia’s defence and to local industry and jobs very seriously,” Greg Combet said.

“Today’s announcement is welcome news for the North Ryde Technology Corridor which is going from strength to strength,” Maxine McKew said. “Rohde and Schwarz’s contribution to Australia’s Air Warfare Destroyers is expected to create 15 new jobs right here in our community.” That’d be the community of, erm, Bennelong on the Margin? — Stilgherrian

Latham was the future. Check out this from 2004. Remember, he was once the future of the Labor Party. And he was “moving forward”, too. — a Crikey reader 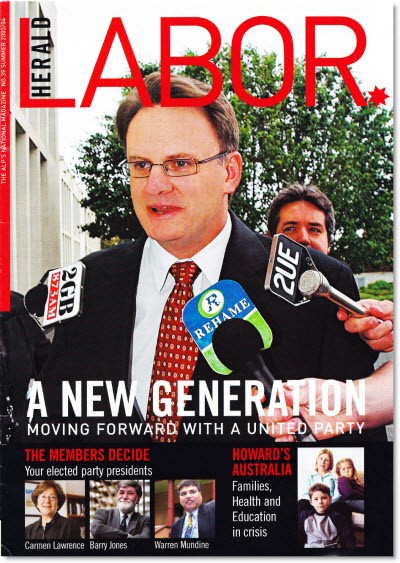 Another view from Herbert is that pro-Gillard voters are pissed off that Labor is forcing them to vote for Mooney. Remember, Mooney has been a high profile public figure in Townsville for over thirty years, nearly twenty of them as mayor – in the later period of which 100% of councillors were Labor which allowed all business to be completed inside Caucus and be simply announced at the public council meetings. There was no public debate. The Shepardson Inquiry into electoral rorting had no real effect. Of course some people like this style of government – witness twenty years of Bjelke Peterson rule.
Mooney was rather dramatically dumped as mayor two years ago and an entirely new council elected after amalgamation. Many Labor voters are completely robotic about their voting behaviour – seemingly unable to fathom how the system works. Most party members are completely beholden to the Party and will not resist at all, even when they are dumped on personally and from a great height by the machine. The National Executive’s intervention to install Mooney as the candidate incensed local branch members but they have lost all capacity for a stoush. They won’t even consider withdrawing their support (ie. going on strike) regardless of the insults they are subjected to.
A real radical move seems to be to make a protest vote for (say) the Greens but to definitely preference Labor second and make sure the Coalition gets last preference. Of course the machine likes it that way, even encourages it and dumb members seem to think they will ‘get away with it”. That’s their protest. Talk about dogs returning to their vomit.