Who won the news cycle? A victory for a dull and boring speech

Sure Julia Gillard had a winning campaigning day but what a dull and boring address to the nation!

There’s one thing Julia Gillard will never be and that’s an orator if her policy speech yesterday is anything to go by. What a dull and boring address to the nation. Yes we will. Yes we will. Yes we will. What a pathetic catch cry. How poorly spoken. For God’s sake, if you continue as Prime Minister, get a speech writer. And soon!

Sure she had a winning campaigning day. Political leaders invariably do when they deliver a policy speech. They dominate the television news irrespective of what they say. But there was nothing in the speech to inspire. Just proof that the new Prime Minister can be just as dull and uninspiring as her Labor predecessor and her would-be Coalition replacement. Would people sit through and listen in to a debate between Gillard and Abbott? Surely the answer is “No we won’t”.

At the time of writing this piece it was not clear if we are to be subjected to one, two or none before the election on Saturday. I know that I’m going to find the National Press Club addresses by the leaders more than enough to satisfy me. 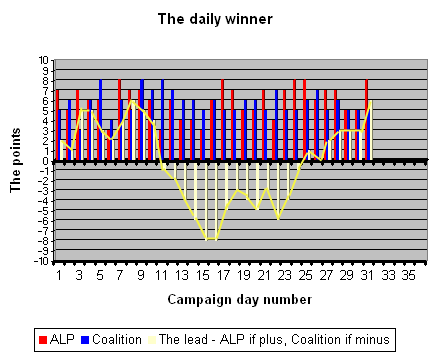 Whatever happens in these final few days it’s certain that neither side will have been a clear cut campaign winner. The Coalition started slowly, had some good middle weeks then Labor finally found some discipline to perhaps nudge ahead. This is in marked contrast to the campaign of 2007 which Labor under Kevin Rudd won comprehensively at every stage.

The uncertainty about the overall impact of the campaign  is reflected in the Crikey Election Indicator. Labor are not yet back to the level where they began these formal proceedings. The probability of the Government being returned is rated as a 75% chance which is another way of saying that the market thinks that once in every four elections in circumstances like these that the Government would get beaten. 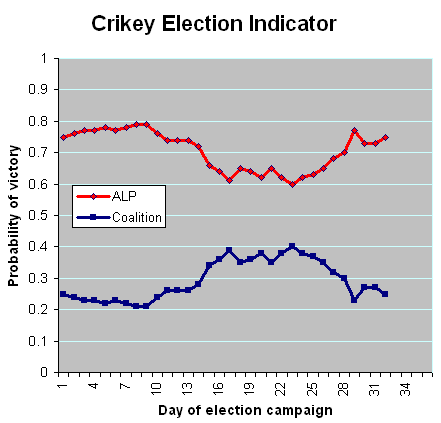 Julia Gillard had not one, but two speech writers for the launch speech. Whether she used any of their material is another matter…

I think Julia’s new catchcry was obviously aimed at shoring up support in South Australia — Yes we wiw.

How many of you media people are any good as orators? Would you give those boring news (kerry O’Brien) sports commentators or sam newman any credibility for saying anything anyone wants to hear?
Get real
Julia may have had notes but so what!!
She spoke with conviction which is more than Abbott did as he weasled his way at Rooty Hill–and it was absolutely yuckey the way he pored the arm of Tony Jones on Q&A when he didn’t want to acknowledge he didn’t like Gays.