Online readers tune out of election

The big voting day gets closer and the interest seems to get even less.

Not even at the Oz. The big voting day gets closer and the interest seems to get even less. My midday survey of the internet news sites shows that not even at The Australian did politics provide the most read yarn.

Some stock market losses by the ACCC chief captured the interest of the normally politically aware set with the retirement of Ben Cousins from football leading the way in many other places.

And, dare I point it out, Crikey’s own most read list is still headed by “Here come the towelheads” a story which Bernard Keane wrote three months ago!

A bit of biffo but no real passion. I know there’s been a bit of biffo in a couple of electorates and some eggs thrown yesterday at a candidate’s car that provoked some minor child abuse but if this campaign is notable for anything it is a lack of real passion. In a perverse kind of way it is this apparent lack of interest that makes the campaign of 2010 such a fascinating one to diehard election watchers like me. I can’t remember any election like it when so few people really care about the outcome that it is difficult to predict the outcome.

Getting closer in Bennelong. When Kevin Rudd was called down to give his protege Maxine McKew a hand in her seat of Bennelong it was a clear sign that Labor thought things were getting close. Now I notice that the bookmakers have got the contest close to even money take your pick. Will John Alexander provide John Howard with some belated revenge?

Getting closer to a trade war? China it seems has made it to number two in the world economic rankings according to the latest figures from Japan and China. 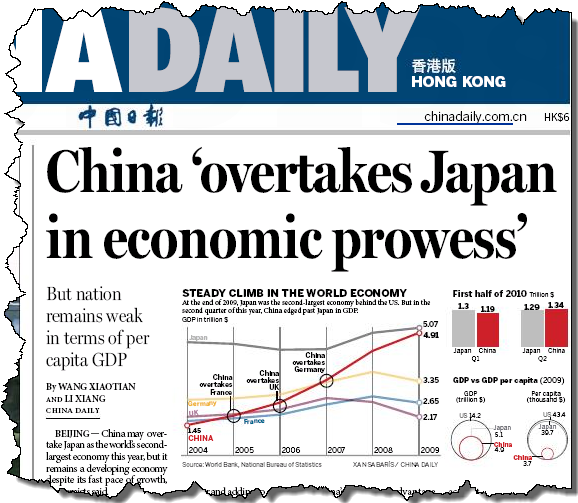 In the United States, meanwhile, there is continuing criticism of the Chinese exchange rate policy with Nobel prize winner Paul Krugman going so far this morning as to suggest that an old fashioned trade war might be no bad thing.

Right now, China is following a policy that is, in effect, one of imposing high tariffs and providing large export subsidies — because that’s what an undervalued currency does. That should be a violation of trade rules; it might in fact be a violation, but the language of the law is vague on the subject. But leave aside the fine print of the law for a moment: what China is doing amounts to a seriously predatory trade policy, the kind of thing that is supposed to be prevented by the threat of sanctions.

Yet the Chinese have taken our measure, and decided that we won’t act. Until or unless that changes, we’re just whistling in the wind.

I say confront the issue head on — and if it leads to trade conflict, bear in mind that in a depressed world economy, surplus countries have a lot to lose from such a conflict, while deficit countries may well end up gaining. Or to put it differently, right now we’re in a world in which mercantilism works. In the long run we’ll emerge from this kind of world; but in the long run …

Avoiding election withdrawal symptoms. For those liable to suffer withdrawal symptoms when the Australian election is over, never fear. The United States has one on the way and big changes are being predicted for both the House of Representatives and the Senate.

I normally respect Krugman, but has he lost his marbles?

“I say confront the issue head on — and if it leads to trade conflict, bear in mind that in a depressed world economy, surplus countries have a lot to lose from such a conflict, while deficit countries may well end up gaining.”

Great – the US should start a protectionist trade war in the middle of an international financial crisis. Just like they did in the early ’30s, which led to a chain reaction of similar trade barriers being erected in response around the world, an implosion of world trade and a financial crisis turning into the Great Depression.

As for surplus countries having a lot to lose, indeed in the 1930s up-and-coming economic power Japan was the big loser. Result was collapse of civilian government, a military junta and a decision that if they couldn’t win in the market place they’d win militarily. Result later on was World War 2 in the Pacific.

Does Krugman realise that if the US shuts out China, its largest supplier, even without triggering an international trade war China may come to the conclusion that if its rise to international power by economic means is to be stopped it might decide military means are preferable?