Keep the kids out of it

It's one thing for a gossip rag to roll around in this stuff about Tim Mathieson's daughter. It's another thing for the nation's highest selling newspaper to concoct a story around it.

“Woman’s Day can reveal Staci, one of the most talked about and sought after stylists in New York, is the secret love child Tim fathered in his teens.” 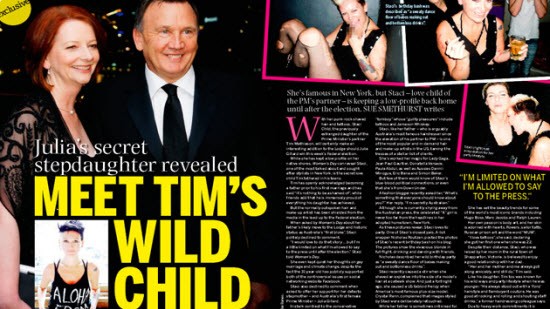 Throw to the Herald Sun yesterday:

“When asked for her opinions on the election Ms Child reportedly said she couldn’t speak. “I’m a little limited on what I’m allowed to say,” she said.

That line “I’m a little limited on what I’m allowed to say” seems to be the only thing Gillard’s wild secret estranged make-up artist step love child has said to the media. It’s repeated three times in the Herald Sun piece. Meanwhile, The Daily Telegraph is busy knocking down her door in New York.

Now throw to this MySpace interview with Prime Minister Gillard, to be posted online this evening:

“I feel a moderate connection to her because Tim’s daughter has work doing some hair and makeup for her,” she said.

Not so secret, then.

We’ll end with a more rational voice: Paul Keating. Someone who knows a little something about daughters being harassed spoke about privacy in a speech at Melbourne University earlier this month:

“Instead of standing aggressively behind the status quo, dressed in the cloak of the Fourth Estate, they need to talk more about responsibility, more about the importance of ethics, more about improvement in the standards of journalism in all respects.”

It’s one thing for a gossip rag to roll around in this stuff. It’s another thing for the nation’s highest-selling newspaper to concoct a story around it.

Good grief, this is the icing on the cow pat (otherwise known as the Oz press).

What a scandal eh?
This obviously needs more exposure.
Something is needed boost the sacred circulation figures.
Roll on Sunday PLEASE!!!!

What an idiotic (but perhaps expected) thing for a magazine to write! Who cares if she is Tim’s daughter? The sad thing is that the PAPERS are publishing it too – and calling Staci Gillard’s stepdaughter!

She is NOT Gillard’s step daughter – the PM and Tim aren’t married. What kind of low-quality journalist can’t even get this most basic of facts correct? – which is surprising really, because it was just two weeks ago that they were deriding her for not being married. Idiots.

It’s been written already that Tim has children. So what? Who cares what his daughter is doing? She has a career and life of her own, so the press should just leave her alone.