Who won the news cycle? No weekend campaign winner

There are still very few signs that federal election fever is spreading through the nation.

There are still very few signs that federal election fever is spreading through the nation. The most read lists continue to feature sex, murder and mayhem as the principal public interests although tabloid television did have a political slant last night. Kevin Rudd will have done his party no harm with his Channel Seven interview and might have helped the cause of organ donations.

Over on Nine Mark Latham lacked the biting sharpness he brings so often to his newspaper columns but that was probably more the fault of the medium than his own skills. Making serious points about the weaknesses of our system of democracy would be hard to get across in 60 minutes and proved impossible in the six or so allocated. Hence there was really nothing more to the much awaited Latham report than the suggestion that we wish a pox upon all their houses and simply vote informal with a blank ballot paper.

All in all it was another of those weekends that prove it’s hard for a politician to compete with the footy but the champion teams Collingwood and Geelong both having great victories probably means the feeling of contentment will continue in Victoria and ensure that the incumbent’s advantage continues in Victoria. Nothing as helpful north of the border in New South Wales where those Westies will be lamenting Penrith falling in a rugby league hole. That’s enough for me to declare Saturday a nil all draw in the campaign stakes. 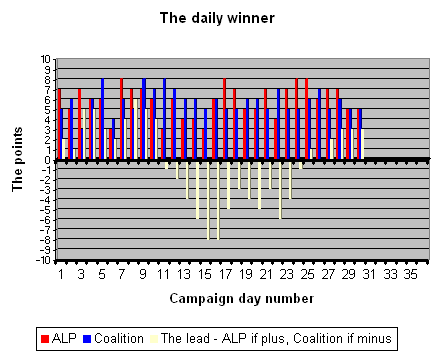 On the Crikey Indicator front the overall movement was slightly in Labor’s favour. 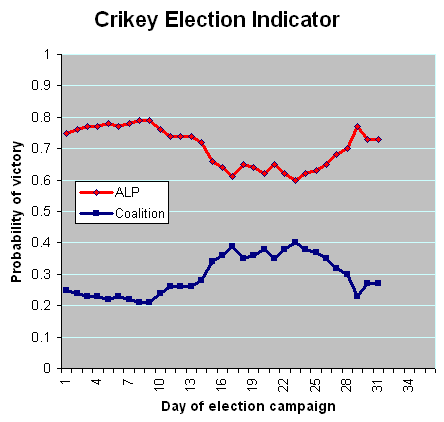