Labor goes the Greens? Looks like the ALP is about to open a new front — www.areyouvotinggreen.com. The website doesn’t work yet, it just asks for a password with the message “ALP Stage Area”. It traces back to the ALP. Pyne spending to hang on. Christopher Pyne has been spending up big on his election […]

Labor goes the Greens? Looks like the ALP is about to open a new front — www.areyouvotinggreen.com. The website doesn’t work yet, it just asks for a password with the message “ALP Stage Area”. It traces back to the ALP.

Pyne spending to hang on. Christopher Pyne has been spending up big on his election campaign as he aims to shore up his marginal South Australian seat of Sturt. Labor candidate Rick Sarre has been putting pressure on Pyne as he has a lot of experience outside politics and a high profile locally as a law professor. Pyne has been going around to local groups such as Landcare and offering them hundreds of thousands of dollars in grants if the Liberals are elected, but without any credit going to the current popular, hard-working mayor Simon Brewer. These offers from Pyne have not been put into any literature or announcement.

J-Gil from the block. This Julia Gillard satire T-shirt may give you a giggle … 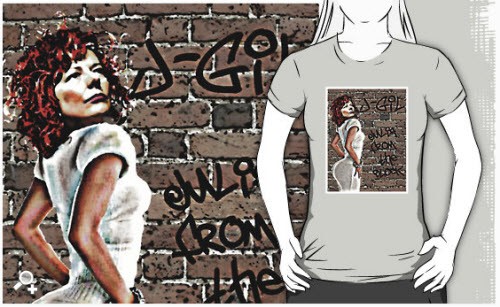 Store wars — size matters. The grand opening of David Jones’ new Bourke Street store in Melbourne last week has started another department store war, but this one involves tape measures rather than frocks. DJ bosses will only say their new Bourke St fashion palace is 30% larger, while their neighbours next door have fessed up that the new Myer Melbourne will be about 34,000 square metres. The old Myer Melbourne will shrink from roughly 50,000 sq/m across Bourke and Lonsdale streets to the new compact size when the Lonsdale Street store closes and the store is consolidated into the rebuilt Bourke St store later this year or early next year. That will make Myer Melbourne — once the largest department stores in Australia and one of the largest (in its heyday) in the world — smaller than DJs in Sydney, possibly smaller than Myer in Sydney and probably smaller or on par with DJs next door.

Insurers party on Sydney Harbour … Asteron, a Suncorp company, recently took a large number of its staff on a three-day cruise around Sydney Harbour. This follows on from previous functions in the Hunter Valley and NSW north coast in previous years. Independent financial advisers will soon be attending an “Educational Conference”; last year’s was held at Sanctuary Cove and Suncorp Stadium, which concluded with a black-tie dinner and after-party. With Suncorp being affected by large claims in the previous 12 months, and under pressure to increase interest rates, is it appropriate Asteron be squandering money on entertainment?

… and on the Sunshine Coast. From October 23-27, ALUCA (Australian Life Underwriting Claims Association) will be holding a conference at the Novetel resort in Maroochydore.  The bulk of participants would have had their registration fee paid by their employers — MLC, Comminsure, AXA, Asteron, Aviva, NAB, etc. While the guise of this is for education purposes, a bulk of the time and registration costs go to providing booze-ups. I am not against education, but is it right shareholders money is used to entertain the staff on what almost becomes a holiday for some? The people attending are those who decide if you get life insurance, and if you get your claim admitted.

Turnbull picks up the phone