Our Election Tipping Contest: it’s not too late to pick the winners!

I expect to find the eventual winner from among the early entries rather than from among you laggards! But come on. Try and prove me wrong.

Now I know that many astute Crikey readers have delayed putting in their entry for the $5000 to the winner Crikey election tipping contest in the belief that being armed with the very latest opinion polls will increase the chance of winning. Well good luck to you all but I found the weekend selection of polls taken in marginal electorates nothing more than frightfully confusing.

I’m happy enough to stick with my original selections made at the very beginning of the campaign and expect to find the eventual winner from among the early entries rather than from among you laggards! But come on. Try and prove me wrong.

Entry is free for all Crikey subscribers and there’s a great array of prizes for whoever turns out to be the nation’s top election tipster.

So far the analysis by Crikey tipsters of what will happen in the 20 marginal seats chosen for the contest looks like this: 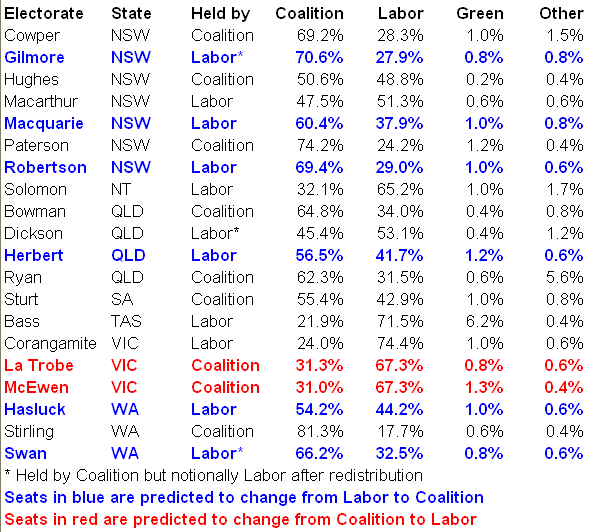 Six seats actually or notionally Labor at the moment are expected to be won by the Coalition with two seats predicted to go the other way from the Coalition to Labor.

Herbert is already Liberal held by the retiring Peter Lindsay.