39,421km. That's how much jet fuel Julia Gillard and her entourage have burned through during this election campaign on the way to Labor's belated campaign launch in Brisbane today.

39,421km. That’s how much jet fuel Julia Gillard and her entourage have burned through during this election campaign on the way to Labor’s belated campaign launch in Brisbane today.

All of it — the flights, the hotel rooms, the whole travelling circus — paid for by you. 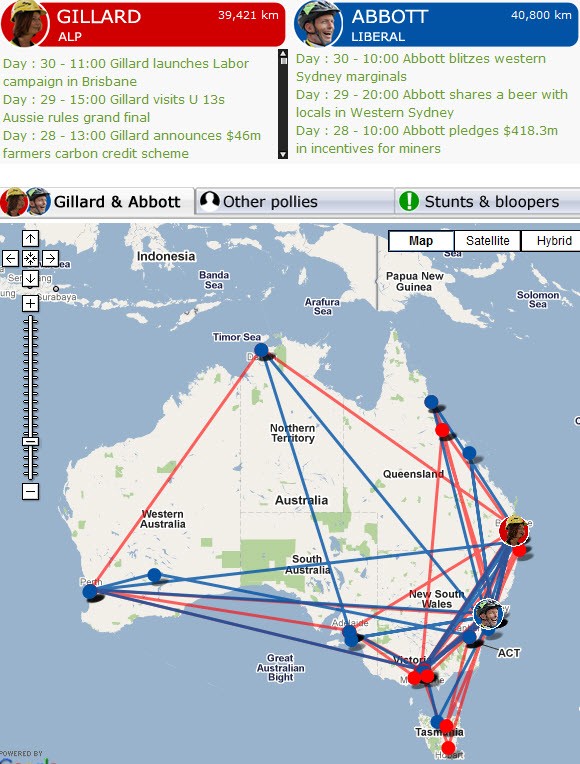 At least Tony Abbott had only racked up a more modest 31,048km worth of frequent flyer points ahead of the Liberal Party launch last Sunday, as calculated by Crikey‘s election tracker — before you stopped paying for his campaign.

You see, political parties can campaign on the public purse before their campaigns officially kick off. It’s a regulatory quirk of election campaigning both sides are only too keen to exploit. Labor’s decision to delay its launch until just five days out from polling day is especially derisive.

Some 70,469km of taxpayer-funded travel rorts. And nobody in Canberra says boo.

Less than one week to go and it’s anyone’s game.

Stay informed with our bonus early morning election email, the Crikey Tracker (and Twacker), plus blogs Pollytics, Poll Bludger, The Stump and First Blog on the Moon.

Delight in the mediocrity of it all with Shane Maloney’s Marginalia, then put your money where your mouth is and get punting at our Election Tipping Comp, but not before doing your research on Poll Bludger’s Electorate Form Guide.

Look back fondly upon every day of this momentous battle with the Interpretive Dance Bandicoot, relive the incisive analysis of Bernard Keane and Richard Farmer and re-read Guy Rundle’s essay on the impasse of Australian politics and society.

For the policy wonks, there’s Policy Watch and for all your campaign fluff, there’s Leftovers. It’s all pulled together on our Campaign Crikey page. This could be the closest race in years, so we suggest you sit up and pay attention.

How come this is a RORT in this election, but in other elections it was not a RORT and considered important for
the politicians to get out once every 3 years and check out what the voters want??

No wonder we are getting tired of the Press it continually nitpick and becomes hysterical about events which in the
past have been considered as necessary. Please Crikey don’t you too go the way of the print media we are relying on you to give factual and crucial reporting, not hysterical crap.

Actually I feel quite sorry for both of them having to travel all of those miles in the first place, it must be exhausting.