News Limited papers revealed today that Mark Latham 'broke the law' last night when he urged voters to hand in a blank ballot on election day has been confirmed as false. And other campaign leftovers from the day.

Latham not guilty of AEC breach. News Limited papers revealed today that Mark Latham ‘broke the law’ last night when he urged voters to hand in a blank ballot on election day has been confirmed as false. In a story found on their online news sites, including the Herald Sun, Daily Telegraph and Courier-Mail, it claims that Latham could be charged for “breaching section 329A of the Commonwealth Electoral Act” after his story was aired on 60 Minutes. Perhaps that would have been the case 15 years ago. Section 329A was repealed in 1998 after Albert Langer was found guilty of contempt of court after publicly advocating an informal vote in 1996. — Tom Cowie

Bookie Watch. The weight of money is really starting to come for the Labor party now, with Sportingbet Australia offering $1.28 for a Julia Gillard victory or odds of $3.60 if you think Tony Abbott can bring home the bacon. Meanwhile, the bookies have also opened a market for the next Foreign Minister, with Kevin Rudd currently favourite at $2.00. Barnaby Joyce is the rank outsider at $13.

Speaking of gambling. Crikey‘s election omen bet experiment is proving a little expensive and fails to neither confirm nor deny whether having a punt on the basis of name alone (as it equates to the current federal election) is a worthwhile practice.

I had two little wins on Friday. Red White ‘N’ Blue saluted making me $2.40, as did Dashing Christian which saw me collect $2.90 — both from $1 each way bets. Sadly, Overspend was scratched from the field at Tamworth — which means my initial $8 outlay saw me recover $5.30.

And like the campaign itself, I need an injection of excitement and a big win.

$29.30 down. I saw Bob Hawke on the TV today at the Labor campaign launch. If he can come back from the dead, so can I. — Leigh Josey

Leaflet Watch. I live in the electorate of Adelaide and got the attached in mailbox yesterday. I find a few things quoted in Liberal candidate Luke Westley’s leaflet ‘interesting’: — a Crikey reader

Boaties back Abbott. Here’s some email spam of a different kind. Boatbits, an online marine shop who sell “everything boating”, nailed their colours to the mast when they sent out this piece of propaganda to their email subscribers on Saturday morning: 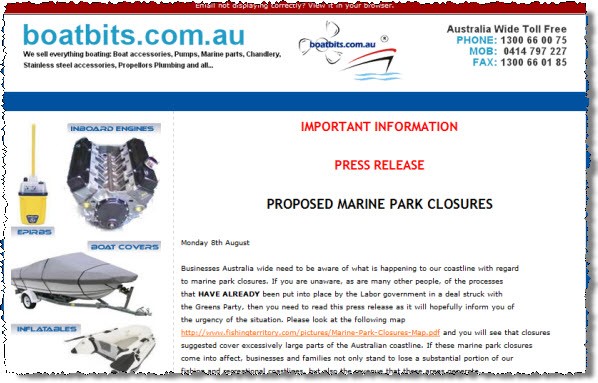 As well as linking to the Coalition marine park policy, the release claims that Labor have “sprung these closures on us just prior to the election, giving businesses very little time to gain a full understanding of the far reaching ramifications that this proposal will have on industry across Australia.” According to their website, Boatbits is a “family owned” online marine service which has been in operation since 1997.

As one Crikey reader put it — “Using their product mailing list for political advertising is over the top as far as I am concerned. This is the last email from this company.”