There's perhaps one finding we can take from the recent opinion polls -- the Greens appear to be doing substantially better on this occasion than in the lead up to any past federal election.

There’s perhaps one finding we can take from the recent opinion polls — the Greens appear to be doing substantially better on this occasion than in the lead up to any past federal election. This morning’s Newspoll put the Green vote nationally at 14% and since the beginning of May it has hovered round the 13% mark.

Yet while the pollsters keep telling us that the Greens are on course to do substantially better at this election than in the past the pundits keep warning us that the eventual Green vote will be less than what is being predicted. Why that is the accepted wisdom of the media experts I’m not sure.

Looking at what has happened at recent elections seems to suggest, if anything, that the actual Green vote will be higher than the predicted one rather than the reverse.

The opinion poll figure in the above table is the prediction in the second last Newspoll published before election day. In all four cases the actual Green vote was higher than the prediction.

The apparent myth that the Green vote falls away probably has its origins in what has happened in recent Tasmanian state elections where a slight fall did occur but those were quite different circumstances with the major parties both warning of the dangers to democracy of a hung Parliament in Hobart where the Greens had the balance of power. There is no such scaremongering in this federal campaign.

Hence my belief that on Saturday we will see the Greens gaining a 12 to 15% share of the national vote as is being predicted and if that happens there could be a few surprises in store for some Labor Party candidates in supposedly safe seats.

In a comprehensive and thoughtful paper for the Parliamentary Library in Canberra called The Rise of the Australian Greens, researcher Scott Bennett describes how the Green vote varies substantially depending on the type of electorate and the state. At the 2007 House of Representatives election when the Greens nationwide polled 7.8% of the votes, the figure for inner metropolitan seats was 10.8%, 7.6% in provincial seats, 6.5% in outer metropolitan seats and only 6.4% in rural seats. 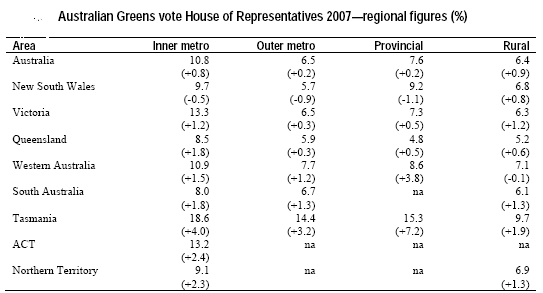 Should this distribution pattern of the Green vote be repeated this Saturday then, taking a mid-point of what the recent polls have predicted nationally, a 13% Green vote would turn into an 18% share of the vote in inner metropolitan seats. 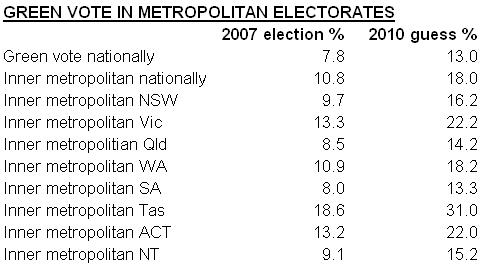 An 18% share of the vote across all inner metropolitan seats is getting close to the level where several seats would see the Greens vote higher than that of the Liberals which is one precondition for a potential Green House of Representatives victory. A second requirement, naturally, is that Labor does not get above the 50% mark so that Liberal preferences have to be distributed.

If we do happen to see a seven or eight percentage point increase in the Green vote, with almost all of it coming from Labor, then it is not only the inner city seat of Melbourne where Labor will be in trouble. Sydney, Denison and perhaps Grayndler would enter the endangered list.

“There is no such scaremongering in this federal campaign.” – yet.
There’s still four days to go and Labor have no shame when it comes to taking Green preferences while quietly running the dirty hippy-latte-drugs-to-your-kids line. If they realise, as Mr Farmer has, that the Greens can really bring the democracy back, expect a lively dose of fear and loathing sometime between thursday morning and when the polls open.
It wont come directly from Gillard, but the rank and file will need a little reminder that a Green vote is not merely a protest.

There’s a reason why Newspoll understated the Greens vote in previous elections: it’s because they didn’t offer people “Greens” as an option, but waited for people to name them under “others”. They’ve now changed their practice, so their Greens estimates have moved into line with other polls.

Considering the fact the loss of every Labor seat (eg Melbourne, Graynder, Sydney) automatically increases the likelihood of an Abbott victory – the prospect of which seems to give Greens spruikers like Mattsui here a little rush of blood to head, you have to ask: In whose interests are the Greens working?

Russell – Australia’s? And that most certainly would not, could not be the answer were your question “in whose interests are the Lib/Lab working?”.
Cui bono? or, more prosaically, follow the money for that answer.