Our whole system of government has come to a pretty pass if the Coalition really does believe that it cannot trust the officials of the Commonwealth Treasury to act with fairness.

Not a matter of if,  but when. Our whole system of government has come to a pretty pass if the Coalition really does believe that it cannot trust the officials of the Commonwealth Treasury to act with fairness and integrity in carrying out their duties to cost election promises. What has upset the shadow Treasurer Joe Hockey and Finance Minister Andrew Robb is a newspaper story alleging that a Treasury analysis of one promised project found a sizeable mistake in the Coalition’s costings. Send in the Federal Police to find the villain responsible for the leak is what the Opposition pair have shouted and until that happens no more proposals will be submitted for costing.

Now there’s no doubt that the leaker involved has acted in a quite disreputable fashion. The frequent defence of the whistleblower is that unauthorised disclosure was necessary so there would be an informed public does not apply in this case as there would have been disclosure when Treasury fulfilled its obligation to report publicly on its costings. All that has happened is that the disclosure has come sooner rather than later. Thus, the suspicion that the real concern of Messrs Hockey and Robb is that they fear their claims of fiscal restraint to  bring down the budget deficit at a quicker pace than Labor would be exposed by this budget honesty process.

Whatever their concern, the consequence of alleging that they do not trust the independence and impartiality of Treasury officials are potentially serious. Are we henceforth to have a wholesale replacement of senior public servants so they can be replaced by loyal toadies? And won’t the consequence of that be that we have more lower level public servants getting in to the leaking business with their conscience being clear because unauthorised disclosure is the only way that the truth will ever get out?

Hung parliament speculation. The hung parliament stories are starting to appear as some opinion polls — but not the latest Morgan version — point to this election being a close-run thing. I have written of my distrust of opinion polls before and I am always amused when a poll such as  this week’s Morgan putting the two-party vote at Labor 57.5% to Coalition 42.5% is dismissed as being rogue for no other apparent reason than it does not suit the writer’s prejudice. I am happily sticking to what the market tells me is happening and that still points to a Labor victory albeit not of the size that Morgan predicts. Somewhere around Labor with 79 seats to 67 for the Coalition with four seats held by others is what the Crikey Election Indicator is suggesting.

The temperature is still rising. The Goddard Institute of Space Studies at the National Aeronautics and Space Administration has now released its analysis of world temperatures for the first seven months of this year showing that the global average July 2010 temperature was 0.55°C warmer than climatology (the long-run average) in the GISS analysis, which puts 2010 in practically a three-way tie for third warmest July. July 1998 was the warmest in the GISS analysis, at 0.68°C.

The July 2010 global map of surface temperature anomalies (figure 1), relative to the average July in the 1951-1980 period, was more than 5°C (about 10°F) warmer than climatology in the eastern European region including Moscow. There was an area in eastern Asia that was similarly unusually hot. The eastern part of the United States was unusually warm, although not to the degree of the hot spots in Eurasia. There were also substantial areas cooler than climatology, including a region in central Asia and the southern part of South America. The emerging La Niña is now moderately strong, as evidenced by the region cooler than climatology along the equator in the eastern and central Pacific Ocean. 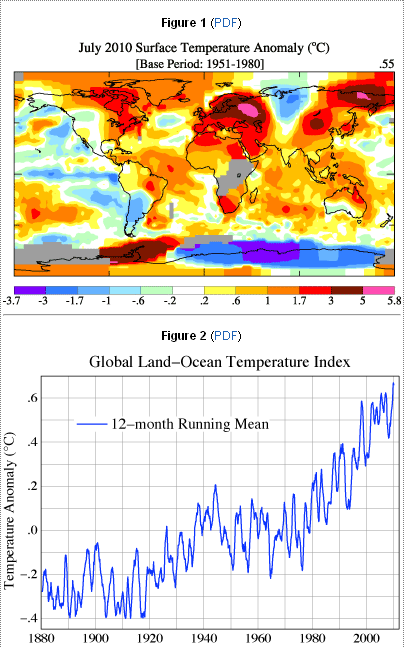 The GISS analysis poses the question of whether calendar year 2010 be the warmest in the period of instrumental data?

Figure 3 shows that through the first seven months 2010 is warmer than prior warm years. The difference of +0.08°C compared with 2005, the prior warmest year, is large enough that 2010 is likely, but not certain, to be the warmest year in the GISS record. However, because of the cooling effect of La Niña in the remainder of the year, there is a strong possibility that the 2005 and 2010 global temperatures will be sufficiently close that they will be practically indistinguishable.

The Intrade prediction market where people put a price on such matters has the probability of 2010 being warmer than prior years at about a 90% probability.

Should the Coalition win government (oy vey) I imagine the working relationship with Treasury will be strained – to put it mildly. If a government feels it cannot trust the public servants then the path leads downhill.

“Whatever their concern, the consequence of alleging that they do not trust the independence and impartiality of Treasury officials are potentially serious.”

Maybe they were thinking of Godwin Grech 🙂