It’s always hard to know how much credence to put in circulation figures, given the way the system works.

Any newspaper that someone pays for — no matter how little they pay — counts towards the results. Thus the deals under which university students, school teachers, gym members, attendees at sporting matches and so on and so forth can get close to free newspapers.

It all boosts the stats, particularly when the newsagents involved get paid full tote odds, and therefore have a vested interest in, for example, signing up the local school teachers.

And that’s even before we get to giveaways and other special deals that give a distorted one-off result.

Nevertheless, newspaper circulation figures are at least audited, and there are limits to the bodginess — unlike readership stats.

So there is no hiding the bad news in the latest figures, released yesterday. Monday to Sunday metropolitan newspaper sales fell by 2.5%. Only The West Australian had any kind of rise — and it would be interesting to speculate on why that might be. 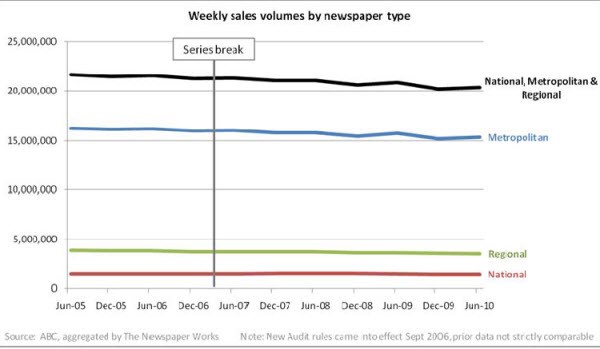 Meanwhile, the biggest loser was News Ltd’s Sunday Mail in Queensland, which dropped nearly 7%. The Australian Financial Review lost almost 6% — having been on a steepish downward trajectory for some time. The Sydney Morning Herald held steady, but The Age lost 4.5%. The Australian had a small fall, effectively also holding steady.

There is no good news, despite the various publishers’ attempts to spin the stats, as though they have never had a bad audit.

One could go nuts trying to figure out the reasons, but as previously stated, the various giveaways and circulation deals mean that the navel gazing rarely leads to much enlightenment.

And the real story — total newspaper circulation plotted against population growth over time — tells a much grimmer story. Daily newspaper readership is a sharply declining habit.

The newspaper proprietors assert, not entirely without justification, that what they care about these days is readership, including online readership, which is generally growing. But that doesn’t deal with the fact that the business model still largely relies on the print product, and its “premium” position.

Meanwhile, magazines, which a few years ago seemed to be holding up while their less glossy cousins declined, are also in trouble. TV Week is heading south, losing more than 11%. OK lost 15% and Zoo also lost heavily. Celeb pics and breasty birds seem to be losing their appeal faster than news — a reverse of the trends predicted a decade ago.

Perhaps Crikey could publish its own ‘circulation’ figures as well?

Charle, might be a bit of an eye opener…

Margaret, if a newspaper is in someone’s hands and they read, it whether they paid a $1.10 or got it with their entrance to the SCG, or Etihad or with their Macca’s really that important? It’s readers that translate into ad revenue, as it is viewers on TV…

why do you want to talk up the death of newspapers, I don’t get it…

The fact that newspapers are dying is old news. Regular advertisers are departing in droves because regular readers are doing likewise.

Margaret is hardly “talking it up”; she’s merely reporting on the continuing trend.

I don’t entirely buy the ‘blame the reader’ logic. I haven’t unsubscribed, and I have no intention of, and I don’t believe anyone in my delivery area is panting for an iPad app to replace the paper over weetbix.

2% decline is tiny. I’d say on this evidence subscription is holding up, the trend is longterm and unlikely to be reactive to short-term technology changes, and that its price-inelastic.

OTOH, since we no longer have amateurs capable of “speeding through the plashy fen goes the questing vole” standards of writing, or even Philip Knightley, I’m not entirely sure WHY I still subscribe.

the man on the clapham omnibus

A lack of quality in certain publications certainly makes me as a reader less likely to purchase a newspaper today. There are times whenever where folding out a broadsheet over breakfast or a coffee retains it’s appeal.

There is also a greater variety available online and this might be a reflection of greater competition globally in the media space.

By going online I can read BBC, CNN, Huffington Post, the Economist, Wired to name but a few of the options out there.

Compare this with the tripe and lazy journalism on offer on a typical Sunday publication that seems more interested in scandal and generating online hits than reporting insightful articles to the public.