The young are struggling for jobs

Youth unemployment -- those aged 15-19 and wanting to be in the workforce -- has reached its highest level in nearly a decade.

Youths pay the price. Youth unemployment — those aged 15-19 and wanting to be in the workforce  — has reached its highest level in nearly a decade. Australian Bureau of Statistics figures for July released this morning put the seasonally adjusted rate at 18%. It was last above this level back in 2001. The July figure  is up from a low point of 11.5% in August 2008. That’s an extra 53,700 young people without a job.

Overall, the figures show that economic growth is barely sufficient to find jobs for those entering the labour market, with unemployment rising in July to 5.3% after a 0.2% increase in the participation rate. 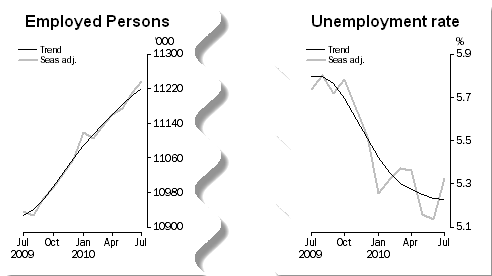 Crossing a delicate line. An independent Reserve Bank is something of an anomaly in a democracy where an unelected group or people get to make major decisions that have an effect on all of us. For one thing, when the board makes a mistake and the economy suffers, it is not its members who get punished but the government, which has granted it an independent role in monetary policy. It is a delicate balancing act for  government and bank and that the system generally works without public tension reflects well on the political sensitivity of those involved.

Part of that sensitivity has to be each party carefully choosing the words it uses about the other. Too much public controversy and politicians will eventually insist that if they are going to get the blame they might as well be responsible for the decisions.

It seems to me that Reserve Bank board member Warwick McKibbin is now getting close to going too far in his criticisms of the Labor government over the benefits of its stimulus package. He has become quite a major player in the economic debate in a way that can be seen as party political. If the professor wants to play this game of a partisan participant,  he should stick to being an ANU professor and forget about being a Reserve Bank board member.

Election far from top of the public mind. As a long-time print journalist, I found it quite depressing the first time I sat behind the one-way glass and watched a skilled researcher tease out of people their opinions (or quite often their lack of them) about politics and where they gained their information. Rare it was to find a swinging voter who was influenced by anything they read in a newspaper. A quick glance at a headline anything to do with politics and the page was turned pronto. And as for party political advertisements, they were an absolute no-no paid no attention at all.

I am not really surprised then to find that stories about who has promised what to whom in a day of election campaigning rarely feature in the list of most-read items on newspaper websites. The great majority of Australians have other things on their mind that are of far more interest to them. Stories such as these that were top of the lists at midnight last night:

It’s just a little something we should keep in mind as we try and evaluate the impact of the daily political events on voting intentions.

It was yes or no at the Tele. An intriguing variation on those website instant polls in the Sydney Daily Telegraph after last night’s very interesting Rooty Hill RSL appearances by the Prime Minister and the Opposition leader. 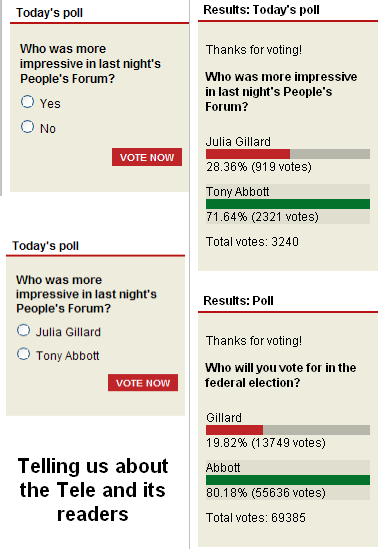 Eventually someone twigged that asking people to vote for a Yes or a No was not going to be very revealing and the names of the leaders was substituted. That Tony Abbott emerged the popular choice comes s no surprise when you look at the result for the paper’s other poll of readers opinion asking visitors who they intend to vote for.

I’d have to agree with about Warwick McKibbin’s comments Richard.
My first thought when I read them (somewhere ) was that he was angling for a promotion if the Opposition should win.
But then I thought, that’s way too cynical on my part.
Whatever the reason, I’m glad it’s not just me who thought he’s gone over the line.

Hmm, a quick reset of the appropriate cookie, and I can vote again…

I fully concur with the comments on McKibbin in his position he as no right to be partisan in any way. He should follow the lead set by the Reserve Bank Governor and make “no comment” his standard reply. It completely and utterly wrecks the few of the Reserve Bank been an independent and neutral umpire in carrying out its charter.

You guys are amazing! When the likes of Garnaut, Eddington, Henry etc publish their views they are respected experts. When someone like McKibbin does the same he gets labelled as “party political.”

Talk about having cake and eating it! Amazing!!

You have entirely missed the point, which is one of probity. Look up the word – you clearly need ethical assistance.

McKibbin was out of line not for what he said or his qualifications, but because as a member of the RBA Board, he knows better than to spout publicly on this subject.