In the battle of the 24 hour news channels, ABC News 24 and Sky News are constantly warring for exclusives and being first with the story. Plus, no disclosure for Dr Henry Ergas and other media news of the day.

ABC News 24 gets mad, then even. In the battle of the 24-hour news channels, ABC News 24 and Sky News are constantly warring for exclusives and being first with the story. Last night’s Rooty Hill forum — a joint Daily Telegraph/Sky News event — with Tony Abbott and Julia Gillard was a classic example, since Sky News refused to give ABC News 24 access to the feed and only offering a highlights package.

Earlier this week the ABC News 24 released an angry press release, claiming that since its gives out a feed to Press Club debates, Sky News should offer them one for the Rooty Hill forum:

“…the event will not be shown live on ABC NEWS 24, the ABC’s new continuous news channel, or streamed on radio or online because it is being withheld by the organisers of the event – Sky News and The Daily Telegraph. This is in stark contrast to every other major appearance involving the two leaders and the major policy debates at the National Press Club, which have all been produced by the ABC and made available live and as a “clean feed” to all other networks, including Sky.

Caroline Overington wrote a snitchy little blog post over at The Oz about why it was totally fair for Sky News not to give a live feed to ABC News 24 (while also declaring that Sky News did not own The Australian, totally separate, jeez why does everyone keep talking about that, they are different companies okay…):

“…The People’s Forum is a live TV show, in the same way as the ABC’s Q&A, starring Julia Gillard on Monday night, was a live TV show. Sky didn’t ask for the live Q&A feed, to show live on Sky. Sky won’t ask for next week’s Q&A, featuring Tony Abbott. The ABC News 24 therefore can’t expect Sky to hand over a feed from the forum.”

ABC Director Mark Scott made a bitchy swipe on Twitter this morning over the ratings:

Ergas’ conflict unreported. It’s a bit rich for the ABC’s The World Today radio program yesterday to try and portray a man who has been advising both the Liberal Party and Telstra in the past as an independent commentator on broadband policy. But that’s what the program did with Dr Henry Ergas. In the past he advised both former Liberal leader Malcolm Turnbull and worked as a consultant to Telstra. This is how the program described Dr Ergas and a representative from the internet industry yesterday:

“To discuss the merits of the two schemes I was joined a short time ago by Peter Coroneos from the Internet Industry Association, and Dr Henry Ergas who is a regulatory economist based in Canberra. He’s taught at universities here and abroad and previously worked for both the Productivity Commission and the OECD.”

Look here for the reference on Henry Ergas’s tax review for Malcolm Turnbull and look here for his work with Telstra. Why wasn’t his consultancy work for the Liberal Party, and especially Telstra, identified? — Glenn Dyer

ABC wordsmith signs off. Kel Richards — that doyen of ABC NewsRadio, friend to wordsmiths everywhere — is going commercial. The ABC has announced he’ll leave the public broadcaster after three decades to “pursue a new professional venture in commercial radio”. NewsRadio manager Helen Thomas says: “While NewsRadio listeners will certainly miss his gravitas and idiosyncratic style, I wish him the very best for the future”.

Thomas calls Richards “unique in the Australian media landscape. He’s presented AM and reported and produced news for television, but has developed a loyal following more recently with his Word Watch segment on NewsRadio. He’ll finish with the ABC, rather abruptly, on Sunday. — Jason Whittaker

Faine’s graffiti spray? ABC 774 Melbourne mornings host Jon Faine was the subject of some scurrilous graffiti recently at North Melbourne station that included the words “John (sic) Fayne (sic)”, an (incorrect) reference to the station’s Twitter account and the phrase “off chopz 4 life”. As our Crikey spy says: “We aren’t strangers to graffiti in this suburb but it’s always straight up tags and never of a political nature. I think you’ll agree this stuff is very odd.”

But what does it all mean? Faine told Crikey it was difficult to comment but questioned the vandal’s intentions. ” Is it as if I have written the graffiti…or am I alongside Satan as worthy of comment?” the veteran broadcaster mused. Interestingly Faine has been accused in some quarters of a gradual shift right-wards, which may explain another choice line on the wall: ‘F-CK THE FASHIONABLE LEFT WING’. — Andrew Crook 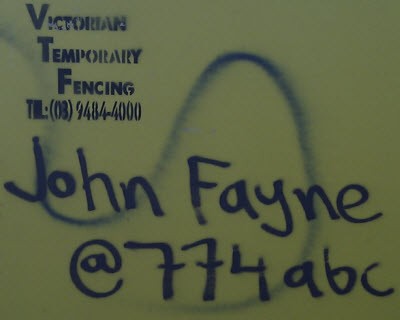 Good if you only read it for the articles

“Following the model of limited content and no nudity it initiated months ago with its iPhone app, Playboy projects the same approach larger on the iPad. The $4.99 Playboy HD downloadable digital version of the magazine for Apple’s Tablet gives you much but not all of the current August issue in a format customized for iPad swiping.” — Min Online

“Earlier this week Google and Verizon pledged to uphold a set of network principles that could transform the internet into a husk of its former self. Let’s look down the barrel of the Googlezon* future.” — io9

Photographers are people too

“A reporting colleague of mine from my Sunday Mirror days was outraged by Trinity Mirror’s decision to reduce the photographic staff for the Daily Mirror and its Sunday stablemate to just four. He does not believe that turning newspaper photography into a freelance activity is a beneficial move.” — The Guardian

What movies are playing on Google Street View?

“Google Street View is a wonderful tool/time-waster, but its pictures aren’t always current. This becomes apparent on its movie theater marquees, like the 20 inside this post. Wanna see a Sci-Fi or comedy flick from years ago? You’re in luck!” — Gawker

Why a journalism degree is worth it

“So, grad school made sense since I was hell-bent on journalism but jobless. I’m OK with having the same title, ‘intern’, as I’ve had for most of my adult life because by definition, it doesn’t last forever, and hey, you’re reading my writing. Am I screwed? Am I stupid? Maybe, but only on my worst days. But do I have J-School remorse? Absolutely not.” — Village Voice

News for your day: some papers are hiring

“After several rounds of cutbacks and a battle with its union over a new contract, Newsday is hiring. In a memo to the paper’s staff Wednesday morning, Editor-in-Chief Debby Krenek announced that the Cablevision-owned daily would hire 34 new reporters over the next six months and add 2,600 pages of additional news annually, or about seven pages a day.” — Crain’s

Heeeeeeere’s Johnny … on the internet

“Carson Entertainment Group, which owns the archive of the late-night host’s 30 years on The Tonight Show, is set to announce Wednesday that it has digitized all 3,300 hours of existing footage from the program and created a searchable online database for producers and researchers.” — LA Times

I also wrote to the ABC’s World Today, as an individual complainant, about the failure to disclose the conflict of interest that Dr Henry Ergas has. I don’t think I’ll get a reply but introducing him without that disclosure was irresponsible at the very least.

The Australian, perhaps unwisely, runs a headshot of Ergas over his articles. Disclosure enough?

Almost every day I seem to encounter another reason to loathe News Corp.

In my dreams, the ABC would bite back and run a series of exposes about Murdoch/News Corp, the history of this vile media empire, it’s record of interference in the electoral processes of major western democracies, some of its most outrageous components (how about a doco re: Fox News?), its outrageous long-standing biases towards war and Israel, its quasi-monopoly within Australia and the threat that many Australians believe this poses to the health of our democracy.