Who are the ordinary people? A favourite Crikey pastime come election time is to cast an eye over party propaganda to see if we can identify the “ordinary people” used in advertising campaigns. Representing The Greens in the knife-edge seat of Melbourne is the “this time I’m voting Green” mob comprising “Fiona” from Parkville, “Sharif” […]

Who are the ordinary people? A favourite Crikey pastime come election time is to cast an eye over party propaganda to see if we can identify the “ordinary people” used in advertising campaigns. Representing The Greens in the knife-edge seat of Melbourne is the “this time I’m voting Green” mob comprising “Fiona” from Parkville, “Sharif” from North Melbourne and the lovely “Evelyn” from North Fitzroy. The tone clearly suggests a recent Greens epiphany after years in the ALP wilderness:

But some cursory research reveals the billboard stars as fellow travellers. “Fiona” is Fiona McAlpine, Greens volunteer and the daughter of veteran party activist Ken McAlpine who serves on the party’s state executive and is a preference negotiator for the state election. “Sharif” is Sharif Slamet, the 25-year-old wunderkind regularly seen folding flyers at the Greens’ Brunswick Street office — sources close to the campaign have told Crikey that Sharif was chosen to illustrate the party’s “non white male demographic”. And the hard working Evelyn was present and even received a shout-out at the Greens campaign launch that Crikey covered recently (while the volunteer link was revealed at the launch, the public has remained in the dark).

On her Facebook page, McAlpine is interrogated by a friend over whether the “this time I’m voting Green” statement implied a recent conversion to the enviro-tinged side of politics. In 2007, Fiona protests she was in the Himalayas and couldn’t make it to a post office, however there’s no word as yet on what went down at the 2006 state poll.

Meanwhile, just who is the Colin Jacobs that keeps popping up in Greens profile pieces? The former south-eastern suburbs ALP member is the chair of Electronic Frontiers Australia and a key operative on Richard Di Natale’s Senate campaign, handling numerous media events over the last month.

The Greens’ rivals appear to be struggling with disclosure too. Labor candidate Cath Bowtell’s website shows a glowing photo of her chatting with regular dudes like Australian Manufacturing Workers Union communications officer Tim Chapman and former Monash University Student Union President and current Socialist Left Melbourne University Councillor Zoe Edwards. And what about the mysterious “Dan” from Abbottsford who “works in local government” and who has penned a screed titled “Why I support Cath Bowtell”. That’d be Dan Hogan, the Secretary of the Carlton branch of the ALP. (Feel free to email any more not-so-ordinary people to [email protected]) — Andrew Crook

Tony Abbott’s lunch no-show. Might be worth asking Tony Abbott why he pulled out yesterday of the St Vincent Institute fundraiser planned for today at the Park Hyatt in Melbourne. We can’t get them to say anything on the record but they have been left out of pocket with the Grand Hyatt. — a Crikey reader 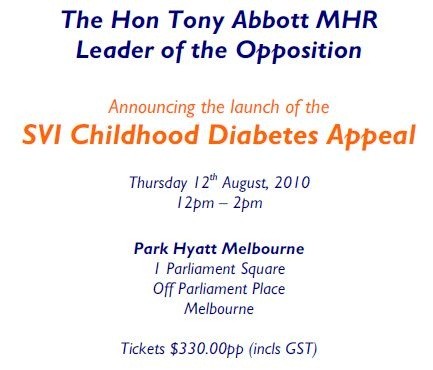 NBN times ten. Crikey‘s comparison of the major parties’ broadband policies is out of date just one day after being written. Labor’s National Broadband Network (NBN) will now deliver ten times the planned speed, 1 gigabit per second (1Gb/s) rather than 100 megabits (100Mb/s).

“The announcement by NBN Co to increase capacity on the network shows that fibre technology is truly about future-proofing the nation,” said communications minister Senator Stephen Conroy in Hobart with PM Julia Gillard this morning to launch the NBN in Tasmania.

The Coalition billed their $6 billion policy announced Tuesday as “affordable broadband”, Labor’s $43 billion NBN as an expensive white elephant run by an inefficient government monopoly. With both proposals having the same 100Mb/s headline speed, the Coalition had presumably hoped the differences wouldn’t be noticed by non-technical voters who’d see Labor as spendthrifts. Now the differences between the policies couldn’t be clearer. — Stilgherrian

Forget Paul the Octopus. Today I launch Crikey‘s election omen betting. It’s where I can combine my love of sport and gambling and slightly offset it with the Rooty Hill carnivale that is this Federal election campaign.

So how does this work? Every morning I’ll peruse the Australian meetings of the horses, the harnesses and the true sport of kings, the greyhounds.

On the basis on names alone I’ll choose five potential champions and put a $1 each way bet on them. And I’ll do this for the remainder of the campaign, keeping a tally of my net gain or loss.

Hopefully this will finally end the debate whether picking horses or dogs simply on their names is the only true way to bet on these magnificent beasts.

So here are my tips today:

My initial investment sees me $10 down but I am confident that I can recover this today. Hopefully Another Lefty salutes. C’mon you stupid latte-sipping nag! — Leigh Josey

Greens get the Gruen treatment. If you haven’t seen it yet, here is the excellent Greens ad produced by agency Republic of Everything for last night’s episode of Gruen Nation: 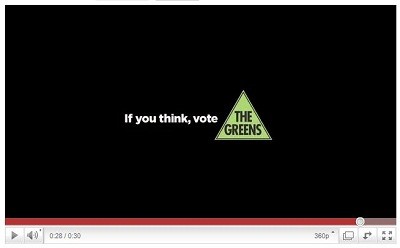 Big Brother at Rooty. Galaxy is investigating why Joel Scalzi — a former Big Brother contestant and son of a former Liberal MP — was selected as part of an audience of ‘undecided’ voters at yesterday’s Rooty Hill RSL Club forum. Scalzi, who appeared in the 2007 series of Big Brother as a Young Liberal, asked Abbott what the Coalition could offer him as an unmarried voter. David Briggs, the principal at Galaxy Research, would not comment on whether there was a Liberal Party bias in the audience, saying: “We are looking into that.”

Leaflet Watch. I’m in the Mayo electorate in SA, former seat of Alexander Downer. I have received a couple of very similar folded A4 leaflets in my box from Jamie Briggs, incumbent Liberal MP and former Howard adviser. The second one is notable for a few things: firstly the almost exclusive focus on local issues, secondly the unique green and lightish blue colour scheme, thirdly the fact that the Liberal logo only appears at the bottom of the last ‘page’. And last but definitely not least — the scant references to national issues and only one picture of a senior Federal politician: Joe Hockey. Absolutely no reference to Tony Abbott, boats, taxes, IR or climate change.

Good to see the guy focusing on local issues, but very strange that he’s avoided talking about most things Federal and Liberal. Does he think they are poison? — a Crikey reader

Which one’s the real Barnaby? Now to a lovely shot from AdelaideNow of Barnaby Joyce leaving an interview with his very own carboard cutout: 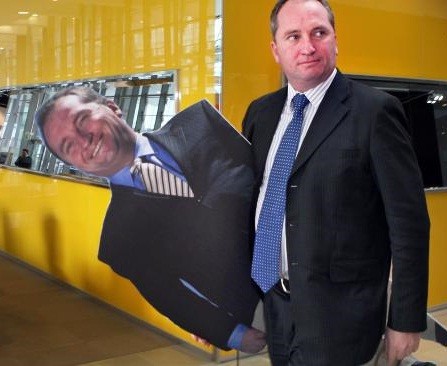 Separated at birth. Thanks to a Crikey reader who spotted some remarkable similarities between Casey MP Tony Smith and Tubbs Tattsyrup from The League of Gentlemen. 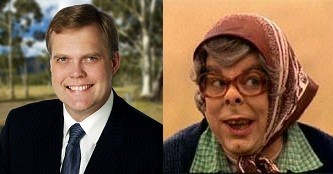 That anti-Greens ad on Gruen wasn’t half bad, either.

The real Barnaby is the one with the striped tie.

Hey, please can we have the Barnaby cut-out for his appearances on Q&A etc? It would make more sense.

Actually the pro-Greens ad was better, and as (was it Crabb or Todd Samson?) said, it will not be surprising to see the Greens using it.

@MRJ, not for the first time you exhibit a somewhat inelegant tendency to express your opinion as fact. An IMHO or two wouldn’t go astray.

But yes, the pro-Green ad was very, very good; certainly miles better than anything else they’ve been running. IMHO.

IMAO, all we read here is opinion.