And today’s awkward ad placement award goes to… Baby Azaria Chamberlain was the hot news topic of the day yesterday, thanks to the release of new police tapes about the investigation. But there was some unfortunate ad placement in the Herald Sun’s four-page special , where the recall for a baby coverall jumpsuit seemed eerily reminiscent of Azaria’s own blood soaked jumpsuit. — Amber Jamieson 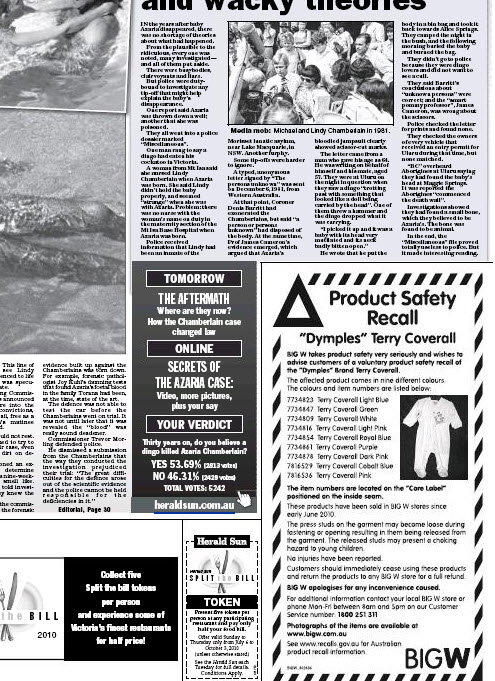 “Dating site OkCupid has completed a study about its users’ smartphones and sexual history and has determined that among people who use smartphones, iPhone users have the most sexual partners, followed by BlackBerry users and finally Android users.” — Mashable

“Dear King Of Shaves Australia, thank you for your tweet inviting me to vote for you in the FHM Awards. Here’s why I won’t be voting for you: 1. You didn’t say please. 2. I have a beard. 3. You’re spamming like a f-cktard.” — Mumbrella

“Police in South Korea have raided Google’s headquarters in Seoul. A police statement said they suspected Google has been collecting and storing data on ‘unspecified internet users from wi-fi networks’.” — BBC

“Levi Johnston may be following in Sarah Palin’s footsteps. Johnston’s manager, Tank Jones, on Monday confirmed a report on Variety magazine’s website that Johnston is planning to run for city office in his hometown of Wasilla, Alaska, as part of a reality TV show.” — Associated Press

How does a fake iPad compare?

“How close can a team of anonymous designers and engineers get to a real iPad for one-sixth the price? We take an in-depth look at both an M-003 knock-off and the real deal. “– ZDNet

That hilarious stinky-Farmville-playing-boss-quit story was fake

“Photos of an aspiring broker purportedly telling off her boss garnered widespread news coverage and more than 105,000 Facebook “likes” Tuesday. Too bad the story was published by two guys who have pranked the media before.” — Gawker

How editors make a good cover, as told by lol cats

“But getting to the right cover is not always simple. On any given day in the House of Onion you will find editors involved in the process of shepherding a cover from initial idea to finished design.” — Spike the Meanjin blog