. Australians are a happy enough bunch at the moment, according to the Westpac-Melbourne Institute consumer sentiment index. Plus, policy on the never never and other political news of the day.

A happy enough bunch. Australians are a happy enough bunch at the moment, according to the Westpac-Melbourne Institute consumer sentiment index. The figure for August released this morning of 119.1 was up from July’s 113.1

Westpac’s chief economist, Bill Evans, called it a very strong result. After tumbling by 15% in the wake of three consecutive interest rate hikes in March, April and May, the index has now recovered by 17% in the past two months. “It is now back to around the level it reached at the beginning of this year and the level we saw prior to the beginning of the rate hike cycle in September last year,” Evans said.

That will give considerable heart to the Labor government as it approaches the last 10 days of election campaigning. The big drop in consumer sentiment coincided with a similar decline in Labor’s standing in the opinion polls.

Policy on the never never. I wonder how long it will be before a politician starts making a promise to do something 10 years from now.? Not long probably, as the current lot of promises — such as Labor’s new railway for Sydney’s Western suburbs — have starting dates well into the parliament after next. It really is becoming a nonsense.

I’ll raise you a Princes Highway duplication. The Liberals went for the footballing vote yesterday with a re-announcement by the candidate for the marginal seat of Corangamite of money to expand the Skilled Stadium home ground of the Geelong Cats. Sarah Henderson even got herself a nice photo on page one of The Australian. Not to be outdone by such parish pump politics, Labor dispatched its trump Julia Gillard down to Geelong to pledge funding for the duplication of the Princes Highway between Winchelsea and Colac and ended up dominating the entire front page of the Geelong Advertiser. Call it a 2-1 victory for Labor in this wonderful game being played with our money.

Do as I say, not as I do. Politicians the world over have a wonderful capacity not to get too worried about a little bit of hypocrisy and of no one is that truer than the Republican Newt Gingrich, who is leading the fundraising pack in the quest for his party’s next presidential nomination. Among his many policy claims,  Gingrich is a family values man who repeatedly warns that President Obama’s “secular, socialist machine” is threatening to destroy America by undermining the Judeo-Christian “values” upon which the country was built. Now in an interview with  Esquire, a former wife has given an insight into what his family values actually mean as she was told by the good Catholic boy that he wanted a divorce

She kind of guessed it, of course. Women usually do. But did she know the woman was in her apartment, eating off her plates, sleeping in her bed?

She called a minister they both trusted. He came over to the house the next day and worked with them the whole weekend, but Gingrich just kept saying she was a Jaguar and all he wanted was a Chevrolet. ” ‘I can’t handle a Jaguar right now.’ He said that many times. ‘All I want is a Chevrolet’.”

He asked her to just tolerate the affair, an offer she refused.

He’d just returned from Erie, Pennsylvania, where he’d given a speech full of high sentiments about compassion and family values.

The next night, they sat talking out on their back patio in Georgia. She said, “How do you give that speech and do what you’re doing?”

Just to remind you, Newt Gingrich was at the forefront of the moves to impeach Bill Clinton for personal infidelity.

The Australian way of death. Heart attacks — or as the Bureau of Statistics classifies them in figures out this week, “diseases of the circulatory system — are down. Neoplasms — cancers and things — are growing as a proportion of the cause of death as are mental and behavioural disorders. The table below, with figures taken from the ABS report Causes of Death, Australia, 2008 compares the five years ended 2002 with the five years ended 2007. 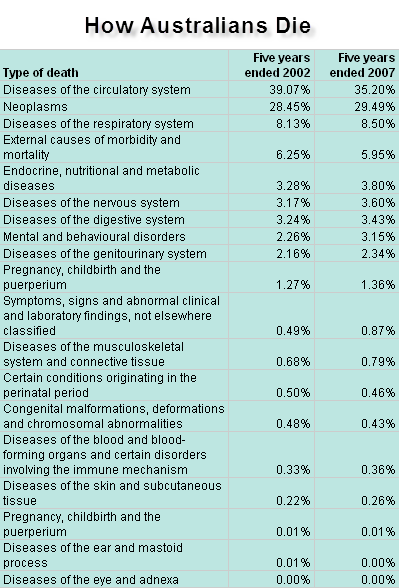 Re: the Australian way of death. Are any of these differences statistically significant? I don’t have the statistical skills to know this, but one of my fellow Crikey subscribers might.