Steven Fielding's latest Family First video is an absolute cracker. Plus, the ALP are a bit useless with playing with search engines and other campaign leftovers.

Wholesome fun for all the family. Steven Fielding’s latest Family First video is an absolute cracker. Titled Common sense without the violence, the 16-second spot depicts the graphic executions of Kevin Rudd and Malcolm Turnbull:

Search engine shenanigans. After hearing that the major parties are paying for top-ranking search results to pull “clicks” away from minor parties, I decided to investigate. True enough, a website titled AreYouVotingGreen.com appeared as a sponsored link, right below the Greens’ own site. Clicking on it however, it appears that the Labor Party has not yet mastered the art of messing with people on the internet. — a Crikey reader

Ban the budgies. Tony Abbott’s budgie smugglers continue to draw the attention of satirists around the county. Here is the latest effort from Sally Stewart and Emma Dowdell in Perth: 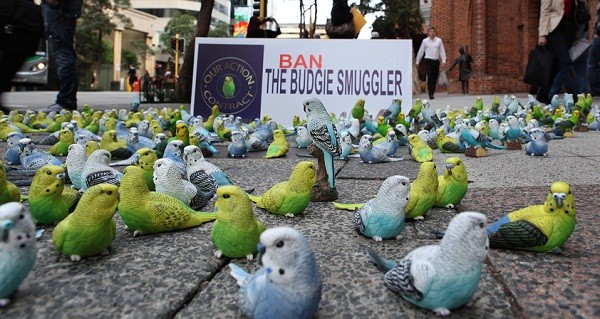 Leaflet Watch. Here’s one a Crikey reader sent in from Darren Jameson, Liberal candidate for the seat of Robertson, which reveals “Labor’s secret plans to drill for gas off Central Coast beaches”:

Big plunge on Labor. Sportingbet Australia have taken the biggest wager of the campaign to date, after one punter dumped $200,000 on Labor this morning to win the federal election. “Punters very rarely get it wrong when they bet like this and I would suggest Ms Gillard should be looking to get removalists booked so she can finally move into the Lodge,” said CEO Michael Sullivan.

Kudos to Sally and Emma.
Love the budgies. 🙂