Abbott and Gillard pump up the volume

The gap in volume between the two leaders narrows once again as the campaign enters the home stretch. Kevin Rudd is maintaining his "third leader" status.

No change in rankings for the top four, but the gap in volume between the two leaders narrows once again as the campaign enters the home stretch. Kevin Rudd maintains his “third leader” status miles ahead of any other politician, let alone any other backbencher.

Barnaby Joyce is the main mover, taking a far higher profile on ABC national programs this week and generally getting out and about a lot more. An interesting tactic, but we presume its because those ABC national programs give by far the biggest single hit across all rural and regional areas.

The other two main movers are Scott Morrison as the Opposition tries to maintain focus on both the boat arrivals issue and immigration levels, and Stephen Conroy, as the Government tries to get as much focus as it can on one of the very few areas where there is a significant policy difference between the parties. 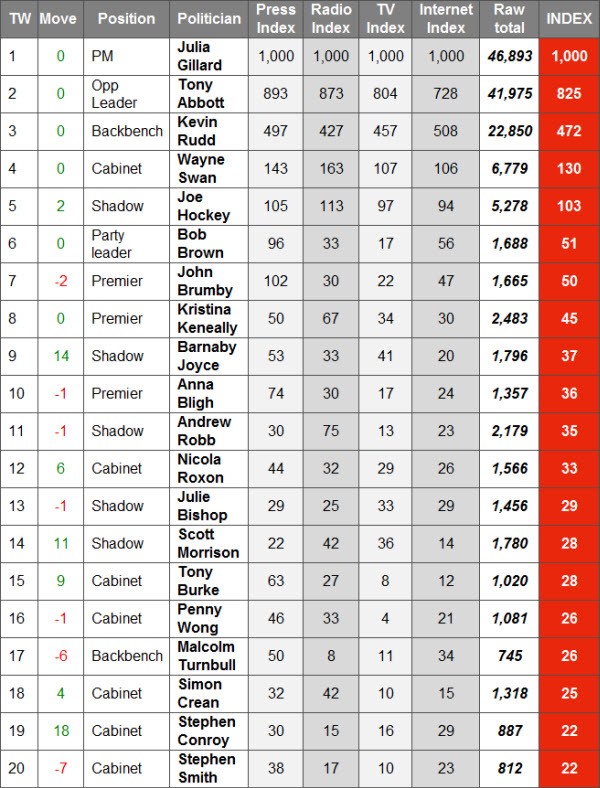 Things are also evening up a little on talkback across the nation, but Julia Gillard still has a clear lead on volume while Tony Abbott has a narrower lead in terms of favourability. Kevin Rudd remains a favourite topic on certain commercial stations.

Mark Latham’s excuse is that he needs to earn a living, despite the fact he currently enjoys a very healthy parliamentary pension, something, due overwhelmingly to his efforts, no-one elected at this poll or the last will enjoy until retirement age.

I suspect the real answer is good old Relevance Deprivation Syndrome, which has seen a cavalcade of egos from the past strut across the stage to add … well, not much of any use.