For 106 years, the seat of Melbourne has been Labor. But the old working class suburbs are now desirable inner-urban locales, the progressive middle-class is worried about climate change and the rank-and-file have withered on the vine, writes Shane Maloney.

They want me to go to Western Australia, check out those decisive marginals in Perth, do vox-pops with other blokes named Shane, big boofy Shanes in steel-caps and safety vests as they line up at the Skywest gate for their next three-on, one-off at Karratha. But I’ve been to Western Australia. It’s another country. All those South African flags. You have to draw the line somewhere.

Penrith, I’ll consider. It’s where the nation keeps its pulse, after all. Frankston without the glamour. Meanwhile, Melbourne beckons. Not just a shorter commute, it’s a cliff-hanger of an entirely different variety. If the Greens can increase their 2007 primary vote by five points and pick up enough preferences from the micro parties and Liberals, they might just make it over the line. The bookies have already given it to them, favourites at $1.60.

Densely populated and socially diverse, Melbourne runs from the container docks in the west to the Yarraside borders of blue-ribbon Kooyong in the east, extending up from the CBD through the gentrified and transitional inner-north to the snug suburbia of Ascot Vale. For 106 years, it’s been Labor. But the old working class suburbs are now desirable inner-urban locales, the progressive middle-class is worried about climate change and the rank-and-file have withered on the vine.

Without the widely-respected fingernails of Lindsay Tanner, Melbourne might already have slipped from Labor’s grasp. Now that Tanner’s declared himself hors de combat, it’s down to the demographic crunch. 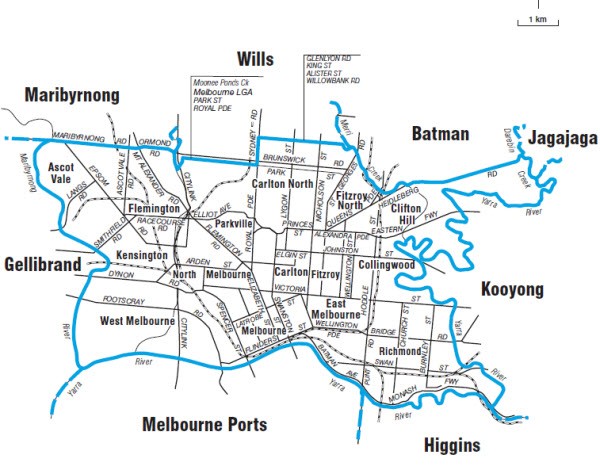 So on a bleak and wintry Thursday evening I’ve come to see demography in action at the Green’s campaign launch.

The venue is The Tote, the iconic grunge-pit pub in Collingwood that became a cause celebre in January when it was forced to close by the state government’s knuckle-headed, ham-fisted licensing laws. In a masterstroke of political genius, Brumby managed to alienate even the slacker vote, pissing off thousands of young punters in two of state Labor’s most vulnerable seats.

Death metal and bluegrass took it to the streets, The Tote is back in business now and green balloons are being inflated in the band room. The vintage, museum-quality sticky carpet has gone but there’s veggie kebabs and a stall selling Greens iPhone covers and insulated café late mugs. After the speeches, there’ll be a sosso sizzle and bands Milk Teddy and Crayon Fields. The Clash were evidently unavailable.

Most of the hundred-strong crowd range from mid-20s to early-40s, inner-urban early-adapters. A whiff of bohemia and a leavening of bright-eyed first-timers, but light on the dreads and not a crusty in sight.

The candidate, Adam Bandt, is an industrial lawyer. A former partner at Slater and Gordon, he once had Julia Gillard’s job. This is his second tilt at the seat. Since the last bout, he’s been putting himself about,  keeping up his profile. He ran a creditable second in the Melbourne council lord mayoral election against Robert Doyle, former leader of the state Liberals. He’s open, pleasant and a bit of a Poindexter.

Proceedings commence with some testimonial choreography. A succession of emblematic voters – a uni student, a Vietnamese-Australian girl, a gay, a disillusioned lifetime Labor supporter, an unemployed yoof, a global-warming worrier – step to the mike to deliver a brief, tight-scripted reason why they’ll be voting Greens this time. ‘This Time’ being the slogan.

Then up steps Brian Walters SC. With his chambers tailoring and silver hair, he looks like somebody’s father from Camberwell who’s arrived in the Audi to pick them up after the gig. Come the state election, he’ll be the Greens candidate hereabouts. He touts Bandt’s credentials, bigs up the applause and summons forth the candidate.

Bandt is buoyant. This is our shot to make history. The vision thing. Renewable energy. Infrastructure to defuse the population issue. A boost to Austudy. But first things first. Dig deep, put up those signs and posters, get out the vote.

The response is as enthusiastic as might be expected from a sober crowd at eight on a wet and miserable weeknight in the back bar of a scuzz-bucket pub in Collingwood. Still, it warms the cockles to see young folk fired with the possibility of changing the world, although I wish the shaghead standing beside me would stop d-cking around with his iPhone. Bandt tells me that droves of young twenties volunteers are fronting the campaign office. I can’t help but wonder if some of the lambs realise how very hard the Labor party is working to disappoint them.

Mid-afternoon the next day, I’m sitting in a pho joint in Victoria Street, Richmond, witnessing Labor in action.

This is Little Saigon, a solid half-kilometre of restaurants, bakeries, appliance stores, grocers, the full rice-paper roll.  The occasion is an appearance by Infrastructure Minister, Anthony Albanese, combined with a meet-and-greet by Tanner’s would-be replacement, Cath Bowtell.

The object of their attention is the soup shop’s owner, Vietnamese newspaper proprietor and local chamber  of commerce worthy, Mr Ho. The atmosphere is informal, the table laminex, and the elderly Mr Ho is well muffled against the weather. There’ll be an outdoor component.

Mr Ho’s associates, younger men, relax over melanine teacups. Framing the proceedings is Josh Funder, a think-tank founder and venture capitalist who represents this ward on the local council. Tanner is there to pass the baton. He’s well-known here, a man in his element. Bowtell, eased onto the ticket at short notice and without the usual preselection malarkey,  appears content to sit pat and soak it up.

Albo arrives, fresh from announcing his high-speed-rail feasability study, an idea Labor voted down when the Greens raised it three months ago. He looks a bit trail-weary and heavy-burdened, an itinerant peddler braving the icy blasts of the frozen south. A cup of the fragrant perks him up and he’s soon trading comparisons with his own Mekong-infused seat of Grayler in inner-city Sydney. Mr Ho knows Marrickville well. His newspaper, Nhan Quyen, comes out weekly in Sydney. Albo lifts.

And now for a quick toddle up the street for some formalities.

At his previous stop, Albanese was talking future infrastructure. Now he’s standing under the antique iron and concrete rail bridge that crosses Victoria Street between a defunct shoe store and  the Salvos op shop.  Thanks to Labor’s infrastructure spend, it has qualified for a half-million dollar cosmetic make-over. Culturally appropriate motifs will be applied and thematic light stanchions installed. Council staff have set up an easel with pictures and Mr Ho and the party posse pose for the camera.

Street traffic in Victoria Street isn’t limited to cars and trams. This bit of smartening-up, the lighting in particular, may tend to discourage some of the hollow-eyed types working the corner trade. There are plenty of Gillard’s alarm-setting, early-rising homework doers in this neighbourhood and a bit of civic refurbishment won’t go astray. Pix snapped, Albo pops off to North Melbourne, where he’ll announce a $3.5 million upgrade of the Arden Street footy oval.

I dog Cath Bowtell back to her car, lunging at her Latham-like and brandishing the full canteen of disillusionment cutlery. The climate failure, the phoney ETS, the absent vision,  educational inequality. Evidently not a natural banterer, she maintains her sang-froid and feeds me the pabulum. How does a woman once slated to head the ACTU, a lead union campaigner against Work Choices, regard Gillard’s blatant teacher-bashing?

With equanimity, apparently. Ditto the ongoing funding of the plushest private schools.

Dismounting my high horse, I go hunting for a bottle of nuoc mam and I run into one of Mr Ho’s companions. He operates some sort of one-man marketing, trader-liaison business along the strip. Tanner is well-liked, he tells me in choppy English, always there for the Tet festival. And the Vietnamese don’t have a problem with a woman prime minister. But Cath Bowtell,  nobody recognises her. She needs to make her face known. I point to her campaign poster taped to the shop window behind him. “If they ask us,”  he says. “We help them.”

A little reciprocity goes a long way around here. The housing commission blocks that rise beside the shops are one of Labor’s key backstops in Melbourne. Half their 3000 residents are Indochinese. Many take their cues from Mr Ho & Co. The same applies in the six other estates dotted across the electorate from Flemington to Fitzroy to North Melbourne, each with a distinct ethnic component. Carlton, café latte central, is securely Labor, thanks to the presence of the flats. All up, the flats house more than 21,000 people, few of whom are about to turn Green.

The ALP inherited these people when the working class was vaporised. They rely on the government and their local member is an important point of connection with an often-mystifying state apparatus. They generate a hefty workload for their representatives and it is here that we see Labor doing the job which it claims to do best. Looking out for the vulnerable, ameliorating the excesses, welcoming the needy stranger, building a civic consensus. Here is where it earns and displays its social democratic stripes.

It’s hard to imagine senators Conroy or Arbib or Feeney demeaning their shoe-leather with pavement-pounding retail politics. It’s down to the Cath Bowtells of the party to do the heavy lifting. Whether she can lift Labor over the line remains to be seen. Meanwhile, the planet is getting warmer. More and more boatloads of major-party refugees keep coming over the horizon,  threatening the borders of once-safe seats. Already, tentatively, they are reaching out to the residents of the estates. Nhan Quyen means “human rights.”

Sooner or later, Melbourne will fall.

Rudd and the battle for Melbourne: ‘I’m more progressive than you are’

After starving myself all morning on Tweets and the Australian, what a relief to come across a mouth-watering Maloney sandwich. Thanks Crikey.

“Frankston without the glamour.” Priceless.

“More and more boatloads of major-party refugees keep coming over the horizon, threatening the borders of once-safe seats.” True.

Thank you, Shane, for another amusing, evocative portrait of an electorate and its candidates. But you, Lathamlike? I don’t think so! If I remember correctly, you are much too diffident, not to mention polite, to behave anything like that bull-necked thug.

What a terrific article!