Topless times in Kalgoorlie? It will be interesting to see whether any of the media coverage of the Diggers and Dealers conference in Kalgoorlie — attended by Liberal deputy Julie Bishop along with mining’s biggest wigs — mentions the nak-d waitresses that typically feature at its official receptions. Or perhaps they won’t be there this […]

Topless times in Kalgoorlie? It will be interesting to see whether any of the media coverage of the Diggers and Dealers conference in Kalgoorlie — attended by Liberal deputy Julie Bishop along with mining’s biggest wigs — mentions the nak-d waitresses that typically feature at its official receptions. Or perhaps they won’t be there this year …?

Bowtell gets no help from Brumby. After John Brumby’s launch of his climate policy last week at an inner-city Melbourne school, the following was observed. Cath Bowtell, the Labour candidate for Melbourne, stepped forward to introduce herself to Brumby with “hello John, I’m Cath Bowtell”. The Premier and his party did a quick side step around the happless Bowtell without acknowledgment. Bowtell was obviously hoping for some of that positive climate change policy to bask in for the forthcoming fight against Adam Bandt of the Greens, but Brumby is probably not too keen to be connected to federal Labour climate policies in the run-up to the Victorian election. Who said politics wasn’t a tough game?

ALP’s eye off the ball in Robertson. Yesterday was the first day of pre-poll voting in the federal election. In the seat of Robertson, narrowly won by dumped MP Belinda Neal at the last election, new Labor candidate Deb O’Neill forgot to send someone to hand out how-to-votes. There was no one there until 1pm when Tom Hollywood, an employee  of the NSW Premier, turned up. Good to see that taxpayer money is being used to prop up the failing head-office candidate. This failure could cost Labor the seat.

Is Bob all hot air? In recent weeks there has been all sorts of talk about banning balloons from public events for environmental reasons. Obviously someone forgot to tell the organisers of the Greens national conference … 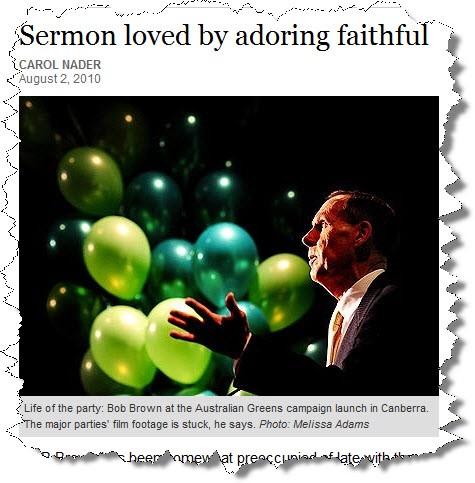 Why the Democrats are backing the Liberals. Here’s a copy of an ACT Democrats e-mail about preference deals:

You will soon be hearing in the media (if you haven’t already) about a decision to give our Senate preferences in the ACT to the Liberal Party.  No doubt this will upset some members, so let us explain why it has occurred.

As horrible and undemocratic as they are, it is necessary to lodge a Group Voting Ticket (preference decision) with the Australian Electoral Commission for above-the-line voting.  The decision to allocate our preferences to the Liberals was not taken lightly and not without considerable angst.

If there had been a moderate “centre” party, group or independent (or other like-minded party) they would have figured strongly in our deliberations.

Gary Humphries is a moderate Liberal,  Someone who a few years ago would have been referred to as a “wet” or a “small l Liberal.”  People such as Don Chipp and Greg Barns would be regarded similarly.

Should we find ourselves with an Abbott Liberal government after the election, Humphries could be a much-needed hand of restraint on Mr Abbott’s shoulder and voice of reason in their Party Room.  He has demonstrated this in his preparedness to cross the floor in the interests of the ACT and his call for electoral reform to improve our democracy.  Having the guts to dissent and cross the floor for the sake of your constituents is what “keeping the bastards honest” is all about.

In some states the Australian Democrats have preferenced Labor, e.g. Victoria and SA (laced ticket — 1 Lab, 2 Lib, 3 Lab, 4 Lib, etc); in some we have held to the traditional split-ticket but Greens higher, eg, NSW, WA, Qld; and in others, ACT and Tas, we have preferenced the Liberals.

In all cases, we have considered the interests and acted on the merits of the individual case, and the greater good of the Australian Democrats, both in this election and for the future.

If you have an issue with this decision, we encourage you to take the Australian Democrats preferred option of voting “below-the-line” and direct your preferences where you want them to go.

A gay old time in Mardi Gras elections. If you think the federal election campaign is boring, remember that the New Mardi Gras board election and AGM is being held the same day as the federal election. It’s much more interesting: a loss of more than $500,000 to be reported to members after the ill-fated parade party split and Spencer Tunick; 14 candidates for eight board positions, including one applicant who has resigned from the board twice after not getting his own way, and another who left mid season for a job overseas under mysterious circumstances; and with factions that would make the NSW ALP blush. All in the drama-filed splendour of NIDA!

The CEO who won’t admit he’s wrong. It takes a big man to admit he’s made a mistake. So what to make of the CEO who refuses to acknowledge he made an error in appointing a manager whose only achievement to date has been to have over half his staff leave within weeks of his appointment? Will the CEO continue to back his manager when the final staff member leaves the building? And who will turn off the lights?

“Passengers are carrying weapons and explosive material on to Australian flights as new figures reveal almost 180 major security breaches at airports in the past year.”

Not quite the splash first planned, plus the Brisbane Times published the same figures on July 15. I also hear they paid $1000 for the information, despite other news services getting it for free.

In case you were wondering … Had Julia Gillard called the election a week earlier (August 14)  it would have occurred on Bartholomew Augustine (BA) Santamaria’s birthday.  Still, if Tony Abbott wins he can be sworn in on August 24, a date immortalised by the St Bartholomew’s Day Massacre of 1572.