Maloney’s Marginalia: Herbert, a place “kicked up the arse by a rainbow”

Thanks to a recent redistribution and the retirement of long-time Liberal incumbent Peter Lindsay, Herbert is up for grabs, writes Shane Maloney.

By happy coincidence, Melbourne author Shane Maloney found himself at Parliament House on the night of the long knives. Each week, Crikey will be sending Maloney to a different marginal seat so he can continue to wade shoulder deep through the entrails.

Today, we kick off the series with Herbert, in far north Queensland: 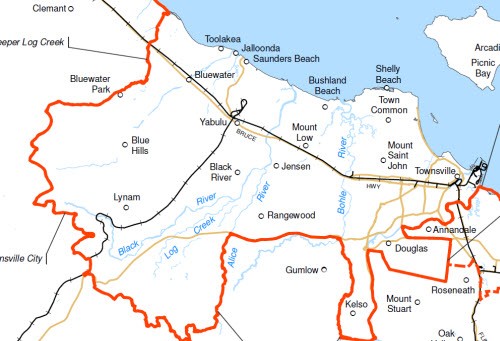 Two air force helicopters are thudding towards me across the water, whomph-whomph, tracking low along the shore-line from the direction of the ore loading terminal. Straight ahead, Magnetic Island looms from the choppy, slate-grey Coral Sea, sheathed in cloud, beyond it the reef. Just over the horizon to my right lies Palm Island. Below me, locals are power-walking designer dogs along the Strand, taking their morning constitutional on Townsville’s green and lovely beach promenade. To my rear, a city of 180,000 sprawls back into the hinterland, wrapping itself around the massive red granite knob of Castle Hill. James Cook University and Lavarack Barracks are back there somewhere.

This is Herbert, one of Queensland’s hot-button marginals, and I’m getting most of it at a glance. The military, mining, metals, cargo, tourism, public servants, students, blackfellers.

Thanks to a recent redistribution and the retirement of long-time Liberal incumbent Peter Lindsay, Herbert is up for grabs. Informed psephology puts the margin at a knife-blade .03%. Preferences will decide the issue and the final count might well come down to postals cast in Tarin Kowt.

But the big event is a month away and this is a place, in a phrase attributed to the immortal Barnaby, “kicked up the arse by a rainbow”. Apart from a flying visit by JG to promise a PET scanner that KR failed to deliver, the contest has yet to raise its head.

To find out what the punters make of it all, I’ll have to go to the races. Plenty of punters at the track, I’ve been given to understand. On the way, I suss out the Liberal campaign.

Ten on a Saturday morning and Tony Abbott’s hope in Herbert is standing alone beside Thuringowa Drive in Upper Ross, out at the far edge of the suburban fringe, waving at the passing traffic. You can tell he’s the Liberal candidate because there’s a sandwich board beside him with a poster of his face on it and the word “Liberal”. The traffic hurtles past, six lanes of it, returning his salute with the occasional toot, the odd finger.

Ewan Jones describes himself as unsophisticated. He’s not gilding the lily. Generous waisted, easy mannered, ruddy faced, he’s this southerner’s mental image of a far-north Queensland politician. An auctioneer with a near-zero local profile, he joined the Liberal Nationals in the wake of the last year’s state election and promptly got the nod when Lindsay decided to bail. It’s not about selling himself, he reckons. It’s all about connecting the national talking points with the local issues. Health, for example. A population this size and if you need a scan, you’ve got to fly to Brisbane. Much promised, little delivered. I ask if he’s getting any traction on Rudd as a done-over banana bender. Seems the issue doesn’t cut much cane around here. Rudd’s from the south-east corner, which might as well be Hobart as far as the average FNQer is concerned.

Jones sticks his sandwich board in his boot and heads off to watch his young son play little league soccer. He’s going in the direction of the racetrack, so I hitch a lift. We drive past the barracks and the suburb of Annadale, solid Liberal until it was excised in the redistribution and shifted into Labor-held Dawson. Heartland, says Jones, but not part of his inheritance.

At the Murray sports fields, junior soccer is going off, big time. Many pitches, dozens of teams, hundreds of parents. It’s all shin guards and Home Brand cheezels and advertising-strength Aussie family fun. Not a lot of black faces, though, for a town with a 6% indigenous and islander population. Maybe junior rugby league is more their thing. I whip out my pad for some quick vox pops but my heart’s not in it. This is a fun-first, competition-second kind of happening and I don’t want to grubby anybody’s rainbow.

So it’s off to the nags at Cluden Park, five minutes away. And by happy chance, this afternoon is the big event of the calendar, Townsville Cup Day. A major roll-up is a dead cert, and not just blokes. What with Fashions on the Field, it’s a crowd puller for the ladies, too. The full demographic.

And what a sight they make, dressed to the nines in platform stilettos and feathery fascinators, sipping their cans of Bundy and Coke through bendy straws. The chaps are none too shabby either. The big look this year is the black shirt, white tie, wraparound sunnies combo.

I find the Labor candidate, Tony Mooney, in the betting ring between the bookies and the big screen feed from Morphettville. Townsville mayor for 19 years until resoundingly turfed in 2008, he’s since been working for the Queensland government and IPA. He’s very picture of a managerial politician. Trim build, immaculate suit, brush-cut pepper-and-salt hair, finger on the pulse, he is hailed and handshook by all and sundry. Some of the local ALP membership complain that he was shoe-horned into the candidacy by Kevin Rudd and the membership was denied a preselection vote, but that’s a standard rank-and-file bleat. It’s not like they’re going to vote Liberal, is it?

Eyes on the results board, Mooney gives me his take. It’s pretty much the same as his opponent’s. National issues will decide it. “If Julia Gillard isn’t elected, I won’t be either.” His selling point is the added value his experience would bring to the job. “Experience to Deliver” is his slogan. Yield Curve is his tip for the cup.

I invest $5 each way and dive into the 12,000-strong crowd, just in time for the hats. Jeanie Hunter takes it out with a class chapeau, securing the $100 gift voucher from Cheryl’s Boutique. 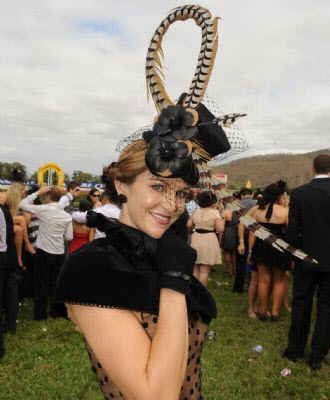 As seen at The Townsville Bulletin website. Go here for the full gallery.

No worries about the vox pop here. The lubricants are flowing, the neddies are running and the punters are happy to talk. According to my private polling, four out of five women in strapless frocks like Julia Gillard. 67% of males under 30 think “whatever he just said”. Chicks with ankle tattoos could go either way. Blokes in cowboy hats favour Tony Abbott. Most men in tartan pork pies believe it don’t matter who you vote for, does it, a politician always gets in.

Meanwhile, they’re racing. And it’s Tora, Tora, Tora by a nose. Yield Curve runs second. At least I get my money back. I ask about the Greens but focus group has lost its focus. Silk roses lie trampled on the lawn and the bodice hoicking turns endemic as gravity’s eternal battle with the strapless frock enters its terminal stage.

As night settles, I’m sitting on the veranda of an old Queenslander, eating fish and chips with my native informant. Both the major candidates reckon race won’t be a factor, but Mooney ruffled some local black feathers during his time as mayor and the 600-odd votes on Palm Island are no longer reliable. Given the narrow margin, a cohesive indigenous turn-out could even be the decider.

It won’t happen that way, of course. Out of sight is out of mind.

Shane Maloney is author of the Murray Whelan series of crime novels.

Tony Abbott flubs it on transparency

Can’t say that I have ever heard Townsville described as FNQ (Far north Queensland) before. My time in Queensland, admittedly 30 odd years ago, FNQ was confined to Cairns and northwards.
Townsville is North Queensland, Rockhampton is Central QueenslandMaybe times have changed but I doubt it.

A nice portrait of Townsville, Shane, but it’s definitely not Far North Qld – that would be Cairns, Cape York Peninsula and Torres Strait. Herbert is only halfway up the Qld coast, after all, in North Qld. A fine point, maybe, but an important distinction to Far Northerners – we call Townsville, “Brownsville”, and “Mt Isa by the Sea”.

Go Tony! Mooney, that is.

It’s a great article Shane, with extra points for the hat pic. 🙂

Nice job Shane. While we’re putting people straight on the local nomenclature I should point out to Ron E. that since we got connected to the Burdekin Dam and seriously got the water supply into management it’s no longer Brownsville and in recognition of Castle Hill, the outstanding landmark in the middle of Town, it’s more accurately described as Broken Hill by the Sea.
Also, I wouldn’t underestimate the passion of the snubbed local ALP branch membership – many are seething and they know how to cause a ruckus if they’re really riled. Tony Mooney goes way, way back with the local ALP, way beyond the Shepherdson (electoral rorting) inquiry (where His Honour advised Mooney that he’d better get a lawyer son, a real good one) at least back to the Mundingburra re-election of 1996 which was what brought down the Goss ALP government. Back then the AWU faction forced a change of candidate and hauled Mooney out of the Townsville mayoralty to run (for the second time) for a state seat – over the hotly expressed wishes of the local branches. Labor branch members defied the State ALP machine and campaigned against Mooney, handed out at the booths against Mooney and in very many cases were happy to state publicly that they voted against Mooney – for the Liberal candidate, who went on to win the seat. You’d think it wouldn’t happen but Mooney has such an outstanding record in the branches in Townsville that it’s well and truly possible the Lib’s virtually anonymous candidate will actually increase the Coalition’s margin.

Good article Shane (love your books!) pardon my pedantics – ‘Two air force helicopters are thudding towards me across the water’ – the RAAF doesn’t have any helicopters, the Army stole them in 1986 – bast-rds!! Also, Stephen Martin is correct – FNQ is the area north of Cairns.