Who won the news cycle? Take no notice of worms

Our noble little Crikey Election Indicator has not taken any notice of those worms that slithered across our screens last night declaring Julia Gillard was the election debate winner.

Our noble little Crikey Election Indicator has not taken any notice of those worms that slithered across our screens last night declaring Julia Gillard was the election debate winner.

Perhaps our market based assessor was reflecting a reaction to the opinion polls which seem to be showing things getting closer but whatever the reason it has scored things in Tony Abbott’s favour albeit with only a small decline in the predicted probability of a Labor election victory. After a weekend showing the Government as a 79% chance to the Coalition’s 21%, late this morning the Government probability was down to 76%. 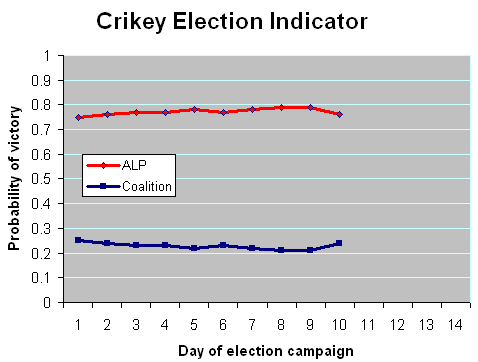 Not that Labor will be too concerned as they are still winning the campaign as measured by our daily winner campaign barometer. 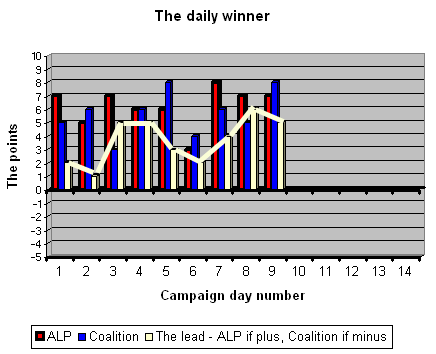 I admit to having difficulty coming to grips with declaring that Labor had a winning Friday on the campaign trail when the keynote speech of the Prime Minister on climate change was full of such fatuous and meaningless spin. Yet give the day to Labor we must because most people will not be judging Julia Gillard on what she actually said but the way she said it.

That’s the sad truth of politics in the television age and on the box she managed to give the impression of being concerned with the future of the warming planet without offering anything other than more talks about what to do to stop global warming.

Then there was the composure Ms Gillard showed in the face of hostile heckling from students as she plowed on delivering her nothingness. As the security men hauled the demonstrator away she did not miss a beat and will get merit marks for being so unflappable.

Meanwhile on the other side of the continent, Tony Abbott in Perth was trying again to stir up antagonism towards the Labor Government for not being macho enough in dealing with uninvited people arriving near our northern coast on boats. The problem with this Abbott approach is not the words, it would appear, but the way he delivers them.

If the succession of opinion polls showing Labor comfortably in front tell anything meaningful it is that women, by a quite significant margin, intend to vote for the leader of their own s-x rather than the man and I expect one reason for that is Tony Abbott raising his voice too often. Harsh words do best when delivered softly.

If it really is working class red-necks in the outer suburbs who are angry with Labor then giving them a bonus trade in on old bombs of cars, as the PM did on Saturday, is probably sensible vote-winning politics. I’m not sure about the environmental advantage of the $2000 for clunkers policy, mind you, but then neither side is the slightest bit interested at the moment in policies that might actually be to the long term good of the country.

Everything said and done at the moment is a a crude appeal for the votes of the unthinking. Saturday’s Liberal Party recycling of money for security cameras to “cut down” on suburban crime is another wonderful example of that.

Overall, Saturday was another clear campaigning win for the Government, giving them a six point lead for the week. Far too much in the first week of Tony Abbott talking to men in suits and talking about wife and daughters is not going in itself to make him more appealing to women voters.

Sunday was debate night with no other campaign activity of any significance. And on our screens we saw a more restrained and thus less frightening Tony Abbott. It might be politically perverse, but the Opposition Leader did not have to win the debate to win the campaign day. All he had to do was leave viewers with the impression that he was capable of being Prime Ministerial and he certainly did that. I thus scored the day as a marginal victory for the Coalition.