It’s day three of the campaign (or should that be day 4?) and the pollies are already clocking up the frequent flyer miles. Julia Gillard has racked up 3,742 km in the race so far (as the crow flies), while Tony Abbott has notched up a relatively paltry 1,421 km.

It’s day three of the campaign and the polliticians are already clocking up the frequent flyer miles, as Tony Abbott made his first shopping centre visit of the campaign and Julia Gillard hit the stump in north Queensland. Gillard has racked up 3,742 km in the race so far (as the crow flies), while Abbott has notched up a relatively paltry 1,421 km. 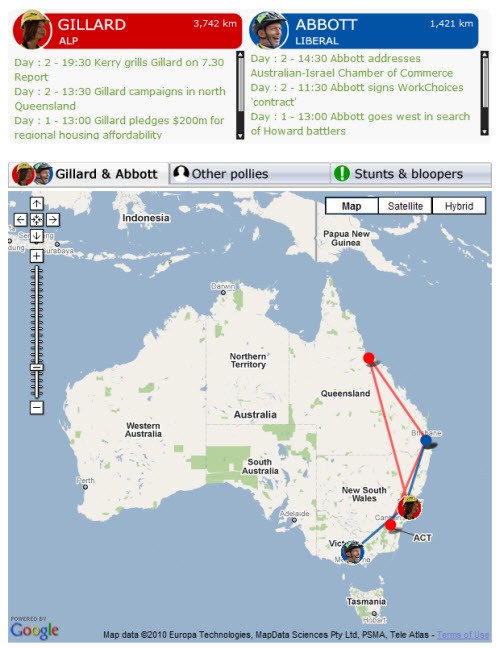 The first weekday of campaigning is down and already the two big contenders are moving in opposite directions on the map. Here at Crikey we’ve been pin–pointing the movements of Gillard, Tony Abbott and co as they zip around the country on our Election Tracker.

Here’s what happened yesterday, Day 2 of what proved to be an eventful day on the hustings:

The stunts came thick and fast yesterday, with both sides partaking in some campaign tomfoolery:

Where are they moving today?

Click on the tabs across the top to watch the how many kilometres Gillard and Abbott have clocked up, the movements of other key players and finally our bloopers and stunts bonanza on the right. You can click on each stop to see what they’re up to, with links to extended coverage and detailed electorate information.