Brumby’s rail may run through my laundry

Details remain incredibly sketchy, but it looks like my modest weatherboard may be spared from the Brumby Government’s decision to clear between 26 and 50 houses in Footscray to make way for a new rural rail corridor, writes Footscray resident Pat McGrath.

Details remain incredibly sketchy, but it looks like my modest weatherboard may be spared from the Brumby government’s decision to clear-fell between 26 and 50 houses in Footscray to make way for a new rural rail corridor through Melbourne’s west.

It is still unclear what course the new track will take and when construction will begin, but residents in the area are slowly piecing together their own map and schedule for the project. It looks as though a stretch of houses along Buckley Street, which runs parallel to the existing line, will go. But it’s still unclear where my street, which connects Buckley Street to an overpass leading to central Footscray, fits into the plan.

What is clear, however, is the absolute PR blunder that is unfolding in the government’s compulsory acquisition process and indeed almost every other aspect of its dealings with Footscray residents in the project.

The Age and the Herald Sun were scathing on Tuesday when it was revealed that residents on Buckley Street were unaware of their homes’ impending demolition until journalists turned up on their front doorsteps to get the reactions.

John Brumby has since apologised for the communication glitch, saying: “I’m sorry that these people were not contacted, they should have been.”

Yesterday morning, the Premier said “every effort” had been made to contact residents at the same time as he was announcing the route of the rail line to a business lunch at a restaurant in the city. Transport Minister Martin Pakula has also claimed that department representatives had planned to tell residents on Monday, but were beaten to the scene by the journalists and their TV crews.

Pakula said the department representatives decided it was not appropriate to share the news in front of TV cameras, presumably lest an elderly later resident appear on the 6pm bulletins doubled over in anguish over the news. A much better PR strategy, they seem to have reasoned, was to not tell the residents at all.

Whichever quick-thinking public servant made that decision will no doubt be looking to meet a few additional KPIs before this year’s performance review rolls around.

In search a clearer picture of the development, I went to the rail projects’ website in search of a map with details of where the proposed track will run. All I found was the same map that has appeared in my letter box several times over the past six months, which shows roughly half of southern Victoria and a squiggly line passing through a red dot labeled ‘Footscray’, through another dot labelled ‘Sunshine’ and on towards Geelong.

The site also features two new animations — one with the squiggly line (which, if scaled correctly, must be about 20 metres wide) mercilessly snaking its way from Geelong to Southern Cross station. The second animation shows, in beautifully rendered detail, a shiny V-Line train cruising along Footscray’s new rail line. This remains the clearest representation so far of what route the track will take. I watched it over and over, pausing at the point where the train’s rolling stock passes through the current location of my laundry basin. 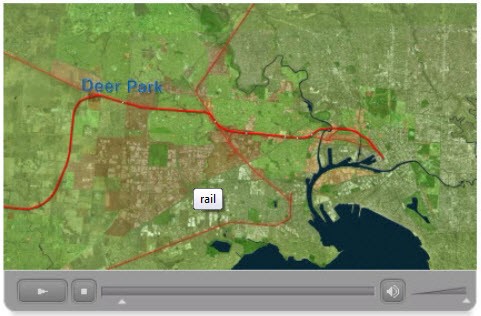 But the information was still patchy, which is the overriding theme in this tale. While I can hardly claim to be fully engaged in the local community (after all, my partner and I have only lived in the area for six months), there seems to have been a bare minimum of active consultation on this project.

Some efforts have been made, and a few months ago the government opened an ‘InfoHub’ near Footscray Train station, which seems (I’ve never been inside) to have roughly the same opening hours as an 1860s bank.

It’s difficult not to think how this process would have unfolded in, say, the eastern suburbs, where a legion of NIMBY community groups are poised to pounce if local town planner even thinks about sneezing. I wonder how Barry Humphries and Geoffrey Rush, who campaigned so fiercely against the Camberwell train station redevelopment, would react if they were presented with an animated squiggly line wiping out a bank of bungalows south of Burke Road.

Aside from the scarce consultation process, perhaps the most unnerving aspect of the meager process has been the language used by the government throughout this episode. ‘InfoHub’ speaks for itself, as does the strange mantra — “It’s all part of the plan” — which now adorns various government buildings in the area and all the letterheads of all the correspondence we’ve received about the plan.

But by painting this plan with such broad strokes, the government has not only left the affected residents confused, but ultimately disengaged with such an important development. It’s hard not to feel that an entire suburb has been patronised.

Yesterday, I rushed home to find out what news my letter box would hold about the fate of my (rented) home. There was no compulsory acquisition notice. There was, however, a market research questionnaire asking: “How did you find out about this development?” (I plan to tick ‘the media’) and another squiggly-line map. 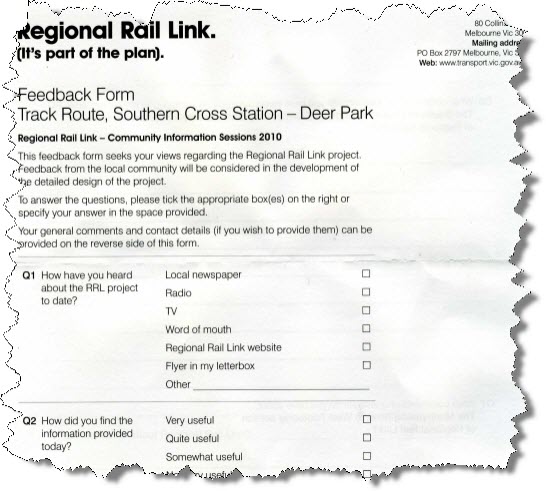 Who knows where the rail line will be but have you considered the underground rail line that runs under footscray station (perpendicular to the above ground tracks). Maybe (im guessing) they will be updating and modifying that line and the bridge it runs over to the docks. Which will mean no houses will be affected in Footscray.

They’ve ruled out using the Bunbury Street tunnel – it’s used for freight and interstate passenger trains and apparently they want to keep it that way! Paul Mees (RMIT) has argued for this option in the past as it uses existing infrastructure.

Pat, I love your article, it encapsulates everything I and other Footscray residents have been feeling! In a word: Patronised. We’ve been calling it the “No-Info Hub” – it wasn’t even open the day after the announcement, presumably because all the staff were at Buckley Street engaged in damage control.

I filled in one of those forms we were sent about three months ago at the Info Hub; never heard back about it.

Footscray has been safe Labor for a very long time; I think there’s a growing feeling that Labor takes us for granted. It might not be so safe in the future, particularly as the Greens (and even the Liberals!) seem to champion the causes of residents more often than the incumbents. I’d be interested to see some stats, if there are any…

The non-info hub reminds me more of a cross between a 1950’s beautician and a mobile phone store that sells A4 coloured paper.

What a waste of money (its all part of the plan).

PR, marketing, informing etc for this kind of thing is next to impossible to do well. You are critical of the fact that residents found out from TV crews first, but as you stated yourself, this was a mere few hours after the project was announced. If instead of announcing it publicly at an open meeting somewhere, the Government had of informed the residents first, then a mere hours after the first granny opens a letter there would be headlines demanding the Government ‘come clean’ and ‘release all the details’ to everyone. There’s really no way to tell everyone that needs to know all the details simultaneously, and the media will pounce for comment from anyone ‘left in the dark’ if someone else found out 5 minutes before they did.

I’m not saying the Government has been exemplorary here, but take a step back and try and appreciate the difficulties, and put yourself in their shoes. How would you go about it?

I would involve the community from the very beginning. Layout all the options – point out the positives and negatives of each proposal and allow the community to be part of the decision-making process.

There will always be losers in a project that requires compulsory acquisition, but removing this culture of secrecy will dissolve the outrage people feel when they are excluded.

Governments are currently more interested in a press release that the welfare of their citizens.