The perfect example of why we love the NT News today, with a perfect trifecta on their front page. Plus, cheap press releases and other media tidbits from around the globe.

The NT trifecta. The perfect example of why we love the NT News today. Not only does the front page feature an obligatory crocodile yarn, and plug a local bikini competition, it manages to catch the Prime Minister in a Nazi salute. We salute you, NT News. 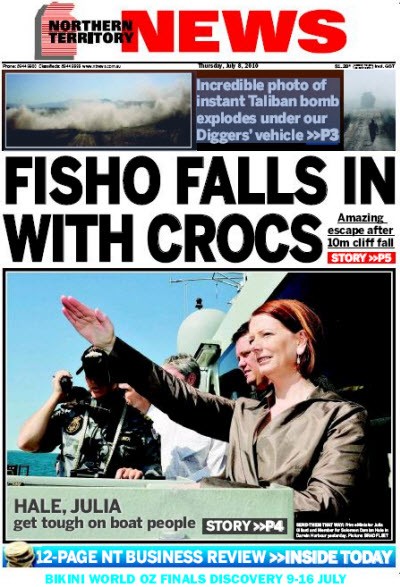 Press releases on the cheap

“A PR agency has launched a low-cost model of outsourced public relations help in what it claims is a new business model. It offers online help in writing press releases and also rents out databases of journalists based on the subject area.” — Mumbrella

“Time has decided to dive head first into an issue that has bedeviled many a news organisation before it: how to wean online readers off their addictions to free content.” — New York Times

“What makes the New York Times the font of bogus trend stories? Is it overstaffed with blockheads, or, as the nation’s finest newspaper, is it simply subject to greater scrutiny than other news outlets?” — Slate

“CNN on Wednesday removed its senior editor for Middle Eastern affairs, Octavia Nasr, from her job after she published a Twitter message saying that she respected the Shiite cleric the Grand Ayatollah Mohammed Hussein Fadlallah, who died on Sunday.” — New York Times

“Having already come back from the dead once, Hey Hey It’s Saturday will go into suspended animation in a fortnight with its producers fervently hoping that no one accidentally flicks the switch while it is off air.” — The Age

Unlocking the best of the iPad

“Tech-savvy iPad users are hacking into the software innards of the device to unleash new features and access underground applications.” — The Australian

“NT Vessels” is going soft?
They didn’t airbrush her into a bikini with a crocodile rising from the water to the bait, and a ‘tash (her not the croc)?

Surely it’s a quadrella from the Northern Territory News.

Hale (sic) means sound and healthy in my version of English.

Yeah I know our PM looks fit and healthy, but I didn’t think she was to be called hale (and hearty?)

Maybe they’re in a drought, and the editor got her mixed up with the new wether girl, and this was how they tell if it’s raining “drunks and crocs (in bikinis)”, or “Julias” – when it gets so hard and icy it can dent your boat?