The prestige and influence of Wayne Swan and his department suffered mightily this morning, following the scrapping of the mining super profits tax

Treasurer and Treasury the losers. The prestige and influence of Wayne Swan and his department suffered mightily this morning with the scrapping of the mining super profits tax which was the one major element of the review of the national taxation system that the Labor Government had agreed to introduce.

Now the report of the committee headed by Treasury Secretary Ken Henry will remain in its pigeon hole as a memorial to the difficulties in our system of government, with its three year parliaments and the lack of a majority in the Senate, for difficult decisions to ever be taken.

Federal dominance strengthens. There is one difference in what is now to be called the Minerals Resources Rent Tax — the Commonwealth Government has now crashed into one of the few areas that was left where State Governments raised a significant amount of the money they spent.

The iron ore and coal industries will now pay a share of their profits as a royalty on what they dig out of the ground rather than a fixed rate per ton. That is, of course, if the new tax ever becomes law. Just because there is now a basic agreement between a Government and a section of an industry does not ensure that it will.

The gauntlet of getting a bill through the Senate, where neither Labor nor Coalition will have a majority after the coming election, remains. Only when Bob Brown and his Greens become a party to an agreement is there actually an agreement at all.

Not that Prime Minister Julia Gillard is the slightest bit concerned about that. For her this whole question of taxing mining profits was something she wanted to be able to pretend was settled. Retaining power is virtually the only thing she and the Caucus members who put her in the job have on their minds.

As I have written many times, if the first duty of a politician is to win office then the second is to retain it. Kevin Rudd was sacked as Labor Leader because he had become politically vulnerable to a charge of not standing for anything. His colleagues deemed that the back-flip Gillard has presided over would have been fatal to him and thus them.

Too risky to play all or nothing. For the big three mining companies — BHP Billiton, Rio Tinto and Xtrata the time for a strategic retreat coincided with Labor’s need for a settlement.

Naturally they would prefer not to pay more in taxation than they do now. But they were also aware of the risks involved in campaigning strongly against the Government and their efforts failing with Labor being returned.

They did not want to play all or nothing and have now reduced the game to one of paying something if Labor wins the election and nothing if the Coalition does.

Howard a strange choice. Politicians running sport is par for the course in India and Pakistan but it has rarely been a feature of how things are done in Australia. Labor Senator Ron McCauliffe was at one time the supremo of Queensland rugby league but that was back in the dim dark age when Queensland had its own competition and New South Wales reined supreme and his involvement was very much the exception. 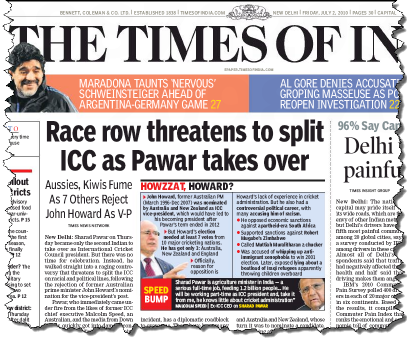 Strange it was then that Australian cricket administrators chose former Prime Minister John Howard to be the man to become its nominee as the vice president of the International Cricket Council who would go on in a couple of years to become its President. It was as if we were accepting that the Asian sub-continent’s way of doing things was the correct one.

Now Australia has suffered the indignity of having its choice rejected by a majority of the ICC membership. I suppose that’s the kind of thing that happens when play by the rules of allowing politics into sport.

If Rudd’s a slave to opinion polls, then surely he’ll back down on RSPT

How Swan let Rudd down

Wayne Swan should consider himself lucky to still be treasurer and super-lucky for becoming deputy PM.
Ken Henry’s future is not assured with either a Labor or Liberal government.

I was not too keen to see Howard nominated as ICC VP, but the way this has now been handled is apalling Still waiting to see what the rationale is for rejecting Howard. “Political” would be the ultimate hypocrisy.

Now the PM’s of Australia and NZ get involved and support Howards intention to leave his name in the ring. I thought it was a sporting appointment to be made by sports bodies. The Australian CB started the rot by approving Howards nomination originally, knowing NZ had a superior candidate in all aspects except one. He was not or had been a politician and that should not have entered the equation. Howard had form on too many touchy subjects.

Keep politics out of sport – and who embodies the ultimate “political animal” more?
Wasn’t it more the case that this was New Zealand’s turn to toss up a body, but their big brother somehow got a “Chappell” under their guard?
And Howard, in government, in charge of the purse strings, for almost 12 years? Is there a sniff of pay back (“twice”, ironically).
These people upset about the shift in power, where were they when we were lording it over “the subcontinent, and those others”?
Besides, under this “Oz Cricket” “admin team”, there’s teams around that even sledge better than we do now, too!