The glossies that can’t get enough of Julia

Julia Gillard mania has well and truly hit the nation’s consciousness this past week. It seems we just can’t get enough puff pieces and souvenir liftouts about our freshly minted PM.

Julia-mania has well and truly hit the nation this past week. It seems we just can’t get enough puff pieces about our freshly-minted PM.

The women’s interest mags in particular have contracted a pretty severe case of Gillard fever and have gone hard with a spectacular array of commemorative colour pieces. Woman’s Day have splashed Gillard and partner Tim Mathieson all over their latest edition, while Women’s Weekly have commissioned a special issue 32-page souvenir Julia liftout to be inserted into its July edition. 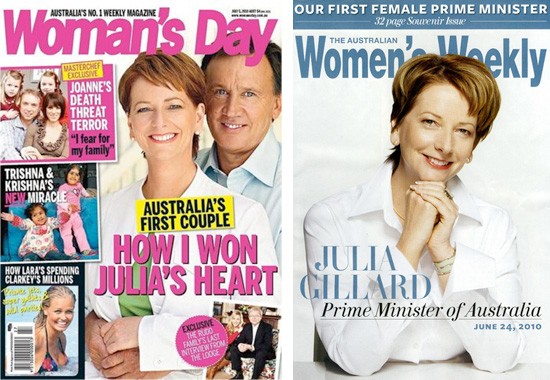 Some of the stuff inside is so sickly sweet it’ll rot your teeth. Readers are treated to touching pieces about the PM’s family, her dreams and Tim the hairdresser. There were even comments from some “well-known Australians” on the rise of Julia, including this pearler from a certain former prime minister:

Speaking to The Australian, ACP group publishing director Phil Scott reckons it’s pretty rare to stray from the holy trinity of Bingle, Brangelina and Botox and put a pollie on the cover of a women’s mag: “Generally, politicians are the worst thing you can put on a cover, but my hunch is Julia’s the exception that proves the rule.”

Of course, it wouldn’t be a glossy without some focus on fashion (‘Julia Gillard’s hair: how it’s changed’), however the PM also receives special praise for ensuring her fashion sense has gone mostly “unnoticed”. Not, it seems,by the nation’s newspapers.

The tabloids have been redwashed this week, with the fashion police reserving a special endurance for their assessment of Gillard’s looks. According to the Herald Sun, fashionistas have “given their vote” to Gillard’s outfit choice for her first public appearance as PM, ranking her on par with that other fashionable political luminary Michelle Obama.

Over at the Western Weekender, they were scolding Julia for daring to wear a skirt with “white polka dots the size of golf balls”, while the SMH also went a bit polka dotty, comparing Gillard to former Victorian premier Joan Kirner.

Meanwhile, the Gold Coast Bulletin has bravely declared we can “forget about immigration policy, carbon trading and the mining tax” because “much of the real focus will be on the new PM’s fashion”.

It’s no revelation that style has become a significant factor in the popularity contest that is federal politics. Kevin Rudd was ordered to ditch his sideburns, Tony Abbott has been ridiculed for his choice of swimwear and John Howard eventually succumbed to the pressure to trim his eyebrows.

But the intense coverage devoted to Gillard’s looks over the past week makes us think it won’t be long before we’re all immune to Julia fever.

Gillard’s first weekend on the job

Crikey Campaign Leftovers: Julia’s ‘most revealing’ chat … some lessons from Peacock … calling off the S-x trade …

What about the “availability” of this latest “media darling”, and what they did to the last one when they had a good hold of him?

What else could you expect from these crap magazines?

The sad thing? They’ll be better than all the analysis coming from ABC, Fairfax, Newscorp and all the ‘serious’ outlets…