Roadkill of the week: killing two birds with one car

The penalties for the unauthorised possession of wildlife in the NT are high - for an individual the maximum penalties range from $65,000 to $130,000 and are of course much higher for corporate offenders.

There has been a fair bit of discussion this past week over at Birding-Aus, one of my favourite Australian bird-nerd sites, about what to do when you find a dead bird on the side of the road.

The person that raised the question found and stashed a dead Southern Boobook owl near a railway line while walking to the train station one morning station and subsequently asked the group for tips on what to do with the carcass when he returned from work that evening. The bird was later identified as the Tasmanian sub-species of the common Southern Boobook Owl Ninox novaeseelandiae leucopsis. He apparently hadn’t stashed it very well and found to his dismay when he went to recover the carcass on his way home that it was gone.

This led to all manner of speculation on the part of his correspondents – the bird was just “playing dead“, it had been snatched by a fox or some larger raptor – or just maybe someone found it and chucked it in a bin…

Most of the discussion on Birding-Aus was of the constructive and practical type, including that if you find a dead bird on the side of the road, particularly one that was a fresh kill and relatively intact, then you should take it to a museum or local national parks office so that they can put it in their freezer and, eventually, pass it on the the ever diminishing band of taxidermists that prepare museum and display specimens of dead things. Another purpose that road kills serve is for trainee biologists to cut up for examination and training.

During the residential component of the Graduate Diploma of Ornithology course I did many years ago at the Albury campus of the Charles Sturt University a great swag of dead birds was dragged out of the freezers and laid on the lab tables for us to gut and prepare as museum specimens. Specimens are invaluable to the work of taxonomists and systematists whose work tells us much about the relationships between species of birds.

Over the years I’ve passed more than a few fresh road kills onto the freezers of various museums and I’ve always have had some questions about the legality of having dead birds in my possession, particularly when I would accumulate quite a few in the freezer at home between trips to town.

The NT, in common with most state jurisdictions across Australia, asserts legislative authority over the use and possession of most animals – including birds – within its boundaries. In one sense this is eminently sensible because the are some very good reasons why governments should do so – to prevent and act upon the taking of rare and protected species and to guard against inappropriate harvesting of wild animals for commercial purpose.

But I’ve always had some lingering concerns about the broad sweep of these laws – they can catch you for having a feather in your hat – or a dead bird in your freezer. usually commonsense prevails but there have been a few horror stories concerning the overreaction of zealous enforcement officers.

The NT’s Territory Park & Wildlife Conservation Act is typical of breadth of these laws across the country.

Section 43 establishes the concept of “protected wildlife” – this captures all vertebrate animals.

(1) All wildlife that: (a) is in a park, reserve, sanctuary, wilderness zone or area of essential habitat; or (b) is a vertebrate that is indigenous to Australia, is protected wildlife.

(2) The Regulations may prescribe species of wildlife that are protected wildlife.

(3) Despite subsections (1) and (2), the Minister may, in relation to the whole or a specified part of the Territory, declare by notice in the Gazette that a species of wildlife is protected wildlife.

“Animal” is defined in section 9 of the Act:

9. “animal” means a member of the animal kingdom other than man, whether dead or alive, and includes:

(d) the progeny of an animal , including larvae, pupae, an animal in an egg or any other embryonic form;

(e) a part of an animal , including an exudate, a secretion or reproductive material; and

(f) a chemical or other extract derived from an animal .

Section 66 establishes a number of offences relating to the “taking”of and “interference” with wildlife. The current value of a “penalty unit” in the NT is $130 – so for an individual the maximum penalties range from $65,000 to $130,000 and are of course much higher for corporate offenders.

(1) A person must not take or interfere with protected wildlife unless the person is authorised to do so under this Act.

Penalty: In the case of protected wildlife other than threatened wildlife:

(a) if the offender is a natural person – 500 penalty units or imprisonment for 5 years; or

In the case of threatened wildlife:

(a) if the offender is a natural person – 1,000 penalty units or imprisonment for 10 years; or

(2) A person must not have in his or her possession or under his or her control an animal that is protected wildlife unless the person is authorised to do so under this Act.

Penalty: In the case of protected wildlife other than threatened wildlife:

(a) if the offender is a natural person – 500 penalty units or imprisonment for 5 years; or

In the case of threatened wildlife:

(a) if the offender is a natural person – 1,000 penalty units or imprisonment for 10 years; or

And unwary collectors of roadkilled birds may also get caught by the provisions of the NT’s Biological Resources Act 2006, which has the primary objective facilitating bioprospecting in the Territory – but that is a whole other story. 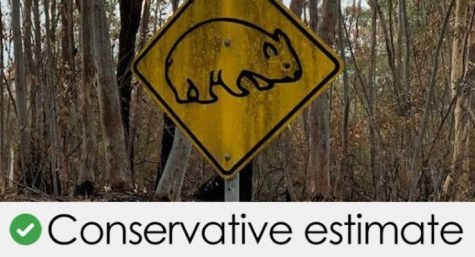 Have more than 1 billion animals died this bushfire season?

Bird of the week – the Night Parrot (maybe) resurfaces