Now that Julia Gillard has been appointed PM, there is marginal improvement in the probability of Labor retaining office when the federal election is finally held.

Steady as she goes. A new leader and the market reacted only ever so slightly this morning with a marginal improvement in the probability of Labor retaining office when the election is finally held.

A final back-flip. Quite appropriate really that his term ended with yet another back-flip. Last night Kevin Rudd was challenging his party to defy factional bosses and remember that the public had elected him Prime Minister not those bosses. This morning at the Caucus meeting he meekly changed his mind and did not even stand. So much for a man who lost because he did not have the courage of his convictions.

Boys on men’s errands. Finally the colleagues revolted. They had had enough of being treated as mere pawns in the political game by boys that the Prime Minister sent out from his office on men’s errands. The final indignity was having the unelected chief of staff sounding out elected MPs on whether the Deputy Prime Minister was loyal or not. When you show that kind of disloyalty you are repaid with disloyalty.

Back to Cabinet government. A step back from the concentration of power in the PM’s office is a certain consequence of the leadership change. Julia Gillard might have been a member of the Rudd gang of four but she has enough brains not to create an equivalent kitchen cabinet of her own. Nor will she allow her staff to project themselves as being more important in the scheme of things than those that elevated her to the leadership position. Proper Cabinet meetings where ministers have the opportunity of putting a point of view before decisions are made will surely avoid some of the mistakes that ended up destroying Kevin Rudd.

Credit where it’s due. I admit I was a bit dismissive when I read Dennis Shanahan in The Weekend Australian still going on about the prospect of a leadership challenge before Parliament rose for the winter recess. I was even more so when Monday’s Newspoll put Labor still in the lead but the veteran was right. Which I knew from the moment the talkers on Sky News last night told me that Laurie Oakes had come back from holidays to cover the goings on in Parliament House.

Heroin and cocaine decline while synthetics rise. The World Drug Report 2010, issued overnight by the United Nations Office on Drugs and Crime (UNODC), shows that drug use is shifting towards new drugs and new markets. Drug cultivation is declining in Afghanistan (for opium) and the Andean countries (coca), and drug use has stabilized in the developed world. However, there are signs of an increase in drug use in developing countries, and growing abuse of amphetamine-type stimulants (ATS) and prescription drugs around the world. 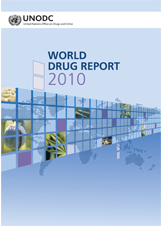 The global number of people using amphetamine-type stimulants (ATS) – estimated at around 30-40 million – is soon likely to exceed the number of opiate and cocaine users combined. There is also evidence of increasing abuse of prescription drugs. The ATS market is harder to track because of short trafficking routes (manufacturing usually takes place close to main consumer markets), and the fact that many of the raw materials are both legal and readily available. Manufacturers are quick to market new products (like ketamine, piperazines, Mephedrone and Spice) and exploit new markets. “These new drugs cause a double problem. First, they are being developed at a much faster rate than regulatory norms and law enforcement can keep up. Second, their marketing is cunningly clever, as they are custom-manufactured so as to meet the specific preference in each situation,” the organisation said.

The number of ATS-related clandestine laboratories reported increased by 20 per cent in 2008, including in countries where such labs had never been detected in the past. Manufacture of ‘ecstasy’ has increased in North America (notably in Canada) and in several parts of Asia, and use seems to be increasing in Asia. In another demonstration of the fluidity of drug markets, ecstasy use in Europe has plummeted since 2006. 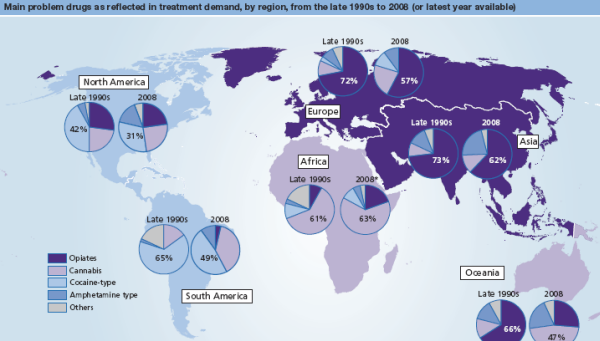 Cannabis remains the world’s (and Australia’s) most widely produced and used illicit substance: it is grown in almost all countries of the world, and is smoked by 130-190 million people at least once a year — though these parameters are not very telling in terms of addiction. The fact that cannabis use is declining in some of its highest value markets, namely North America and parts of Europe, is another indication of shifting patterns of drug abuse.

UNODC found evidence of indoor cultivation of cannabis for commercial purposes in 29 countries, particularly in Europe, Australia and North America. Indoor growing is a lucrative business and is increasingly a source of profit for criminal groups. Based on evidence gathered in 2009, Afghanistan is now the world’s leading producer of cannabis resin (as well as opium).

I think it is a bit rich to say Rudd lacked the courage of his conviction by not contesting the leadership this morning. Perhaps he had the good of the party in mind.