Silence from media on IPCC apology

The Sunday Times has apologised for its sham IPCC ‘Amazongate’ story. But will The Oz, the ABC, Fairfax and many other outlets do the same?

Watch this space for an embarrassing backdown by The Australian over a front-page story attacking the Intergovernmental Panel on Climate Change and the World Wildlife Fund for an “unsubstantiated” claim that 40% of the Amazon rainforest would be wiped out by global warming.

After months of deliberation the story, by Sunday Times journalist Jonathan Leake, was exposed as a sham in a weekend mea culpa published in The Australian‘s sister paper and brokered by the UK Press Complaints Commission. The complaint, lodged by Royal Society scientist Dr Simon Lewis, slammed The Times for publishing “inaccurate, misleading or distorted information”.

On February 1 this year, one day after the Murdoch UK flagship splashed with the story, The Australian also decided to adorn its front page with the report, which has now been comprehensively debunked. It stated that the claims of Amazon destruction were based on the views of  “green campaigners who had no scientific expertise”.

The “scandal”, dubbed “Amazongate”, was repeated and re-reported across the media, including outlets like ABC’s Radio National (The World Today), 2GB’s Alan Jones and The Sydney Morning Herald and even featured in a Crikey wrap.

In fact, the WWF had simply failed to properly footnote the passage, which was later confirmed to be based on a peer-reviewed study by the Amazon Environmental Research Institute. The Amazon claims in the initial WWF report were later picked up by the IPCC. 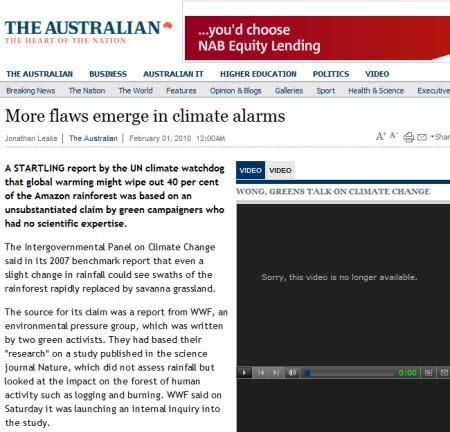 “In fact, the IPCC’s Amazon statement is supported by peer-reviewed scientific evidence. In the case of the WWF report, the figure had, in error, not been referenced, but was based on research by the respected Amazon Environmental Research Institute (IPAM) which did relate to the impact of climate change.”

The Guardian‘s media commentator Roy Greenslade is one of the few journalists to cover the correction:

I think that sets the gold standard in “corrections”. Its publication was brokered by the Press Complaints Commission, and I understand from the PCC that there were good reasons for the four-and-a-half-month gap between the article appearing and the settlement. But why did it take so long for the paper to admit it had got the whole thing wrong. And why didn’t its headline simply say: “Sorry, our reporter screwed up and we got it wrong”?

The Australian‘s editor-in-chief Chris Mitchell confirmed to Crikey early this afternoon that he was preparing to issue an apology in the wake of the Press Complaints finding and The Sunday Times backdown. “I think we will…I had not seen the correction”, he said.

The discredited story also stated the Amazon research was related to “human activity” rather than climate change and falsely quoted Lewis as saying the IPCC was wrong to refer to the WWF report. Furious, Lewis approached the media regulator demanding an apology from the paper, and the story’s removal from The Sunday Times website. Both demands have now been acceded to.

In its weekend backflip, The Sunday Times was forced to grovel to the WWF report’s authors: “We also now understand and accept that Mr Rowell is an experienced environmental journalist and that Dr Moore is an expert in forest management, and apologise for any suggestion to the contrary”.

“We accept that Dr Lewis holds no such view – rather, he was concerned that the use of non-peer-reviewed sources risks creating the perception of bias and unnecessary controversy, which is unhelpful in advancing the public’s understanding of the science of climate change. A version of our article that had been checked with Dr Lewis underwent significant late editing and so did not give a fair or accurate account of his views on these points. We apologise for this.”

“Amazongate” came hot on the heels of the notorious “Climategate” fracas, covered extensively in The Australian, that exposed leaked emails sent by climate scientists from the University of East Anglia. The emails, high-profile critics claimed, undermined the IPCC’s global warming thesis.

News Limited columnists, including Andrew Bolt, revelled in the new developments as they started to break. In a blog post titled “Now the IPCC sexed up the Amazonian danger, too”, Bolt accused the panel of publishing “wild scare-claims, many based on unchecked statements by activist groups”: 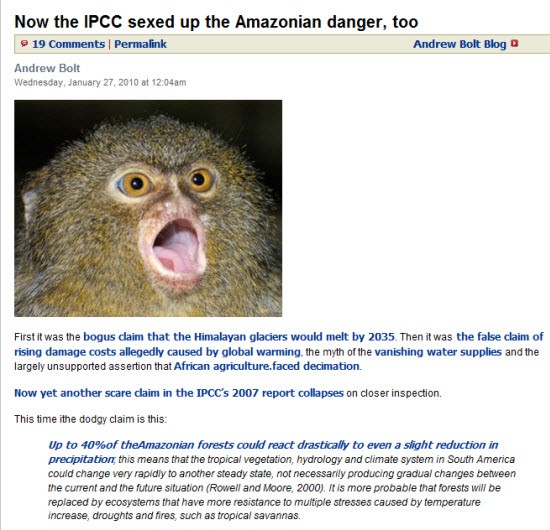 No word on a correction on Bolt’s blog as yet.

UPDATE 2:38pm: Since Crikey went to press The Australian has removed the “Amazongate” report from its website. For the curious, it is still available here.

Typical, I bet we won’t see any front page apology though from the OO.

There probably won’t be an apology from the BoltA, because he knows EVERYTHING and peer reviewed research is hogwash! He should know – he never does research of any kind before shooting his mouth off!!
Some of Bolt’s comments on the Insiders (ABC), especially on climate change, are so stupid they reflect on the ability of this program to have any credibility at all. I sent an email to the Insiders last year complaining about Bolt and his ability to never let the facts get in the way of a good story. The reply, after some weeks, basically said Mr. Bolt?? was a valued member of their team, and would continue his appearances on the program. In other words – we have no intention of listening to our audience. Bloody typical – they all know everything!!

Tucked away somewhere in the back pages I would imagine.

Funnily enough the link on Crikey’s main page now leads to a 404 – page not found.

This is a good one for Jonathan on Media Watch. I’ll bet it doesn’t happen though.