Read all about it in <em>The Capital Post</em>: newspapers are fine, OK?

On Tuesday night, some of the most powerful politicians and media executives in the country descended on Canberra for a curious soiree. But it isn't likely to save newspapers.

On Tuesday night, some of the most powerful politicians and media executives in the country descended on Canberra for a curious soiree.

According to a report in today’s Sydney Morning Herald, Kevin Rudd, Tony Abbott, Fairfax CEO Brian McCarthy, News supremo John Hartigan and Chris Wharton, CEO of Western Australian Newspapers, met to mull over the future of newspaper advertising which most analysts agree is about to fall off a cliff.

Big Harto has had a big week in Canberra, hitting the tiles on Wednesday at the Press Gallery’s Mid-Winter Ball, but the business end of the trip occurred 24 hours earlier, with a none-too-obvious plea to save the printed word through a boost from government and opposition advertising coffers in an election year.

The Rudd government has already announced $38.5 million in fresh spending on the Resources Super Profits Tax, with the mining industry hitting back with a reported war chest of up to $100 million of its own. But well under half of that will end up on newspapers’ bottom lines.

The mysterious editorial equivalent of a wayzgoose occurred under the aegis of industry lobbyists The Newspaper Works, of which Hartigan, McCarthy and Wharton serve as board members. According to the group, despite their diminished stature, newspapers still bring in about $3.5 billion a year in advertising revenue.

Newspaper Works, which has a history of shining a positive light on plunging circulation figures, even presented Abbott, Rudd and their chiefs of staff with copies of a bizarre Fairfax-News hybrid, The Capital Post, which Crikey obtained a copy of today. 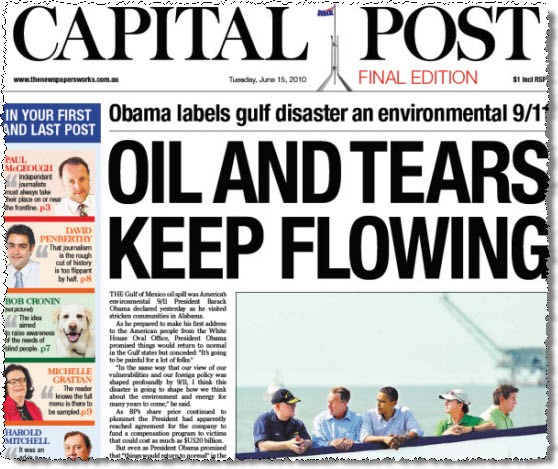 In an excellent example of a collaboration (or mutually assured destruction), a Paul McGeough SMH dispatch from Istanbul is lined up next to a James Chessell treatise on blogs from The Australian. Michelle Grattan sits snugly next to News Limited’s David Penberthy’s recent interrogation of Pim Verbeek, alongside government advertisements warning of the perils of the drug ice. 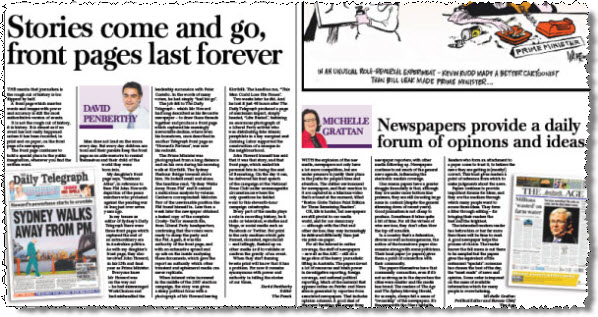 On the front-page sidebar, media buyer and Queen’s Birthday honours recipient Harold Mitchell extols the virtues of newspapers: “It was an ad in a newspaper that changed my life.” The cover price is cheekily listed as “$1 incl RSPT”. 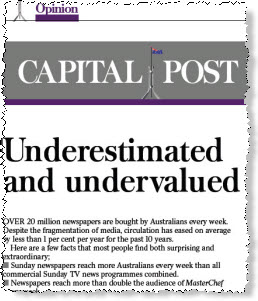 Still, even with an inflated cover price, the future for the industry isn’t exactly rosy.

According to media analyst Roger Colman from CCZ Equities, less than 30% of government advertising will be spent in newspapers. And the election season isn’t likely to bring happy tidings for the printed page either.

While the election will see unions, political parties and the Commonwealth outlay about $265 million ($100 million or so less than 2007) on promotions surrounding the poll, only around 11% of that will be spent in press advertising, which includes magazines. In terms of the total newspaper advertising spend in the Australian market, only 1% relates directly to the federal poll.

Colman told Crikey that a TV advertising spend of around $13,950 per month, reaching 4.137 million viewers on digital channel GO! for instance, equates to an advertising rate of rate of just 0.33 cents per viewer. Newspapers, it seems, don’t deliver anything like value for money.

“They’re overpriced for their readership they deliver to advertisers, it’s a wonder advertisers still use newspapers at all. Print is cost-ineffective. and the most indeterminate for performance.”

It’s much more likely that, rather than a jump in newspaper ads caused by either the RSPT, the federal election, the fervour of The Capital Post or an unlikely return to the profligate spending of the Howard era, Australian newspapers will witness their share of total advertising spend tumble by a third, as free-to-air TV continues its dominance.

As most broadcast media executives would agree, free-to-air’s command of government ads dovetails nicely with Rudd and Abbott’s political messages delivered as 30-second soundbites on the 6pm news.

Why would advertisers want to spend their dollars in a shrinking market? Slack standards of ‘narrative provision’ do seem to backfire on the perpetrators.
I love the irony of the editorial wayzegoose, mysterious indeed, with political leaders invited along to mull over the situation.

Barbara, by shrinking market do you mean the most eyeballs of any media in the country? Yep read it ( and I do mean mean Read it) and weep…this constant bagging by both Crikey ( no agenda there) and ill informed on line subscribers is getting tiresome…if you wnat a shrinking market try FTA TV, if it’s fragmentaion you’re after try on line…if you want lots of eyeballs..newspapers are the go…..

PS Down and Out…love the Yep in red and underlined and all, but you’re wrong…