We love Ben Fordham. Almost as much as Channel Nine loves Ben Fordham, which has lately boosted him up the network's increasingly rickety star ladder. But he's well deserving of a Wankley.

We love Ben Fordham. Almost as much as Channel Nine loves Ben Fordham, which has lately boosted him up the network’s increasingly rickety star ladder.

It’s the versatility of the star A Current Affair reporter that makes him such an asset to the network. One week he can be standing up to Sydney nightclub kingpin (and Underbelly star) John Ibrahim — deftly stringing out a ‘no comment’ into a 10-minute “ACA exclusive”, as Media Watch pointed out on Monday … 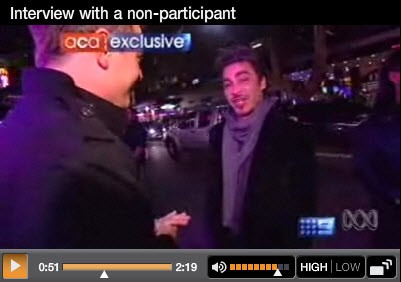 … next week he’s suiting up to step in for Tracey Grimshaw as ACA host in Melbourne, at ease under the bright studio lights, aside from one back-stage scare documented on Twitter …:

@BenFordham Just had my innocence shattered in the wardrobe dept of Channel 9 Melbourne when I saw someone cleaning the headless body of Plucka Duck.

But Ben landed one of his best postings (save for the wilds of West Papua in search of Wa Wa) just this week. Location: Canberra — where Ben joined the big guns of Australian political reporting in the parliamentary press gallery. Standing in for Laurie Oakes.

On Tuesday Ben reported Kevin Rudd’s poll pain and declared: “It could be the final fortnight of parliament before the election.”

But last night came the scoop: Rudd’s broken promise to meet Hornsby Hospital doctor Richard Harris over the “concentration camp”-like conditions on the wards. Ben confronted the PM — Harris had been tweeting the prime minister and he hadn’t responded. Sydney’s Peter Overton crossed live to Ben on the scene:

Overton: “…the PM is not happy with this story?”

Fordham: “No, he made that pretty clear to me last night, Pete, but Kevin Rudd can’t have it both ways on this. He uses Twitter to promote himself and also to promote official government policy, but when a doctor contacts him via Twitter to try and get him to keep a promise, Kevin Rudd says that Twitter doesn’t count.” 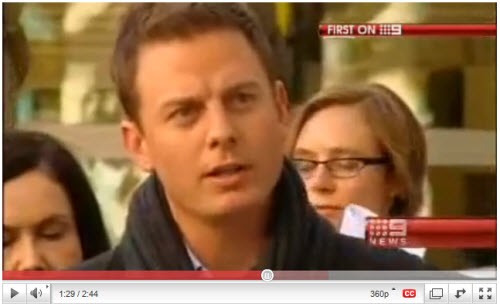 As Ben tweeted on Wednesday:

@BenFordham Filling in for the legend Laurie Oakes at the moment for Nine News in Canberra. I keep asking myself…”what would Laurie do?”

Well, we can’t be sure, but probably not that story, Ben. Maybe tweet him to find out in future.

Err..actually Crikey, the wankley should probably be split between Ben Fordam and whoever came up with the header. “And the Wankley goes to… Ben Fordham. No Laurie Oakes. ”

What’s poor Laurie ever done to Mick the subbie? 🙂

What a lot of sacrosanct nonsense from you ‘cutting edge’ reporters. Get off your asses and visit Hornsby Hospital before you start spouting this nonsense.
What a load of horseshit from you guys.

Lazy reporting, stupid commentary. Get a life and go see what the poor patients of Hornsby have to put up with. Shame on you guys, shame!

erm, isn’t the point that fordham f*cked up the story on frippery?

I’m so sick and tried of reading about Ben Fordham’s praises in the media,he is an absolute joke for a reporter,his interview with John Ibrahim was a joke ,talk about trying to SUCK UP to John,you could clearly see John didn’t want to talk to him,then the next day he’s on 2UE boasting about how he did his pathetic interview then went inside to his club and had a drink with him. In regard’s to Hornsby Hospital Yes the place needs alot of help. but what Hospital dosen’t in NSW. I really can’t understand how Channel Nine can have a JOKE of a reporter on TV most Weeks when he’s up on chargers of being a supposed HITMAN FOR ACA in his bogus sunglasses,why don’t we hear anymore about that court case,maybe its because Channel Nine are hoping everyone will forget about it by the time its gets to court,but anyway they (Channel Nine) will block any stories or BLOGS about it like they have done in the past,the thing is everyone that watched it in 2007 and Ben’s big broadcast about that him and his producer are getting arrested over it could see that it was a set up by Ben and his Producer and they should both be locked up over it,the problem is they’ll get a slap on the wrist and a fine,what a jokemore then likely. I wonder if they will do a SPECIAL INVESTIGATIVE story on ACA about there court case. Anyway this would be a perfect time for the other Networks to make a JOKE OF BEN FORDHAM ON CAMERA Like he does to everyone else that he forces himself onto for a interview.

LIstened to the Laurie Oakes wannabe on MTR where he is filling in for Vizard. What a nasty little man, using radio to attack all and sundry. He was raving on about the Catholics down in Tasmania and paedophilia – with the claim that the Archbishop down there was complaining that senior Catholics were whining about the effects of sexual abuse. Fair enough, I thought – they can cop it sweet.
However, he went on and on about this issue so I went to the Mercury website to see the story. Well, you guessed it – what Fordham was raving on about was NOTHING like the Mercury story where the Archbishop has issued an apology and statement to not just the victims but also the 70000 Tasmanians who access services under the Church every year. There was no mention of senior Catholics which Fordham found convenient to link into the Belgium story and he made no mention of the apology statement.
Don’t care who likes Catholics or who doesn’t but Fordham is vile in his attack and made no effort to represent the truth. Why am I so dark? Because ACA killed Benny Mendoza – a fix-it man of ethnic background who hung himself after becoming the subject of an ACA story in the 1990’s.
For the Benny Mendozas of the world, the Ben Fordhams of the world should be made as accountable as they purport to make everyone else.