Millions of Australians were ‘gutted’ by Australia’s 4-0 drubbing at the hands of Germany on Monday morning. But the loss was even more devastating for one small group in particular: Australian marketers, who have committed millions to World Cup 2010 sponsorships.

For them, the game against Ghana next Saturday night is ‘must win’, not only for the Socceroos but also for their brand investments.

At its simplest level, sponsorship of the World Cup offers marketers an opportunity to have their brands exposed frequently to a large number of potential customers at a cost that may be considerably less than buying advertising space or time. But many are also seeking to enhance brand equity by linking their brands to the imagery and emotions that consumers associate with the event overall or the Australian team.

Actual amounts paid by sponsors of the Socceroos as they try to capitalise on the exposure and capture these intangible associations at the World Cup are subject to commercial confidentiality, and guarded far more closely than the German strikers were last Monday. But industry sources suggest Football Australia now receives at least $20 million in annual revenue from sponsorships of the A-League and the Socceroos, and probably much more in a World Cup year.

And a common rule-of-thumb in relation to sponsorship suggests a marketer should spend at least as much in ‘activating’ sponsorship — that is, in promotional activities and advertising to ensure that target consumers are aware of the sponsorship — as they pay the team or sporting body. So the stakes are very high.

The brands that have the most to lose if the Socceroos don’t make it past the Group stage are those that have sought to associate themselves — emotionally and in terms of image — to the Socceroos’ gallant quest to reach the later stages of the World Cup against the giants of world football.

But the way in which the team fails to progress — for example, bowing out gallantly after close tussles against Ghana and Serbia, versus collapsing in a heap with recriminations flying — will potentially matter even more. Even the contributions of individual players will be important.

Sanitarium’s Weet-Bix, which has identified itself strongly as the “official breakfast of the Socceroos” and sought to link its “Aussie kids” positioning with the spirit of the Socceroos, looks like the biggest loser by far. 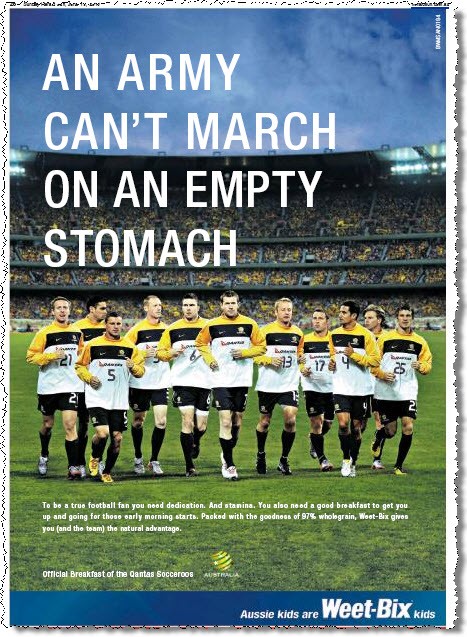 Against Germany, and in the days since, the Socceroos have looked like a dog’s breakfast. But even worse, Weet-Bix has focused its sponsorship activation efforts — product packaging, special limited edition tins, TV advertising and a dedicated web presence — around Socceroo Tim Cahill.

Cahill’s red card send-off may turn out to have been his last appearance at the tournament, and his teary media performances afterwards are sadly not the image Weet-Bix would have been seeking to put in front of “Aussie kids”.

Weet-Bix competitor, Kellogg’s Nutri-Grain, has put its faith in Harry Kewell to enhance its “iron man food” positioning through the World Cup. After the 2006 World Cup, Kewell ranked behind only Ian Thorpe as a desirable sponsorship property, according to the twice-yearly rankings published by Sweeney Research in its Sweeney Sports Report.

As Nutri-Grain is not an official FFA sponsor, its sponsorship success is less critically dependent on how the Socceroos perform. But Kewell’s non-appearance in the Germany game, ongoing doubts about his ongoing groin injury, rumours of a rift with coach Pim Verbeek and — most recently — his angry press performance overnight surely aren’t doing his sponsors any favours. Then again, they don’t claim to be “iron groin food”, do they?

And what about the official naming rights sponsor of the ‘Qantas Socceroos’? Qantas has perhaps less at stake in South Africa than many other sponsors. Should the team be eliminated early, Qantas may choose to cut its losses by pulling some of its Socceroos-themed ‘feel good’ advertising, but Australian consumers have long expected Qantas to be the official carrier and/or supporter of national representative teams, win or lose. Theirs is a long-term strategy and one that won’t come crashing down to earth if the team crashes out.

From the brains behind Rhonda and Kevin07, how to sell climate change

Can Australia ditch its bogan image?

Good luck to anybody sponsoring mens soccer in Oz. It’s a sport I don’t take seriously and even less so when I read about the farcical management of it and the prima donnas playing it.

On the other hand, Matildas may be a different proposition altogether.

Hopefully this experience will teach marketers that we don’t need sportspeople to tell us what to buy or think. I haven’t bought Weet-bix or Nutri-Grain for about 10 years because I refuse to acknowledge the tax-sucking parasites, who do nothing for society that promotes them.

World Roundball Cup, the contest which occasionally invites Australia to assemble a team from throughout the diaspora to provide a bit of colour in the first round.

Craig Johnston, that great Aussie soccer player of yesteryear (actually born in South Africa, raised in Newcastle, NSW and taught the sport in England, but let’s call him Aussie for now), once spoke at an club where I was a member. That was at least 25 years back.

The main recollection I have is his observation that Australia is too well off to raise great soccer players, because there are beaches and jobs available. His contention was that the best soccer players come from nations where millions have nothing to do but to amuse themselves with a round ball, because jobs and beaches are eternally out of reach. From such a large pool, the best will become superstars, whereas in Australia, the best will be at the beach, pulling chicks or whatever the current phrase is.

So, breakfast food manufacturers spread their bets, putting a bit on many sports. And that is the way things will remain.

^ Carig Johnson hit the nail on the head.

The best sportspeople are those with something to prove, either to themselves or somebody else. Maybe that’s why the Matildas are doing so well.

Soccer in Oz is kept alive by Lowy pumping his own money into it. When that stops it will slip back into the amateur status it deserves.

You can always rely on Crikey readers for comedy relief!

And let’s try a few other propositions:

“Rugby League in Oz is kept alive by gambling addicts and drunks pumping their money into leagues clubs. When that stops it will slip back into the amateur status it deserves.”

“AFL in Oz is kept alive by the same xenophobic delusion that leads Yanks to describe a largely domestic competition as “The World Series”. When that stops it will slip back into the amateur status it deserves.”

“Rugby Union in Oz is kept alive by … ” I dunno, can a zombie be described as “alive”?