Steve Fielding's buffoonery in the paid parental leave debate has given way to something altogether more offensive. Labor has a special responsibility to put him last this election.

There’s never been any doubt Steve Fielding is a prize idiot. His idea of senatorial behaviour has chiefly revolved around ludicrous stunts, apparently random voting and trying to inject himself into any debate going, frequently on the most offensive terms.

None of which would, under most circumstances, be an obstacle to a successful political career.

Yesterday, however, he managed to reach a new low beyond buffoonery, reaching into malice and gender hatred that appalled even right-wingers in the Senate.

Fielding, interviewed by the ABC this morning, showed a remarkable gutlessness in insisting he hadn’t been the first to suggest that women might become pregnant and then have abortions entirely for the purpose of accessing paid parental leave.

Wrong. Fielding was the first to raise the issue. “Drug addicts and welfare cheats can get pregnant, then after 20 weeks have an abortion and still pocket the government’s cash,” he said in his speech before the bill had gone into committee. He was the first person to raise the issue despite numerous senators on all sides debating the bill on Tuesday and before him yesterday.

And in fact, Fielding has been spouting malicious garbage about paid parental leave since at least Tuesday morning when, on the doors, he said the government’s scheme “is putting prisoners and prostitutes ahead of stay-at-home mums”.

The line didn’t really get the sort of media run Fielding is used to, so he had another go yesterday, tweeting:

About to talk in the Senate about PPL. The govt is giving prisoners and prostitutes the payment while stay at home mums get nothing

Welcome to Steve Fielding’s version of the Madonna-whore complex: stay-at-home mums and prostitutes and prisoners.

Quite how people in prison or on welfare or in marginalised employment are going to get access to parental leave wasn’t something Fielding offered to explain.

Even more conservative members of the Coalition have woken up to what Joe Hockey understood several years ago when he was workplace relations minister — that paid parental leave is a workforce participation measure, not a social policy. It’s about the fact that we desperately need to maximise the number of skilled people in our workforce (or as Hockey put it more simply “we’re running out of workers”). Support for stay-at-home mothers, whatever the rationale for it might be, is a wholly separate issue.

Not, apparently, for Fielding, who happily equates working women with prostitutes and prisoners.

But it wasn’t on such fraught and admittedly complex gender and social issues that Fielding made his stand, but on the line that women would deliberately get pregnant and then abort in order to obtain benefits under the scheme.

Sarah Silverman has a joke: “I want to get an abortion. But my boyfriend and I are having trouble conceiving.” Fielding must have heard her and thought she was serious.

And just to show he has real class, Fielding did it in the context of debate around access to the scheme in the event a baby is stillborn.

Even strong pro-life advocate Barnaby Joyce (who, unlike a lot of conservatives, takes his pro-life convictions seriously enough to be a dogged opponent of the death penalty), was outraged:

What are your motives on this one, Senator Fielding? What are you trying to do here today? What is your motivation? Is this a sincere and honest approach on which you have spent a period of time lobbying people, discussing the issues and going through the proper mechanisms and processes? Have you done that, Senator Fielding? Or have you just brought in a highly emotive issue without actually consulting or doing the footwork? What is your primary motivation? Can you tell the chamber about all the people that you have discussed this with? Can you tell the chamber about all the lobbying you have done on this issue? Or is this merely a political ploy of yours? If it is, I think it is absolutely disgusting.

We don’t know what Stephen Conroy thinks of Fielding’s efforts yesterday. Which is a pity, because Conroy, in particular, and the Victorian Labor Party more broadly, are the Dr Frankensteins responsible for this creature, stitched together in 2004 from half-baked political smart-arsery and anti-Green sentiment.

True, other parties can claim a bit of the credit — both the Australian Democrats and Meg Lees’ political deathbed lash at her old party, the ‘Australian Progressive Alliance’ — preferenced Family First (candidates: Fielding and Danny Nalliah) as well. But Labor can claim credit for ensuring Fielding was elevated with Labor preferences ahead of the Greens’ David Risstrom.

Labor has a special responsibility for Fielding. His malicious intervention yesterday shows he is no longer simply a buffoon, he seems eager to incite hatred of women. Labor should now face the same demand that the Liberals faced in relation to Pauline Hanson and One Nation back in the early years of the Howard Government. They must put Family First last on all how-to-vote cards in the forthcoming election.

The Liberal Party — some quickly, some like John Howard not so quickly — eventually did the right thing in refusing to preference One Nation. Labor should show it has similar resolve to put Fielding last. 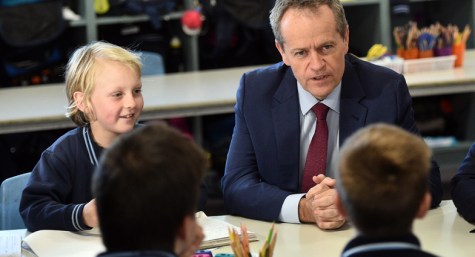 Finally a win for government on middle-class welfare

Three seats in doubt, but Hasluck will probably decide the race

Not only is he nasty-minded he can’t even think his imaginary scenarios though. Call me devious-minded, but wouldn’t the point of ‘addicts and welfare cheats’ having children for social security benefits be to a have steady long-term income?

Well put, Bernard. But it shouldn’t just be Labor that should be told to put the fundamentalists last – the Liberals should face the same demand. As you say, they eventually did the right thing with One Nation, otherwise we would have had David Oldfield in the Senate. Family First should go the same way.

Labor has a special responsibility for Fielding

The ultimate responsibility rests with everyone who lazily votes above the line in the Senate, and in so doing puts their preferences in the hands of these clowns.

Fielding is a perfect example of why people should take the time to vote below the line. I will have him last on my ballot paper and Conroy just above. I was going to vote green but after they voted down the ETS they lost my vote. I dont care if they thought it was a dog of a scheme it would have made the idea and the implementation of doing something acceptable to the broader public. High ideals, so called , may sound ok but nil result on any level is backward. Thanks for this article and the only point of difference I make is the random voting pattern of Fielding as he almost always votes with the opposition. Being offensive is one thing but to compound it by being moronic shows how odd/weird Family first or maybe just Fielding is.