Who’s gonna save me? The Oils are gone, and the oil spill won’t stop

Twenty years ago Midnight Oil sang out to Exxon Oil executives in New York City. With the latest oil spill not stopping, who's going to save us now, asks < Stuart Nettle?

Twenty years ago it happened. Well, 20 years and two weeks to be precise, May 30, 1990, at lunch time. On Sixth Avenue New York a flatbed truck pulled up outside the headquarters for Exxon Oil and five men got out.

A year before an oil tanker owned by Exxon Oil, the Exxon Valdez, struck a reef off Alaska and spilled 41 million litres of oil along 2100 kilometres of coastline in Prince William Sound. It was, at the time, the largest oil spill in US waters and Exxon was widely criticised for not doing enough to clean up the spill or to compensate the victims of the disaster.

The five men were the members of Midnight Oil. They jumped onto the back of the parked truck, plugged in their equipment and played an impromptu hour-long set to a stunned crowd. The police stood back not knowing what to do, the lunchtime workers danced and sang. Between songs Peter Garrett launched diatribes at the Exxon executives holed up across the road and the images were beamed around the world. It was audacious guerrilla action and perhaps the largest act of monkey wrenching the musical world has ever seen. Midnight Oil, the Antipodean agitators pointing the fingers at the powers that be.

Now, let’s jump forward 20 years — give or take a few weeks — and take a look at two events that have just occurred, yet are closely related to the surprise gig of 1990.

The first is, of course, the oil leak in the Gulf of Mexico. An oil rig operated by British Petroleum exploded on April 20 and the well is spilling oil into the sea at the rate of 11 million litres per day. Within five days it had surpassed the Exxon Valdez incident as the worst spill in US waters. It’s been 55 days and the spill rate is not easing, dwarfing it’s predecessor in terms of volume and spread.

Oil has now washed ashore on the coasts of Louisiana, Mississippi, Alabama and Florida, and authorities are worried that it will reach the environmentally sensitive Florida Keys. It’s a dire scenario, yet with no solution forthcoming it’s one that seems all too likely to occur.

The second event is that our federal government, of which Peter Garrett is now a minister, has approved oil exploration leases off the south-west coast of Western Australia, in regions that Garrett himself flagged as marine reserves only months before. Western Australia had an oil leak recently when the Montara oil platform leaked into the Timor Sea. If that leak were to happen within the new areas of exploration, there would be oil making landfall from Cape Leeuwin to Cape Naturaliste. Picture the images you are presently seeing on the nightly news and give them a domestic twist.

It pains me to see that Garrett, the one standing on the back of the flatbed truck inspiring the masses, and this Garrett, ideologically neutered and politically compromised. It’s tragic, yet I don’t blame him — the artist has liberty while the politician only accountability. But still, I think people have a right to ask what happened; he promised so much yet delivered so little. What happened?

But there’s another question and, considering the BP oil spill, it is equally pertinent: where is the next Midnight Oil? Where are the intelligent and socially aware music acts able, as Midnight Oil were, to unite and inspire? Where are the people willing to take a risk and use their position to protest publicly?

Because there’s a pipe leaking in the Gulf and an empty parking space in front of BP’s world headquarters.

Our quietly spreading Exxon Valdez in the Timor Sea 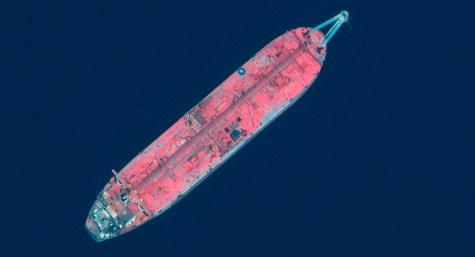 Off the coast of Yemen, a timebomb bigger than the Exxon Valdez is primed to explode

Now, it seems that we must add “leakage” to the attributes. Gas leaks methane gas, oils leak oils.

More old pyjama’s. PG has always been a stooge.

You were very kind to Peter G: “artists have liberty but politicians only face accountability”. … hmm.. begs the question then: why bother being one?

Mr G will go down in Australian Political history as one of the most blatant hypocrites of all. He might have gone into politics hoping to have an influence, he might have had high ideals. But the question must be asked; why does he stay? Probably because the pay is good.

Of course it is normal to have to bend on some things. Of course if you are in a team, you do not always get your way. But when does “compromise” become “too much compromise”? When do you just say “I cant do this any more!” ?

Uranium mining, oil exploration in sensitive areas, approving the dredging of Port Phillip Bay, approving Gunn’s pulp mill,… the list is tragic and ridiculous. If he is saving his gun powder for the big fight, I think the train has already past the OK Corral.

One man swallows his pride, puts on a suit and trys to make a small difference; the other yells at the capitalist pigs from a flat bed truck – I know which one actually makes a difference.

I agree and it is a long game. I believe Peter Garrett has and continues to show great integrity. Take the pink batts media beatup and the fact that what culpability exists belongs with the PM. And therein lies his problem, and our (Australia’s) loss. Kevin Rudd doesn’t particularly like PG and doesn’t trust him (like he doesn’t trust most of the Labor front bench). Given that Penny Wong has been pretty awful (and talk about people tuning out to anything a polly says…). Come the change from a Rudd regime to some other (Gillard, Tanner) when the government decides to act with more courage–please, please be sometime in the second term–then Garrett may yet come into his own.
He is one of the better communicators despite very difficult circumstances.