It hasn't taken Rupert Murdoch long to call in the IOU he holds for supporting David Cameron. Plus, a ripper of a day at the stock exchange, says Nine News, Google goes old-school and other media snippets.

Murdoch wants bigger UK TV share. It hasn’t taken Rupert Murdoch long to call in the IOU he holds for supporting David Cameron. He wants to take control of BSkyB, Europe’s dominant commercial TV business, in a deal with close to $A20 billion. It will be an unwelcome distraction for the new government, which is poised to cut more than £30 billion from spending in next Tuesday’s Budget. Any move to give advantage to a company, while asking voters to absorb cuts that could cost each British family £1000 pounds will be a big ask for the new government.

Murdoch is looking for a regulatory pay off for The Sun, The Times and the News Of The World providing strong support for the Conservatives in the recent poll (but not the Liberal-Democrats, whom the Murdoch papers savaged and tried to undermine). Murdoch and News dropped the Labour Party, which they had supported since the 1997 poll that swept Tony Blair into office, and switched to the Conservatives. Now that marker is being called in.

So now we know what Murdoch planned to do with the billions of dollars in cash sitting on his balance sheet: try and buy back the farm in the shape of a rejected £12 billion bid for BSkyB, 39% owned by News Corp. A successful bid would see News pay about £7 billion to other shareholders, or well over $US10 billion.  The offer, worth about $US18 billion, dwarfs the $US6 billion he paid for the Wall Street Journal, which was subsequently halved by asset write-downs and impairments of $US3 billion.

News Corp had about $8 billion in cash on its balance sheet at the end of the March quarter. The company has been vague about what could be done with it, but at the recent results announcement executives left analysts with the impression it could be looked at later in the year. It had gross debt of about $US13 billion. A takeover play of this size didn’t enter into any post-results thinking. BSkyB is valued at $US15.5 billion on the London Stock Exchange; its shares took a run late last month when rumours of a deal first appeared. — Glenn Dyer

All Ords rise — considerably. It was a big day on the stock exchange on Friday — the All Ords were up, according to Nine News in Melbourne, more than 40,000 points! 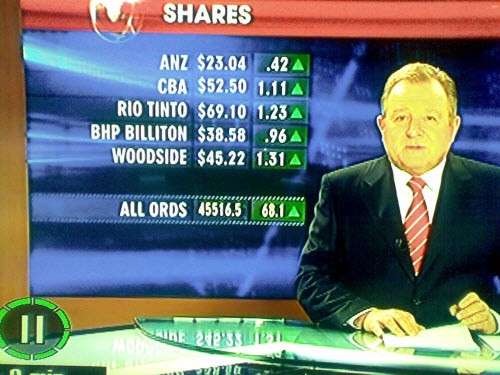 “Starting today, a small percentage of Google News users will find a new box of content with that label, curated not by Google’s news algorithm, but by real live human news editors at partner news organisations.” — Nieman Journalism Lab

What you won’t see on Apple’s iPad

“Banned in its cultural shift are literary illustrations of gay couples making [out], and of Ulysses. Allowed are heteros-xual couples making out and swimsuit editions.” — Gawker

“… News Corporation said Monday that it had acquired an e-reading platform called Skiff and had made an investment in a company that manages pay models for newspapers and magazines.” — New York Times

“Remember the MTV VJ? That’s so two decades ago. Now the network is looking to hire its first TJ, or Twitter Jockey.” — San Fransisco Chronicle

“MasterChef judge Matt Preston is in negotiations to make his mark as host of a TV talk show.” — Herald Sun