Tabloid TV is in bed with Gerry Harvey, the affable billionaire who can self-interestedly rattle off at length on anything to do with furniture at very low prices. Like bedding bargains in his own store!

Tabloid TV has always been in bed with Gerry Harvey, the affable billionaire who can self-interestedly rattle off at length on that staple of current affairs television — furniture, whitegoods and consumer electronics at low, low prices.

Last week he jumped into bed with A Current Affair. Literally. Helping “road test” bedding bargains in his own stores: “$2,000 off! What a deal,” he exclaims. Almost as good a deal as having a free three-and-a-half minute ad for your business run on prime-time television dressed up as ‘current affairs’. 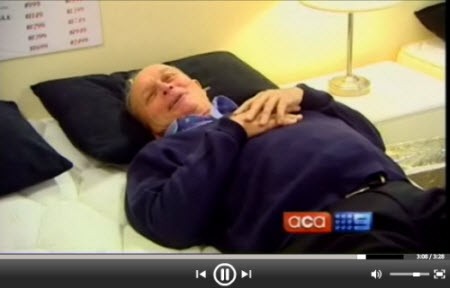 And there was more to come. This week, “Australia’s retail king” switched networks to appear on Today Tonight to sell some more loot at crazy prices, out of the goodness of his own heart. As host Matthew White told us: “Gerry Harvey wants to help — and he’s going undercover to get it done.”

Yes, there’s Gerry having a new face plastered on to shop in disguise and test his own staff’s customer service … 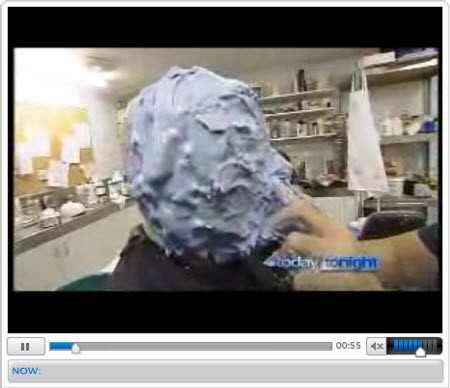 A day later, there he is on Today Tonight again, “under fire” for the stunt. Another chance to talk up his retail empire:

“This is good for us. We’re going to up our service, we’re more conscious now, and it’ll be a good thing.”

So when Gerry Harvey says Kevin Rudd isn’t particularly good at selling his message on the mining tax, he should know. As he told an Australian National Retailers Association function yesterday:

“Probably it [the resource super profits tax] does make some sense. But you know, with how they presented it, the timing, you just think these blokes are bloody amateurs. You would expect them to put a bit more thought into it because it has just blown up in their face. They might have the right story but they just haven’t told us the right way.”

Harvey is certainly no amateur. Rudd can only wish he was as shameless a salesman as Gerry, a Wankley-winning campaign if  ever we saw one.

Gerry should know that what is often being sold is only apparent later. Case in point is Gerry’s own business, which is less a trade in electronic and household items than credit. The 3D TV is the selling-tactic nestling the longer-term strategy of interest payments. Rudd’s strategy might well be less about “selling” the RSPT than forming the basis of a new settlement between the government and mining. It may also be about sidelining the Liberals as a viable opposition and making the mining bosses its political opposition.

I still remember Gerry’s ‘grand plan’ for obtaining the workers required prior to the 2007 election – bring people from overseas and pay them half as much as Australians. He asserted, that while the Coalition didn’t say so publicly, many liked the idea? We started a campaign against this(writing to newspapers etc) and Joe Hockey allegedly got his staff to work to check us out????I have the same opinion of Gerry as I do of the Opposition – they’d bring back worst choices, and it would be horrific.
I think that while the Rudd govt could’ve gone about selling the RSPT better, I also get the message, that Gerry’s assertion is phase 2 of the wealthy against making these tax laws fairer. They couldn’t lie straight in bed! I don’t like him one bit!

he’s also another multi-millionaire welfare bludger. remember phase one of the stimulus package to ensure retail spending remained bouyant. Guess who was the big beneficiary of that: Harvey Norman. And only recently he was trying to get his ginormous, shameless snout into the public trough for all his racing cronies. What a useless parasite he is. And as for Harvey Norman, try Bing Lee. Try the Good Guys. The only things you’ll get at Harvey Norman are high prices and the world’s worst customer service.

@MR SQUID – I check his prices, and then go to the stores that you mentioned! I find the staff at those stores more friendly and helpful than at Harvey Norman anyway. I’d forgotten about the monies/guarantees etc for bludgers like him re the stimulus package.

Gerry Harvey – what happens when you give a bogan a billion dollars…. he rips off his own kind, and acts like he’s entitled…