Fairfax skirts terror — and the law — on junket kickbacks

Next month, a group of Melbourne real estate agents will jet off on an all-expenses paid trip to Amsterdam, Prague and Berlin as special guests of the Fairfax media empire. For an outlay of just $19,500, according to the tour brochure, the revellers will enjoy “world-class hotels, top restaurants and bars” — and promotions in The Age worth three times that amount.

The annual trips are notorious for tales of illicit activity that push the boundaries of good taste — for agents they’re a chance to sample some risqué culture far from the genteel suburbs where they ply their trade. But for Fairfax, these junkets are one of the last remaining links with the dwindling “rivers of gold” that prop up the company’s profits.

Originally titled “Target Russia 2010” until the itinerary was changed amid terrorism fears, the trip promises an “adventure filled experience” as a reward for ads placed between December and July. They’re just one part of Fairfax’s reinvigorated push to keep the rivers flowing as rivals News Limited and The Weekly Review, run by Age turncoat Antony Catalano, prowl relentlessly for revenue. 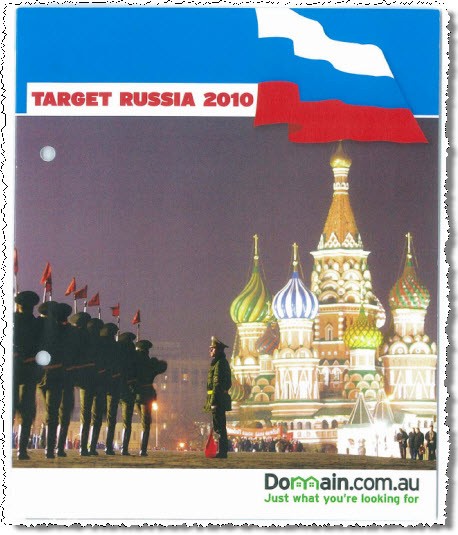 Since The Weekly Review launched in April, Fairfax has embarked on a massive marketing spend involving millions in incentives to stop agents defecting. But the measures could also test the limits of the law.

Official advice obtained from Consumer Affairs Victoria suggests the European trip, and a number of other schemes, may fall foul of the Estate Agents Act that prohibits agents from retaining kickbacks from media companies. Under the Act, agents that fail to pass on benefits to sellers — and the companies that pay them — are liable for prosecution if the benefit is tied to vendor spend. It is, after all, the vendors that pay for the ads that keep Fairfax afloat.

Fairfax admits the junkets provide “benefits and growth opportunities”. But because that benefit accrues from “corporate” ads — rather than its more lucrative property listings — the company claims they have no case to answer.

One agent has told industry colleagues that he recently found himself with an extra $100,000 to lock in a new advertising deal. “You have to laugh, one minute we are not worthy of any money and then a little competition emerges and they’re offering us four times what we received in the past,” the agent said.

Another leading bayside and eastern suburbs franchise secured an additional $700,000 on top of $500,000 in largess booked each year since 2004. Some of those benefits include free advertising.

Another, bound by a confidentiality agreement, was handed $30,000 in “discounts, layovers and benefits” which was later upped to $60,000.

“They didn’t care how it was used. We could use it to sponsor a sales conference or sales training,” the agent said.

In the smoke and mirrors world of real estate advertising, the line between marketing payments and kickbacks is a murky one. Vendors pay for their ad which is ordered by the agent. The agent makes most of their money by creaming a commission of up to 2% — or $20,000 — on the sale of a $1 million property. But in the 10 years before kickbacks were outlawed, agents enjoyed another honey pot — multi-million dollar advertising rebates of between 5% and 25%. Further commissions paid by Fairfax to the agencies that actually booked the ad were also passed on.

Some agents got rich, to the tune of $10 million a year each, on Fairfax’s teat. While sellers were told about the payments in the fine print, mostly they remained in the dark.

When the law was amended in 2004, Fairfax exploited loopholes to ensure their long-time clients didn’t jump ship. Under a scheme dubbed the “Real Estate Marketing Alliance” (referred to cynically by one agent as a “rebate in drag”), agents were paid to promote The Age, real estate brand Domain and the glossy Melbourne Weekly on ‘Sold’ signs, in in-house publications, and even Age clocks attached to shopfronts. Sponsored sales conferences, seminars and golf days swiftly became the norm.

Ironically, it was Catalano, in his former role as The Age‘s real estate director, that masterminded the program that is now being resurrected. But despite being involved in shaping and executing contracts with over 50 agents, he refused to shed any light on how the deals were structured.

“I’m not really interested in discussing the legalities or otherwise of The Age’s Marketing Alliance – that’s an issue for Fairfax. As far as I am concerned I developed a program which in the company’s opinion was legal and as far as I’m concerned, as the person responsible for it at the time, I went to great lengths to ensure it was managed within the strict guidelines that were set,’’ Catalano said.

When asked why he developed the program: “The Age has always been a strong brand and when the legislation was introduced preventing agents from retaining rebates…we looked to develop a marketing strategy that involved agents promoting the virtues of advertising in The Age. Obviously agents talk to buyers and sellers directly and rather than a TV, radio or outdoor campaign I thought the best way to communicate our message was through agents to the advertisers.”

Asked whether it was true that the initial $6 million paid to agents was the same as The Age’s entire above-the-line marketing budget, Catalano wouldn’t comment.

“I am very comfortable that in the time I managed the Marketing Alliance Program it did not offend the legislation,’’ he said.

Crikey spoke to a former Age marketing manager who said there was tension between the bucket of cash allocated to the Alliance, which was Catalano’s baby and protected by its legal department, and the paper’s senior management. Those tensions are said to have eventually led to his departure from the company.

Fairfax, who did not respond to our requests for comment, is believed to have ploughed around $30 million into its below-the-line scheme. But were shareholders getting value for money? For that amount, media buyers say, the company could have afforded to permanently plaster Melbourne’s inner suburbs in outdoor advertising.

In one infamous case, an inner city agent continues to receive $180,000 each year to stay loyal. Despite defecting in part to the Herald Sun, the payments have continued, with the company deleting its logo in the Herald Sun to avoid breaching the deal.

As the decade drew to a close, the Alliance was wound back from more than 50 agents to under 20 as Fairfax’s share price was battered by the GFC. The $6 million annual bucket looked more like $3 million. But the arrival of The Weekly Review meant Fairfax radars were pricked again.

The company has recently begun offering cheap or free over-sized ads and corporate ad space. Last month, Crikey revealed Melbourne Weekly staff were directly courting vendors who had advertised in The Weekly Review, but whose houses had failed to sell, with free offers worth $6,750. That approach could still be probed by the Australian Competition and Consumer Commission under predatory pricing statutes.

But for those on the other side of the fence, retribution has been swift, with Weekly Review shareholders turning on Age staff amid a barrage of angry emails seen by Crikey. Jellis Craig, Marshall White, Bennison Mackinnon and Kay & Burton have all had their invitation to the European trip revoked, and are now planning a rival jaunt.

“The fundamental fact is that these kind of arrangements, in a roundabout way, are designed to glean income away from the vendors. It’s just smoke and mirrors.”

Morrell says that without a pool of sellers clambering to offload houses in a red hot property market, the agents would never be invited on the Fairfax jet in the first place. And with some top agents spending $10 million a year with the company, the distinction between corporate ads plugging the agents’ brand and ads placed on vendors’ behalf is a blurry one.

But it isn’t just Fairfax in Morrell’s sights. On Inside Business last weekend he suggested that Weekly Review shareholders were also receiving “rebates” in the form of profits made by the magazine. Those too, Morrell said, should be passed on to vendors.

In any case, it seems Consumer Affairs Victoria, a subsidiary of the Department of Justice helmed by Tony Robinson, is reluctant to act, with its shoestring budget making an in-depth probe unlikely.

For the moment at least, Fairfax and its gilded real estate accomplices appear to be home and hosed.

One agent has told industry colleagues that he recently found himself with an extra $100,000 to lock in a new advertising deal. “You have to laugh, one minute we are not worthy of any money and then a little competition emerges and they’re offering us four times what we received in the past,” the agent said.

Is this reporting? If so, is it first hand? If not, why the quote?

Or is this just Age bashing?