Billionaires look out of place at RSPT rally

Andrew "Twiggy" Forrest did his best to disguise his billions by dressing like a common or garden mining worker. It didn't work. Plus, a sleep update for Rudd and other business news.

A sick sight. Australia’s richest woman on the back of a truck using a megaphone to shout “axe the tax” must rank highly on any list of this country’s most revolting sights. Rarely has a billionaire exposed naked self interest in as ugly fashion as Gina Rinehart did in Perth yesterday. And only just behind on the list must come Andrew “Twiggy” Forrest doing his best to disguise his billions by dressing like a common or garden mining worker. It brought me close to puking just to look at and hear the pair of them on television. Double the mining tax for the greedy b’s is what I say!

Dropouts making things look better. A modest little fall in the unemployment rate as the growth of full time jobs continued is better news than the opposite but this is clearly a very slow and gradual economic recovery. The unemployment rate in May of 5.2 per cent is still the same as it was in January while the participation rate has gone down in that five months by 0.2 percentage points and at May’s 61.7% the proportion of eligible Australians in the work force has dropped from the 62.6% it was at when the Labor Government won office. 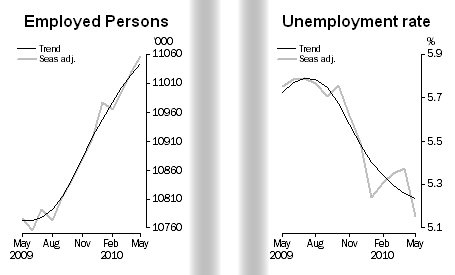 Not that figures like that are of the slightest interest to those economists who see virtue in wanting to impose harshness on others. They were out quickly after the release of the Australian Bureau of Statistics positively salivating at the prospect of there being another couple of interest rate rises before year’s end.

Sleep in for safety — another sleep update. No news for Kevin today from the annual SLEEP conference but something for the road safety boffins to consider. A new study found that earlier high school start times are associated with higher teen car crash rates.

National Public Radio reporting from the conference in San Antonio reports that researchers compared two neighboring cities in Virginia with similar racial and income demographics: Virginia Beach, where the high school day began at 7:20 a.m., and Chesapeake, where classes began 80 minutes later. Using 2008 data from the Virginia Department of Motor Vehicles, researchers found that the car crash rate for 16- to 18-year-olds was about 41 percent higher in Virginia Beach.

Though the study isn’t proof, researchers figure the difference may be due to sleep deprivation and a disruption of teens’ internal clocks. He might not be a teenager but thank goodness Kevin has a chauffeur!

Those useless polls. A little bit more for the opinion polls freaks to consider following on my little piece yesterday. I have done a little summary comparing the performance of Newspolls from those 10 out (about 3 months) from the actual poll right up until the last before the election. Judge for yourself but I find them no help at all in predicting what happens. 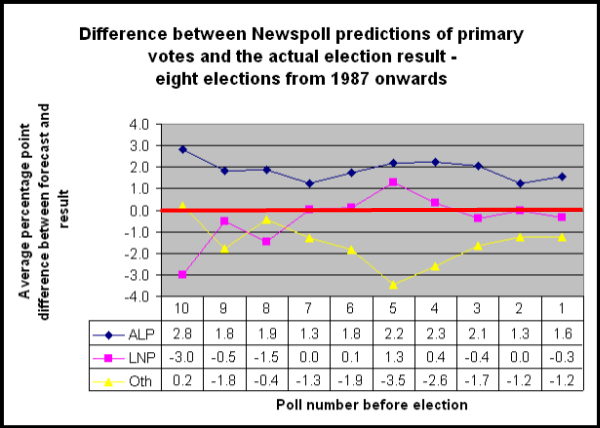 Perhaps we can conclude that the most consistent feature is that the vote for minor parties is understated throughout the period but I am loathe to make much of it because we are only looking at a sample of what happened in the course of eight elections. That’s too small a sample to be definite about anything.

Conspiracy theorists might want to see something in the Labor vote being higher in the polls than the actual vote received but I very much doubt that is so.

For anyone wanting to fiddle around with the date for themselves I will post it this evening to my blog. I hope you have fun.

No US cap and trade. The United States Senate has virtually given up on trying to get legislation through for a cap and trade scheme on carbon emissions. It is is impossible now consider how much harder it will be when Democrat numbers in the Congress are reduced after the November election.

As I said yesterday, the Morgan poll was consistently closest to the actual election result in 2007, almost exact. Followed by the punters odds.

Re Sleep in for safety.

It is a proven scientific fact and every parent knows it from bitter experience that teenagers struggle with mornings.

Sweden has done the work and has actually reacted to the science and secondary schools now start an hour later which is on the american data better for road safety but it is importantly better for the kids education.

So lets see what we have here science did the experiment ..came up with an answer … the government acted on the science ..problem solved …anyone else wondering why that doesn’t happen more often ..and why it hasn’t happened here for our secondary school children.