The focus returns to Kevin

With the media focus more and more on Kevin Rudd, the many weeks of near parity with Tony Abbott’s coverage now seems well in the past. But no one could escape Sex and the City.

The focus more and more on Kevin Rudd, with the many weeks of near parity with Tony Abbott’s coverage now seeming well in the past, interesting to see if the Opposition continued to lay relatively low, particularly if some kind of modification is made to the RSPT and the caravan moves on.

Clearly there’s nothing of use left to say about the NSW Government other than, if the vast majority of people choose to take no interest in the political process, then they’ll get the politicians they deserve. How about a bit of mutual obligation when it comes to voting?

Martin Ferguson taking more of a frontline role in selling the RSPT, and we won’t say anything about what that says about the clarity of the previous main salesman, Stephen Conroy’s battle with Google moves him up the list, with the internet filter remaining a problem issue for the government in many online fora. 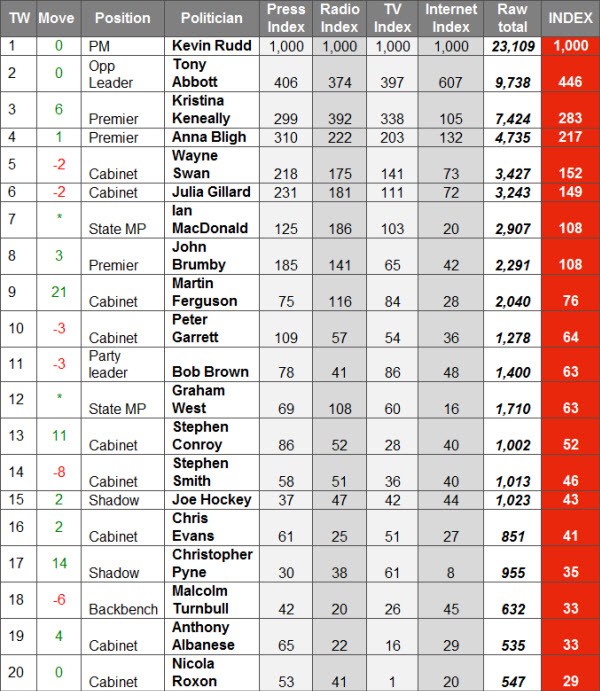 The talkback calls remain less than flattering towards the Prime Minister, again interesting to see the big gap that has developed between the leaders in volume of calls.

At last, we have reached the apex of Western civilisation — thanks girls, my only question, how are they going to make SATC 3 even better?